In the lead up to the big game tomorrow night, I thought I'd throw out some more data/charts that I've been tracking for those who are interested. To start this is a picture of Wake's shooting by player and distance in ACC play. These are pulled together from the Fox Sports play-by-play logs, they give a distance for each shot and although I'm sure they aren't perfect it at least gives a little insight as to what kind of shots each player is taking (layups and dunks I've filled in as 1 ft as they don't have a distance). First and foremost, John Collins is a monster close to the basket, and it's good to see that shot has been the primary focus of the team. After that the next best shot is a Keyshawn Woods three. We have a bunch of guys that are hovering just below 40% from three, which is pretty good, but unfortunately Mitoglou hasn't been able to put that part of his game together, even though he's hitting most of the long two pointers he's taking.

I haven't been tracking this for other teams along the way, but this is a family rivalry game for me, so last week I had put the same chart together for my dad, just updated it last night.

The big takeaway is how good Mitchell is and how many threes he takes, he shoots nearly the same percentage as Woods but takes twice as many shots which is pretty impressive. Their big men are very efficient around the basket and no one seems to dominate the ball down low, good balance there. Tony Hicks hasn't played much since the beginning of ACC play, was just looking to include everyone that had a significant amount of shots (which meant Greg McClinton got left out for us, only 7 shots in ACC play despite playing some important minutes the last couple games). One last thing that caught my eye, Wilbekin and McMahon are like the same player in terms of shooting %, Wilbekin does take more shots, but just thought it was funny that they both are solid three point shooters and really struggle inside the arc (yes I know, McMahon hardly takes any, still enjoyed how similar those stats looked).

Lastly, here are the shooting plots as a team (Louisville in red, Wake in blue). I wanted to include both top and bottom rows as the top highlights more clearly where the bulk of the shots are coming from, while the second shows how the selection area comes together. As a team Wake seems to struggle in the 11-16 foot range, while Louisville doesn't have as much of a pattern across that same range. And while Wake is worse in that range, at least they take fewer shots from the area. Wake takes only 10% of their shots from 11-16 feet, while Louisville takes about 15%. 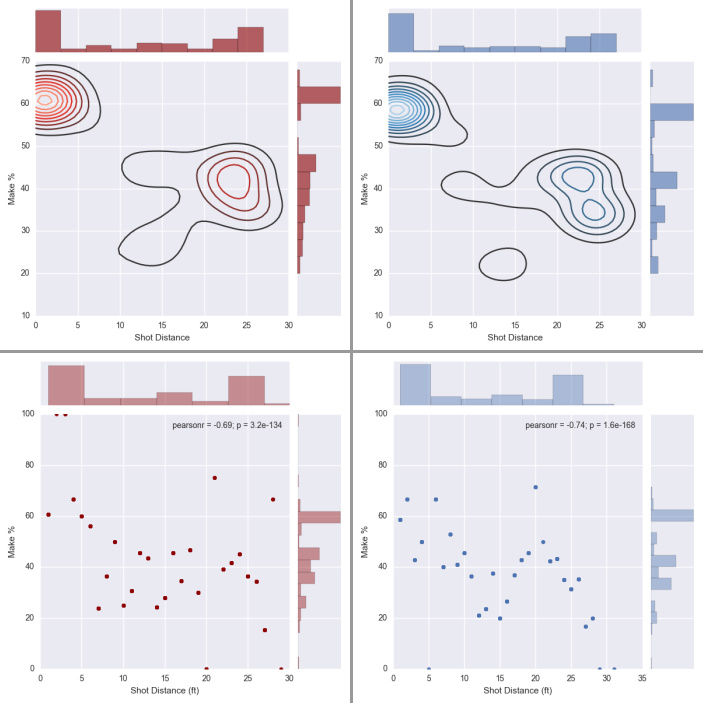 Hopefully some found this interesting, and here's to hoping Wake can slow down Mitchell to pull off the upset.