A week after hoisting the Junior Wimbledon trophy at London's historic grass courts, Noah Rubin has chosen his next court to conquer: Wake Forest University.

The Long Island native announced on Twitter than he is joining the Demon Deacons. The top-ranked player in the 2014 class chose Wake over perennial tennis powerhouse Virginia.

After a very difficult decision I have decided to take my tennis to Wake Forest University. Thank you for all the support!

"It is a small campus with a personalized feel. I can learn from [head coach Tony Bresky]. He can improve my game. I also like the other guys on the team," Rubin said.

The 5-9 Rubin compares his game to other all-court grinders like David Ferrer and Lleyton Hewitt. When asked about his biggest strength, he stated without hesitation, "My mental game. It allows me to compete with powerful players who are 6-3."

Rubin peaked at No. 6 in the ITF junior rankings, but has only participated in junior Grand Slams during the past year-most of his peers play 20 ITF tournaments a year. Instead, he has focused on professional Futures tournaments to improve his ATP ranking. Because his ITF ranking wasn't high enough, he didn't qualify for the main draw. Rubin, however, won eight straight matches in route to Wimbledon championship and defeated compatriot Stefan Kozlov 6-5, 4-6, 6-3 in the final. 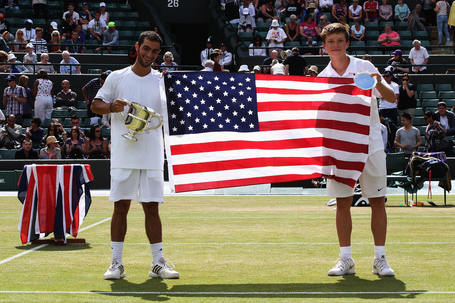 Until recently, the world No. 536 player had planned on skipping college and going pro.

The 18-year-old added, "My father, my coach Lawrence Kleger and I sat down and looked at the data. In the past, 18 and 19 year old players were competing and winning Grand Slams. Now, the best players are 27-30 years old."

In recent years, college has become a strong development system for American tennis players, with success stories like John Isner and Steve Johnson. But Rubin-who is interested in taking classes in business and photography-only expects to stick around in Winston-Salem for one year, and then go pro, "It's the best plan for me to develop on and off the court."

When asked about his goals as a Demon Deacon, he stated, "I want to win a national championship here at Wake. And I want to refine my game."

The speedy baseliner projects as a strong All-ACC candidate and top-of-the-lineup clog, but was quick to say, "I will play wherever coach puts me. I'm going to do what it takes to make this team better."

With the additions of Rubin and Tunisian blue-chipper Skander Mansouri, the Demon Deacons expect to improve on their 15-14 record and a trip to the NCAA round of 32. Wake returns five of their six starters including All-ACC players Romain Bogaerts and Maksim Kan.

Rubin also looks forward to competing in the Winston-Salem Open scheduled for August 16-23. His goal, however, is to get a main draw entry in the US Open near his home in New York the following week.

For the rest of the summer, Rubin will continue to play tournaments and train at the John McEnroe Academy. The future Demon Deacon often works with the seven-time Grand Slam singles champion, himself. Rubin cites that McEnroe has imparted different strategies to pressure an opponent besides blasting them off the court. Short for a tennis player, the right-hander has become craftier by using court angles to dictate play.

When asked if he learned how to properly shout at chair umpires from McEnroe, Rubin chuckled and said, "I just focus on the match and my opponent."