Construction on McCreary Indoor Facility Set to Begin in August

Share All sharing options for: Construction on McCreary Indoor Facility Set to Begin in August

Graduate Bob McCreary, for whom the scoreboard at BB&T Field is named, donated $7.5 million to Wake Forest to provide for a new indoor facility designed to benefit Wake athletes across the board. The major team which will benefit from this center is the football team, as the center will feature a 120 yard artificial turf field. One of the major goals of the center is to allow teams to participate year-round in a state-of-the-art facility regardless of the weather.

The center will be behind the Miller Center on the main campus and will sit next to the currently existing practice fields, which will remain in their present location. The facility will cost approximately $21 million to complete and in addition to McCreary's sizable donation is funded by donations from the Wake Will capital campaign.

The addition of the facility will hopefully provide a spark to football recruiting and keep Wake Forest's overall facilities on the cutting edge of competitive D-1 football. Recruits are used to being wooed and wowed when they visit campuses and with schools pulling out all the stops to ensure they land their coveted targets, it is a bare necessity for Wake to have a football center on par with other ACC schools. As a practical matter the center will allow the football team to practice at full efficiency rain or shine, warm or cold. The indoor practice field is an invaluable part of any football team's facilities in 2014 recruiting.

Currently the football staff is housed in the Pruitt Football Center, adjacent to the Miller Center, and the team practices at the Doc Martin Practice Complex which has two natural fields and one artificial turf field. Presumably the teams will continue to use these facilities in some capacity, particularly the Martin Complex, while the new McCreary Facility will merely supplement the current setup.

A groundbreaking ceremony will be announced at a later date and the project is scheduled to be completed by the end of 2015. 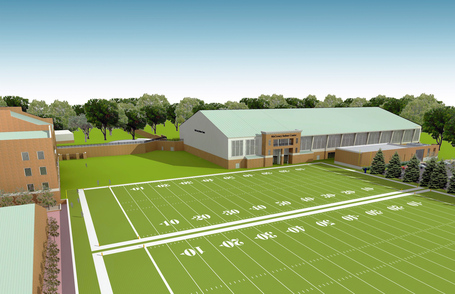 An artist's rendering of the new McCreary Facility, with the Miller Center on the left side and the Doc Martin Practice Complex in the foreground.