Catching up with Ish Smith

As the inaugural Legends Basketball Classic, hosted by former Deacon greats Ish Smith and Josh Howard, draws near, Ish took some time out of his schedule to discuss his season with the Phoenix Suns, his new charity and Wake basketball - past and present - with BSD.

Share All sharing options for: Catching up with Ish Smith

After completing his fourth and most successful season in the NBA with the Phoenix Suns, Ish Smith decided to team up with another Wake Forest legend, Josh Howard, to bring some excitement back to Winston-Salem.  When asked what spurred creating the Legends Basketball Classic, Ish responded "me and Josh, we talked about it, let’s bring the buzz back man. I see Carolina, they're having an alumni game, Duke is bringing their guys back to do a fantasy camp. Let’s do something fun."

He continued "it was a crazy run we went on, you know with Chris (Paul), Justin (Gray), Eric (Williams) – even going back to Josh (Howard) – the Coach Prosser era was unbelievable. And then Coach Gaudio took over and we played really, really well.  We had a crazy buzz.  All around the country people were talking about Wake Forest, people wanted to come to Wake.  You guys, Tie-Dye Nation, were un-freaking-believable."

With this in mind, Howard and Smith have successfully put together an event that includes many Deacons from the past ranging from Antwan Scott and Taron Downey to Al-Farouq Aminu and Jeff Teague. This will all take place at the Coliseum Annex in Winston-Salem on June 28th at 4:00 pm. The proceeds from the event will go to the Ish Smith Foundation and Josh Howard Foundation.  As Ish's foundation is in its beginning stages, he described it as a program designed to give kids funding for extracurricular activities in order to keep them active and off the streets or their couches.

In each of Smith's first three NBA seasons he played for two different teams, so his appearance in 70 games for the Suns in his fourth season was a welcomed change.  The Suns also experienced some welcomed changes as a team.  Coming off a season in which the Suns won only 25 games, the expectations were low for 2013-2014.  However, they managed to turn it around completely under new coach Jeff Hornacek and ended up barely missing the playoffs in the brutal Western Conference with a 48-34 record.  The biggest factor in the change according to Ish was chemistry.  "We bought into what Coach Hornacek and our whole coaching staff preached and the organization did a good job of putting this together and it just kinda clicked.  Now the next thing is to get better and improve on this year."

Smith also claimed that while all the teams he has been a part of so far (7) have been great, the Suns organization is the best of the bunch. "The organization we have, they just cater to us.  Our owner is involved 100%. Before the OKC game we worked out together and I had a really good game, so every time I see him he says "you know you had a big game because I worked out with you beforehand."  He continued, "They've catered to all of us.  They've given us whatever we have needed to be successful.  And I was just lucky enough this year to be with the best organization, the best training staff that I have seen thus far in my career."

Since Ish also happens to be teammates with another super speedy point guard, Eric Bledsoe, I asked who would win in a footrace between the two.  In true Mr. Nice Guy form, he answered "I'll be politically correct and say we tie."  Kevin Durant may disagree, as he proclaimed Ish as the fastest player in the NBA in a tweet during the season.

Ish also spoke about some of his favorite memories from his time at Wake Forest.  As the only player in Demon Deacon history with over 1,000 points and 600 assists, he mentioned his two most memorable games.  "The last game we won with Coach Prosser as my coach.  My freshman year, the Georgia Tech game.  I had 13 points and 15 assists, remember it like it was yesterday.   That was the last game we won for Coach before he passed away."  You may also recall that game as the Harvey Hale overtime game in which Hale and Mike Drum and GT's Anthony Morrow  went back and forth in an opening round ACC tournament game in Tampa that the Deacs pulled out in overtime.

The other game Ish mentioned of course was the Texas game, his last win as a Deacon in which he sunk his patented mid-range buzzer beating jumper over the arms of Avery Bradley to give Wake their last NCAA tourney win to date. "We should’ve actually beaten them in regulation" Smith explained.   "We had the game in control and kind of let it slip away.  We were all resilient.  That’s one thing about the group I was with.  LD (Williams), Chas (McFarland), Weave (David Weaver), that whole senior class.  We weren't expected to be good so we just kind of put our hardhat on."

Further reflecting on his time playing in the ACC, Smith mentioned that it wasn't Duke's Cameron Indoor Stadium that was the toughest venue for him.  "To me it was NC State and Maryland. NC State, those fans were right behind you and they didn’t care what was said.  Maryland was also tough – Comcast Center seats so many – it's loud and it's rowdy and they say whatever they want.  Cameron was ok – they had great fans, but they were a little more respectful, whereas Maryland and NC State would say anything."

Finally, as Wake Forest ushers in the Danny Manning era Ish is hoping this new yearly event will help provide a boost to get the excitement back in Tie Dye Nation.  He explained that Manning held a conference call with former players that he couldn't make due to travel, but is encouraged by what he has seen and heard thus far.

"I’m excited.  He played in Phoenix as well.  The twins Marcus and Markieff (Morris, Ish's teammates in Phoenix) say nothing but good things about him.  They said he was the real reason why they went to Kansas.  I think Danny will do a great job.  He has the resouces. He’s recruited, he’s coached in the Big 12, then he went and turned that Tulsa team around and had them in the big dance this year.  I'm excited." 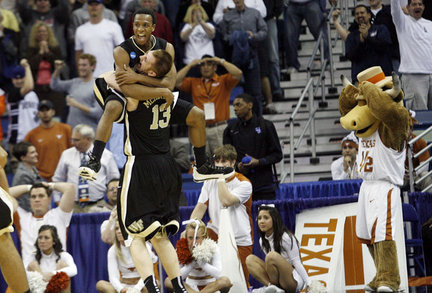 I would like to thank Ish for taking the time to chat with us about a variety of topics as he continues his offseason training in LA.  If you are in the area Saturday, June 28th, I encourage you to get out and see many former Deacon greats while supporting a fantastic cause at the same time. For ticket info, please see the official announcement here.