ACC Football Head Coaches: The Relationship Between Salary and Success

An analysis between the relationship between salary and success in ACC football.

Share All sharing options for: ACC Football Head Coaches: The Relationship Between Salary and Success

As we analyzed last month in basketball, how much does a coach's salary factor into on-field results? Does the university get a return on its investment on football coaches? Does the more a school spends result in higher success, which is quantified through win percentage?

Below is a list for the salary of ACC head coaches.

Note: The salaries are from USA Today's report on coach's salaries of 2013 and from Coaches Hot Seat.

Note: These numbers do not include endorsements, only what the university pays.

Note: Bobby Petrino signed a contract for $3.5 million per year, but for numerical purposes, I used Strong's salary to provide accurate data. 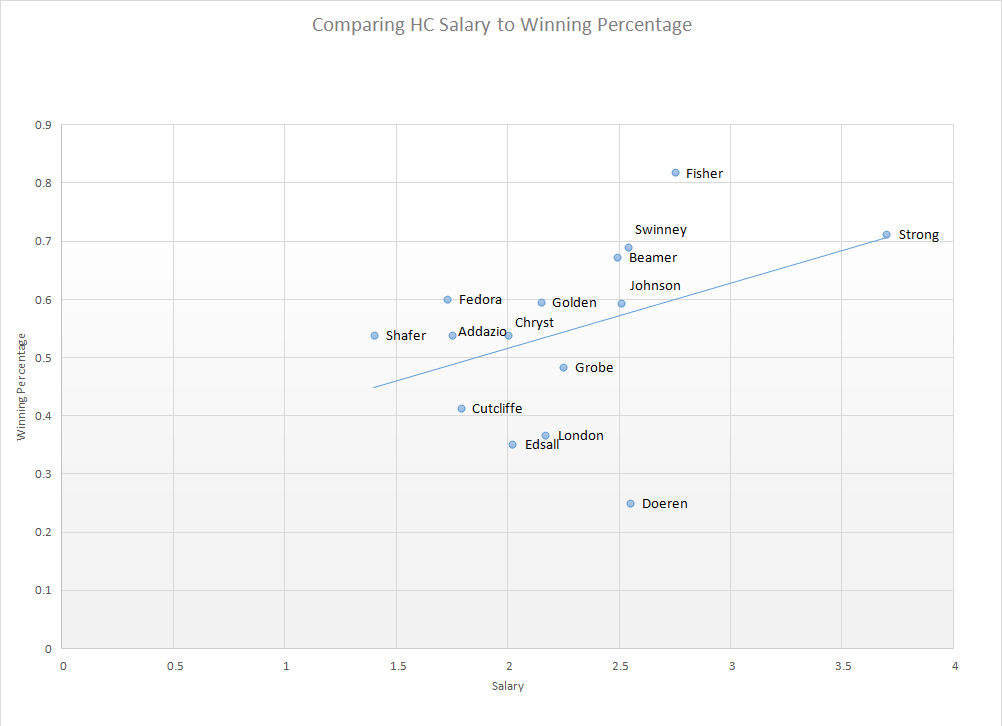 While there is a clear relationship between salary and winning percentage, the correlation is far less than basketball (.58). The most logical theory revolves around the small sample size in 12 game seasons.

With three first-year ACC football coaches, there isn't enough data yet to analyze their results. Dealt with a hand of cards played by your predecessor, new head coaches have a limited impact in the team's win-loss record. While Steve Addazio and Scott Shafer remarkably put together winning seasons-the two lowest-paid head coaches-Dave Doeren finished a disnal 3-9. Doeren is the third-highest paid coach, but but shouldn't receive full criticism for the meltdown in Raleigh. A grace period is necessary to match up schemes and personnel. 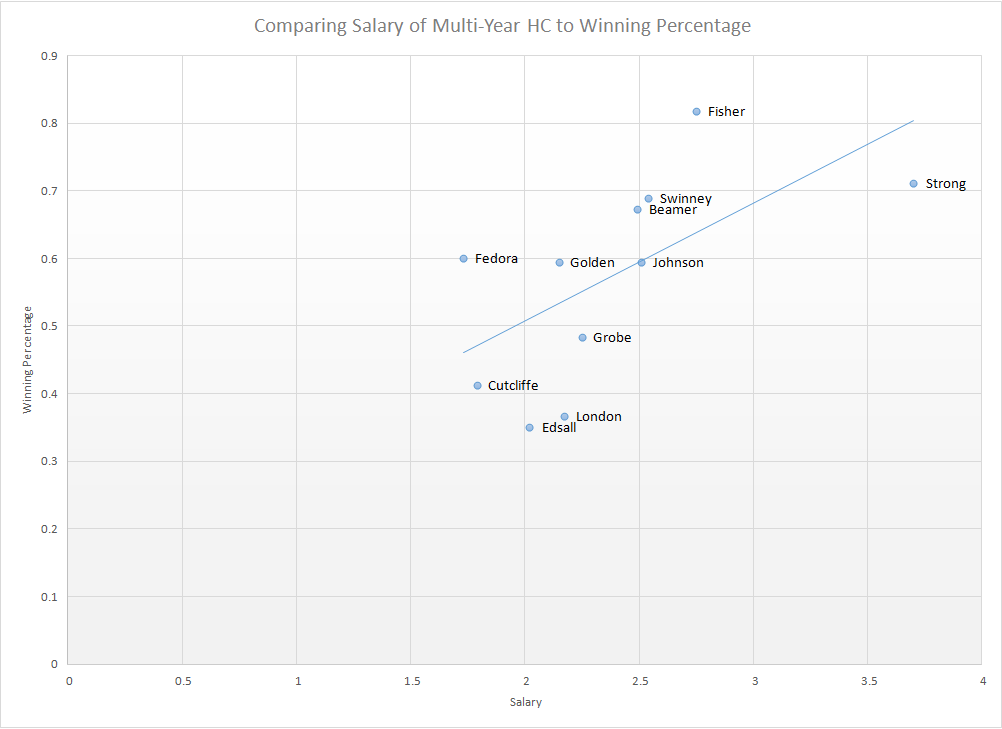 Once first-year coaches are removed from the data, the correlation increases more than 50 percent. This proves that in time, winning percentages converge toward their coaching salaries. The ACC's top four coaches in winning percentage are all among the top five in salary for multi-year head coaches.. In fact, the top six-Strong, Fisher, Swinney, Johnson, Beamer and Grobe-are the only coaches to lead their respective programs to a BCS bowl.

In the bottom half, both Mike London and Randy Edsall are sitting on a burning stove, while Larry Fedora and Al Golden look like keepers. Both are liberated from NCAA violations and have begun to establish winning traditions.

While they have won games early in their tenure, most coaches need several years to foster a winning environment. This time frame varies by each program’s tradition and expectations. David Cutcliffe, for example, has a .413 winning percentage (keep in mind, recently-fired Steve Donahue had a .415 winning percentage coaching Boston College basketball). Yet he has restored a moribund Duke program in his six seasons in Durham and has recently been linked to higher profile jobs. However, his Blue Devils failed to reach a bowl game until his fifth season and did not finish over .500 until his sixth year. It took Cutcliffe a full recruiting cycle to develop talent and properly employ his intricate schemes. Like Duke's majestic 2013 run, Wake Forest's immortalized ACC Championship came in Jim Grobe's sixth season. The best coach in Wake's history, Grobe lost more games than he won.

Additionally, in a demanding sport like football-with 22 starters and 85 scholarship players-a university's historical competitiveness plays a substantial role in future success. It's important in basketball, but one recruit can reverse the fortunes of a program. The linear projection above claims that Fisher, Swinney and Beamer are vastly underpaid, while Cutcliffe and Grobe are substantially overpaid. Sure, the trio represents the class of the ACC. And yes, they have kept the conference nationally competitive. But due to a revered reputation, established recruiting patterns and large team budget, their wins against conference opponents come easier against programs with less resources and tradition.

A head coach’s salary has a clear impact on future success, as evidenced through winning percentage. But the definition of success varies at each school. Florida State and Clemson expect BCS bids, while Boston College and Syracuse are content with bowl bids. Also, major programs like Florida State and Clemson pay their coaches more than the conference’s cellar-dwellers. Thus, to determine a coach’s success it is also important to look beyond the numbers and analyze the school’s respective circumstances.