ACC Basketball Head Coaches: The Relationship Between Salary and Success

Share All sharing options for: ACC Basketball Head Coaches: The Relationship Between Salary and Success

Considering that the ACC is considered as a basketball-first conference, I was surprised that only one state in the conference, North Carolina, was among those 13. And to add to my bewilderment, the highest paid state employee strolls the sideline for the Wolfpack, not the Tar Heels.

(Other basketball states include obvious choices like Indiana, Arizona and Kentucky. Some surprises include my home state of New Jersey. Our good tax money is funding, yes, that very Rutgers basketball team... I digress.)

It is true that the ACC has several private schools that are not included in the list-far more than the Big Ten's one-but the conference still has nine public schools, including both Louisville and Maryland for these purposes.

After scouring through these results, I wanted to further analyze the relationship between a coach's salary and his success in the ACC. To represent success, I used the career winning percentage at their current job.

Through these measures, I displayed the correlation between the head coach's salary in the ACC and his team's success on the court.

Note: The salaries are only what the university pays the head coaches. They do not include endorsement deals. The data comes from USA Today's report on head coach's salaries in 2013.

Also, private school figures are not released to the public, so the numbers above are from media reports. Click on the head coach as they appear below to go to the source 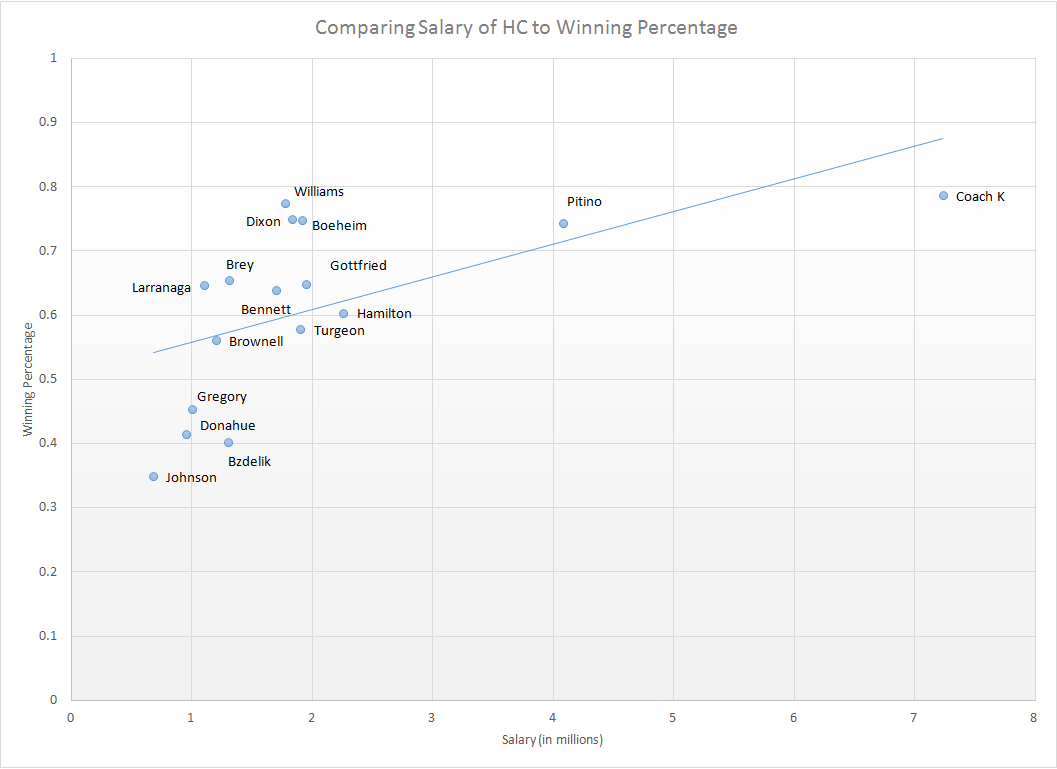 1. Coach K is the highest paid coach in college sports-making almost $2 million more than Nick Saban-and is worth every penny.

3. While $2.25 million looks like a lot for Leonard Hamilton, he brought an ACC championship to Florida State-a school that puts most of its athletic resources into football.

4. Jamie Dixon's winning percentage of 75% is greater than legends like Jim Boeheim and Rick Pitino.

5. Roy Williams and Boeheim are both huge bargains for their respective universities. While they receive hundreds of thousands in sponsorship contracts with Nike, their schools pay them less than $2 million per year.

6. Mike Brey and Jim Larranaga are the bargains on the list with winning percentages near 65% and salaries just over $1 million.

7. While Brey and Larranaga panned out, they are surrounded by grenades-the jury is out on Brian Gregory and Brad Brownell-who have low winning percentages as head coach.

8. Three of the six lowest paid head coaches from last season are no longer head coaches at the university: Jeff Bzdelik, Steve Donahue, and James Johnson. 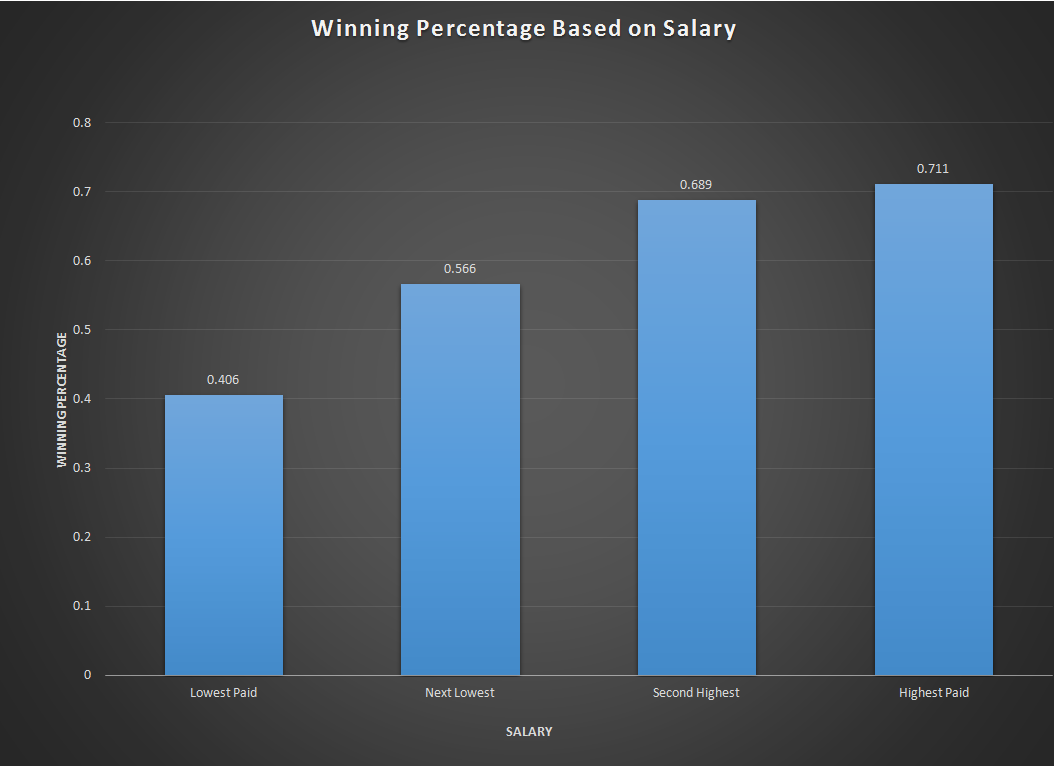 9. As seen by the bar graph above, there is not a substantial difference between the highest paid coaches and the second highest group of coaches. The average difference is equivalent to about two games out of 100.

10. Meanwhile, the drop off from the second group to the third group is substantial equaling over 12 games out of 100- roughly four games a year.

While it is not essential to pay the most for a head coach to sustain consistent success (Virginia Tech, however disagrees shelling out $2.3 million for Buzz Williams), it is imperative for a program to pay its coach in the top half of the ACC. Sure, Notre Dame and Miami have bargains with Mike Brey and Jim Larranaga but they are the exceptions. The data proves that a miss rate on a low-paid head coach is far more likely than a success story.

Within the top two tiers, the miss-rate is slim to none. Out of the nine ACC head coaches with salaries at $1.7 million or up, only one has a winning percentage under 60 percent: Mark Turgeon at 57.8 percent.

Sure, the school's tradition, its location and its recruiting patterns are important, but the paycheck is what attracts a coach and builds a program. Virginia Tech, a school with limited basketball tradition, coughed up major cash and got a proven commodity in Williams. Meanwhile their in-state rival paid up for Tony Bennett. This season, Bennett led Virginia to its first sole regular season conference championship since 1981 and conference tournament win since 1976. What tradition?

As the old saying goes, you get what you pay for.