What does the resume of an ACC coach look like? How have the recent coaching hires performed with their new teams?

Share All sharing options for: Statistical Analysis of ACC Basketball Hires in the Last Five Seasons

With Jeff Bzdelik likely on the way out, now is the time to look at possible candidates. But instead of looking at specific coaches to replace Bzdelik, I wanted to target qualities and resumes for potential replacements through recent ACC hires. For this reason, I have compiled data from all ACC basketball hires in the last five seasons and analyzed the hire based on on-court and recruiting success.

The allure of coaching in arguably the country's best conference has drawn some of the best coaches in the game. Even football schools like Clemson and Miami brought in respected, high-level mid-major coaches-Brad Brownell and Jim Larranga, respectively-due to the opportunities for NCAA tournament and recruiting success in the ACC.

Virginia's Tony Bennett came from an up-and-coming Washington State team. During his tenure, the Cougars shook up the PAC 10 hierarchy and took the Huskie dominant state by storm. The Cavaliers have adopted Bennett's methodical, defensive-oriented identity, improving in all of his five seasons, culminating in regular season and ACC tournament titles this season. Bennett has also dominated on the recruiting trail.

Maryland's Mark Turgeon left a Texas A&M team that qualified for four straight NCAA tournaments to replace the legend Gary Williams. In the midst of a controversial move to the Big Ten, Turgeon has continued to win on the recruiting trail. After an up-and-down first three seasons, Turgeon is confident Maryland will contend in the near future.

Meanwhile, NC State's Mark Gottfried made the NCAA tournament five times with his alma mater Alabama, but was forced to resign midseason due to an administrative disagreement. Since joining the Wolfpack, Gottfried has won 24 games in back-to-back seasons and has signed three straight Top 25 recruiting classes.

In his time with the Hurricanes, Larranaga has accomplished what no one had done since Skip Prosser's Demon Deacons in 2003, unanimously beat out Duke and UNC for the regular season conference title. Larranaga has reinvigorated the program and should bring the youthful Hurricanes back into contention in the coming years.

Brownell and Brian Gregory from Georgia Tech have had considerable success on the recruiting trail. Brownell's Clemson team finished in the upper half of the ACC and made the NIT, while the Yellow Jackets have fought admirably after a slew of injuries to top players. Expect Georgia Tech to come back strong next year.

Notes: The recruiting averages were compiled using ESPN.com's recruiting rankings. Unrated recruits were tabulated as 1-stars, while junior college and European players were not incorporated into the numbers. 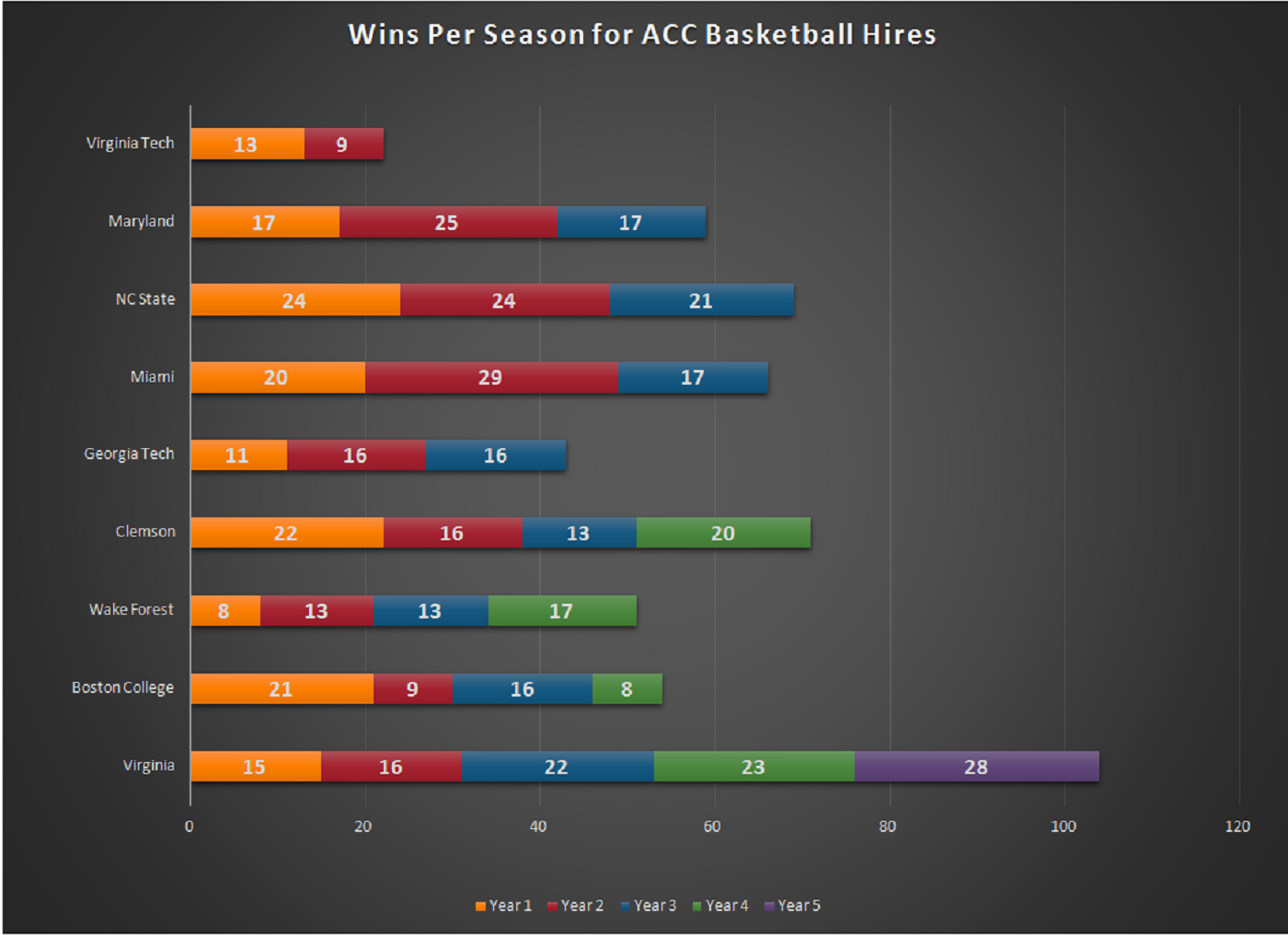 Back to Wake Forest. The statistics are damning for Ron Wellman's hire. Every other ACC head coach hired in the last five years made the NCAA tournament at their prior gig (not including James Johnson who was an assistant coach) and the average is 2.13 NCAA berths. Additionally, every other head coach had a winning record at their prior stop, with an average winning percentage of 60.25%. Bzdelik, meanwhile, won at a 38.30% clip in Boulder.

Wellman has a chance for redemption. A chance to bring a prideful school with a strong basketball tradition back to respectability.

This time, hire a guy who fits the criteria for an ACC head coach.