National Signing Day is tomorrow. Check out where each of the future Demon Deacons went to high school.

Share All sharing options for: Geographical Breakdown of 2014 Recruiting Class

By now you've seen the names, faces and positions of Wake Forest's 2014 recruiting class, but the BSD crew figured we would help you visualize where we are getting our next group of Demon Deacons. Using Google's Map Engine, we were able to put together a map that will visualize the recruiting trail. 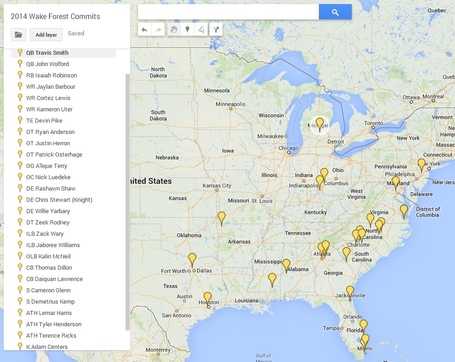 Interactive Map of the 2014 recruiting class. I hope to be able to add Lovejoy High School in Hampton, Georgia to that map, as that is where star linebacker prospect Demarquis Gates attends high school. The high 3-star prospect will announce his decision tomorrow at 8 a.m. according to Alex McCarthy.

h/t to Dan Lyons of Nunes Magician who inspired me to create a Wake Forest map.

This was our first time using the feature, so please let us know what you think.

As always, please be sure to follow Blogger So Dear for the latest breaking news regarding National Signing Day. Also, be sure to check out our story stream of all Wake Forest recruiting news.