After years of anticipation and debate, the dominoes are finally falling.

For decades, the NCAA has enacted legislation that shines the shoes of the biggest, most powerful universities. Due to billion dollar television deals and 100,000 seat stadiums, the NCAA has exacerbated this pattern in recent years.

In his book released on October 16th called "The (Peculiar) Economics of NCAA Basketball," Wake Forest Economics Professor Todd McFall discusses the NCAA’s repeated favoritism towards schools with the largest economic influence. After decades of mismanagement and complacency, he argues, the NCAA is paying the price. 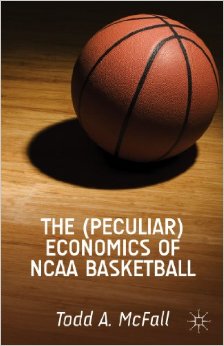 "All 11 teams were members of a Power conference," Prof. McFall said.

With television dollars and attendance figures on the rise, the NCAA has continued to develop innovative ways to further the chasm between the haves and have nots. In 2002, the NCAA implemented the pod system, which has allowed the NCAA to schedule more games near campus.

The benefits of UNC playing a tournament game in Greensboro, NC are obvious- increased ticket sales and a more intimate environment. What is not so obvious, however, is its impact on the game’s outcome.

According to Prof. McFall’s research, teams ranked in the Top 8 perform 3.5 points better when playing in-state.

"Big conference teams are getting these in-state assignments," Prof. McFall said. "It provides an advantage for teams and might move the needle later in the tournament."

With experience playing in hostile ACC crowds, Wake Forest power forward Daniel Green said, "Playing against top opponents when the crowds are against you is tough. It makes you think more about your game. It affects your attitude and your performance."

Through the pod system, Prof. McFall claims, the NCAA is stacking the deck in games that are already David and Goliath matchups. With its business interests in mind, the NCAA continues to put the top seeds- often with the largest fan support- in favorable positions to win. This results in increased ticket sales and television viewership in the later rounds.

Prof. McFall said, "The NCAA is not doing its best to make the tournament competitive. This does not foster uncertainty in its competitions."

With tournament revenues equaling $750 million, the NCAA has a vested interest in traditional powerhouses advancing deep into postseason play.

Of this $750 million, the NCAA reallocated $400 million of tournament revenue last year to cover these costs of non-revenue sports in Division 1, 2 and 3. Prof. McFall asks, what is the economic justice of subsidizing all other sports on the backs of NCAA Tournament players who generate this value?

Without any monetary compensation in college, huge NBA salaries look appealing. For many of college basketball’s best players, it is a no-brainer to leave before getting their degree.

"Certain players don’t have the tools to play right away professionally," Green said. "If they stay, they would get the benefits of college on and [off the court]."

Prof. McFall said, "The NCAA doesn't want to have to negotiate prices. But you can’t keep prices down forever. It’s like keeping down gravity."

As the college sports revolution rages onward, many questions remain unanswered. How would the NCAA compensate student-athletes in revenue sports? How would the payment of players affect the treacherous divide between large and small universities?

But the ultimate question is: As the dominoes keep falling, can the NCAA remain standing?

Full Disclosure: I am taking a course called "The Economics in Sports" with Professor McFall this semester.