The Wake Forest football schedule has officially been released. Find out when the Deacs will be at BB&T Field this fall!

Coach Dave Clawson's tenure at Wake Forest will begin with a trip to Louisiana to take on a Louisiana Monroe team which knocked off the Deacs at BB&T Field last season. The Deacs will make their home debut on September 6th when they face FCS opponent, Gardner-Webb. The following Saturday the Deacs will travel out west to take on a tough Utah State team, who went 9-5 last season. Each of the first three games is in a different time zone. Finally, the Deacs will conclude their non-conference schedule with a home game against Army on September 20th.

Wake Forest will not have the opportunity to ease into the ACC schedule as they begin with a trip to Louisville, who went 12-1 last season, and follow that up with a trip to Tallahassee to take on the defending national champion, Florida State Seminoles. Fortunately, following their October 4th game against Florida State, Wake Forest will not have leave the state of North Carolina. Overall, Wake's 11 FBS opponents went a combined 90-53 (.629) last season.

Credit to FB Schedules for helping us fill out the missing pieces to the puzzle.

Leave us a comment and tell us what you think about the schedule. 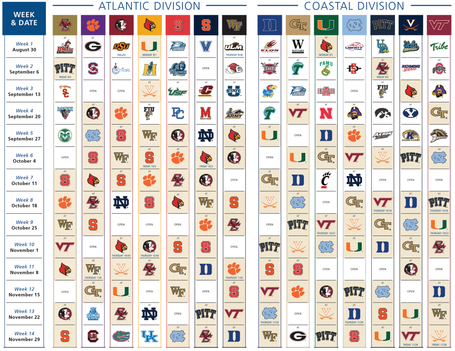