Faced with adversity last Saturday against Army, Wake Forest got back in the win column and now looks to upset #3 Clemson.

Share All sharing options for: Demon Deacons prepared for tough test at Clemson

The 2013 Wake Forest football season at times has resembled a vintage Mike Tyson fight. If the 24-10 loss at Boston College was staggering punch to the gut, the ugly 21-19 home defeat to ULM was a thundering right cross that sent the Old Gold and Black stumbling into its corner and seeing stars.

Faced with the possibility of another lost season, the Demon Deacons instead answered the bell, defeating the Army Black Knights 25-11 to level their record at 2-2 going into this week's game against the Clemson Tigers. During his weekly press conference, coach Jim Grobe was candid about the concerns for his team going to West Point after losing two straight games.

"I was concerned because there was so much pressure on our guys," Grobe said. "It wasn't a secret- we couldn't go to Death Valley 1-3."

Led by redshirt senior Nikita Whitlock, the Demon Deacon defense did what No. 5 Stanford could not: it kept the Army wishbone attack out of the end zone. The dominating defensive performance not only kept Army without a touchdown, but also held the Black Knights to more than 40 yards under their season average. 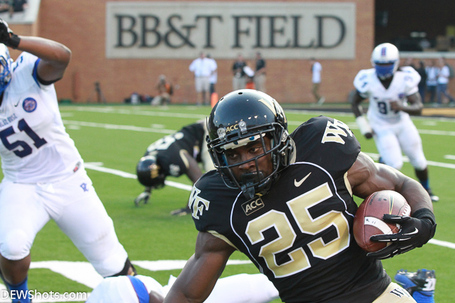 The much-maligned Wake Forest offense, taken to task publicly by their head coach following the uninspired loss to ULM, finally found its footing (and possibly its number-one running back) in the second half as redshirt senior Josh Harris and his offensive line bulldozed Army for 96 yards and two touchdowns to put the game out of reach.

Grobe gave Army credit for shutting down the Wake Forest offense after the Black Knights made a scheme adjustment that the Deacs' had not seen.

"They took the defensive ends and took them off our tackles and put them down on the guards, and that really gave us problems," Grobe said. "We hadn't really prepared, going in, for that."

After a first half spent spinning its wheels, the Demon Deacons slowly but surely began to assert itself at the point of attack, thanks to some quick thinking by offensive coordinator Steed Lobotzke and offensive line coach Jonathan Himebauch.

"We started out pretty good, and then they went to that look. I thought Lobo and Himey did a nice job; they made some adjustments with the O-Line and gave us some creases that really helped us."

Next up for the Demon Deacons is visit to Death Valley to play the third-ranked Tigers, whom they haven't beaten in four straight tries. In fact, the Deacs have not left Death Valley victorious since 1998. The Tigers are heavy favorites, and many observers feel that they are capable of making a run at the BCS National Championship.

Last year's meeting between the two was over quickly, as current Heisman candidate Tajh Boyd threw 5 first half touchdown passes to 5 different receivers en route to a 42-13 thrashing of the Deacons at BB&T Field.

The key in last year's meeting in Winston-Salem was Wake's inability to combat Clemson's blazing speed, paired with offensive coordinator Chad Morris' multi-faceted offensive attack. The song remains the same this year, as the Tigers have amassed 465 yards of total offense and found the end zone 13 times through 3 games.

This year, however, the Deacs are ranked 28th nationally in total defense (38th if you don't count Presbyterian), averaging 312 yards per game and snatching 11 takeaways so far.

Even if you throw out the Presbyterian game, the Demon Deacon defense matches up with Clemson better than one would imagine- at least on paper. Also, it's not like Clemson hasn't played a cupcake itself, dismantling hapless South Carolina State 52-13.

"But, but, they beat Georgia! On national television!"

Yes, the Tigers went and made the ACC proud, beating the Georgia Bulldogs in prime time 38-35. That would mean a lot more to this writer if Georgia had acquitted itself like a proper SEC East team should in the weeks following that upset. At one point last Saturday, Georgia was on "upset watch", tied with North Texas midway through the third quarter.

Do with that what you will. Numbers are strictly that- numbers. As the great prophet Rasheed Wallace says, "Ball don't lie."

The largest number I've seen in Vegas so far is 28, and after years of losing "Pick ‘Em" contests I've learned that Vegas might actually know what it's doing. Clemson is ranked third for a reason, and no matter their ranking in statistical categories, the only statistic that really matters is winning. 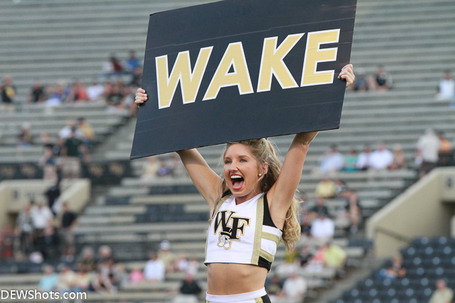 Last Thursday night against N.C. State, Dabo Swinney's charges played probably the most ragged, sloppy football I've seen from a Clemson team in quite some time. State fans are still screaming about the horrible officiating that, at the very least, cost the Wolfpack some momentum.

If the Tigers can give a decent ACC team like State a poor effort like that on national television and win, then Clemson is well on their way to a perfect season and a chance to play for big trophies. Grobe admitted that the Deacs are facing perhaps their greatest challenge thus far.

"This is probably the fifth different offense that we've faced, and none of them are really very comparable," Grobe said. "With Clemson, you not only have some of the best if not the best talent in the country to go against, but you have a team that can beat you running it and throwing it."

One of the keys to Saturday's game will be the ability of senior quarterback Tanner Price to keep getting the ball to flanker Michael Campanaro, who is 30 catches shy of Wake Forest's all-time receiving record. Campanaro said that he relishes the big-game atmosphere and the opportunity to play in hostile environments.

"I love playing on the road, especially at a place like Death Valley," he said. "It's an awesome place to play. I'm excited to go play there."

For his part, Campanaro believes that Wake Forest has the weapons to go down South and pull the rug out from under Clemson's season- even if nobody else is giving them much of a chance.

"If we go out there and put together a great game on offense, defense and special teams we think in the fourth quarter we'll be hanging around, right where we want to be," Campanaro said. "In-house we believe; no one is giving us a chance outside of our locker room. I think our team definitely believes we can go in there and pull this upset off."

A win on Saturday would equal in importance the 2006 30-0 victory over Florida State in Tallahassee. The Deacs would be 3-2 and 1-1 in conference, with their Atlantic division title hopes still intact. A loss, however, means the Deacs have to go .500 for the remainder of the season just to get bowl eligible.

If the Deacs leave Clemson with an "L", that leaves Syracuse, Duke and Vanderbilt as "must-wins"- leaving Deacon fans to hope that the Wolfpack's streak of futility in Winston-Salem continues. Or, the Deacs will have to pull an upset of either FSU, Miami or the surprising upstart Maryland Terrapins.

If all of this sounds difficult and confusing, perhaps it is best right now to take the approach Camp and Co. have adopted:

"We definitely know that we control our own destiny. Our goal is still to win the ACC Championship game so we're just taking it one game at a time."