Saturdays dismal defeat to ULM has the Deacons sitting at 1-2 with the meat of their schedule yet to play.

They trudged by in silence, faces streaked with sweat and devoid of expression, more closely resembling a mill at quitting time than a victorious football team.

The Warhawks from the University of Louisiana at Monroe had just dispatched the favored Wake Forest Demon Deacons 21-19 on a chamber of commerce afternoon in Winston-Salem, a brutal fiasco that in no way should have gotten that close.

ULM spent nearly 39 minutes on offense, a statistic that most likely felt much longer for the paltry amount of Demon Deacon fans in attendance. For their trouble, they saw ULM gunslinger Kolton Browning go 43-68 through the air, throwing 2 interceptions and 3 touchdowns along the way. 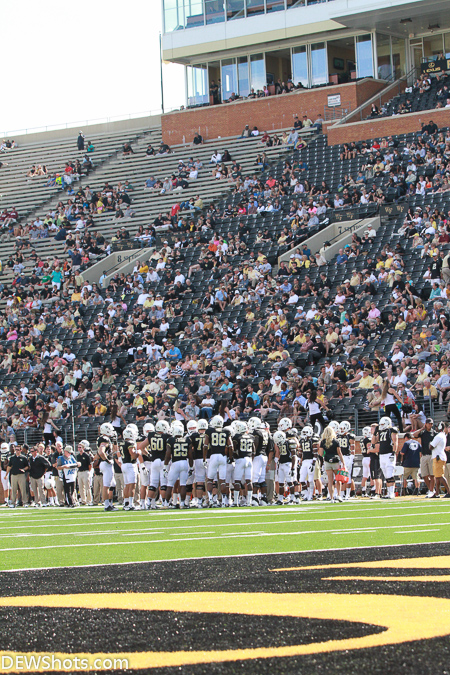 However, the Deacon defense, mistakes be damned, managed to largely defuse the ULM offensive juggernaut which gained fame last year after its upset of 8th -ranked Arkansas in Little Rock. Despite the copious amount of time and yardage generated by the ULM offense, they only managed 21 points.

Much like the previous week's debacle at Chestnut Hill, Wake Forest's offensive performance inspired little confidence within the fan base, evidenced by the few thousand fans remaining when the Deacons finally mounted an offensive charge.

For just a moment, when Tanner Price's beautiful touchdown pass settled into the waiting arms of Orville Reynolds, there was a surge of life within the walls of the former Groves Stadium. Just as quickly it vanished, falling to the ground with the two-point conversion attempt meant for Michael Campanaro. 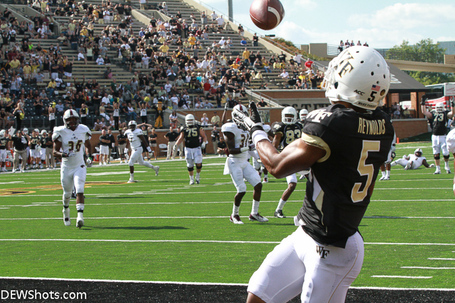 Of the 3 touchdowns generated in the last two weeks, all have been through the air. That in itself is not surprising, given the talent at wide receiver on Deacon Boulevard. However, even the most elite pass-heavy teams institute a capable running attack with which to keep opponents honest. With this in mind, the Deacon coaches spent most of the offseason implementing a system designed to restore a once-passable ground game.

Through three games, Wake Forest has rushed 108 times for 259 yards, 189 of which were gained in week one versus FCS Presbyterian College. Blue Hose aside, in two games against FBS opponents the Deacs have combined for 70 yards on 54 carries- 1.3 yards per carry.

That, by any definition, does not equate to winning football.

Worse yet, the product being foisted on the college football public is a curious case of football multiple-personality disorder. On one hand, the Demon Deacon defense is as advertised: a fast, fiery collection of like-minded athletes trying to create turnovers and be the biggest pests in the Atlantic Coast Conference. 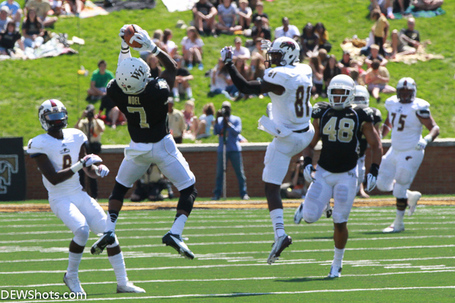 On the other, the Wake Forest offense at times resembles a disorganized jumble of moving parts, all moving in slow motion with no discernible end game. The latter is the hardest to understand, given the presence of senior leaders Campanaro and Price and the excitement shown by all during the preseason as Wake Forest worked to retool its running game.

Jim Grobe sat at the table in the media room, sullen-faced, as he took the blame for the events at BB&T Field on Saturday. He was, as he is wont to describe his senior quarterback, a "thumb-pointer" accountable for the failings of his football team.

"We have no sense of urgency," Grobe said. "This is my fault. This is nobody's fault but the head coach, when your offense plays like they're asleep at the wheel. The deal is, a dropped ball is no big deal, and a bad throw is no big deal. That's my fault. I've allowed that to happen. The way we're playing right now offensively and the lack of intensity, it doesn't matter what we're doing. We're just a very lethargic, sloppy offensive football team."

It was as angry and disappointed as I've seen Jim Grobe in the short time I've been able to interact with the man. I asked more veteran media members in attendance to assess the same, and they all agreed it was the worst mood they've ever seen worn by the veteran coach.

It was as if the detritus of the previous four seasons all washed ashore at the same time. The Wake Forest Way, for what it's worth, had thrust when it should have parried. There has, indeed, been a wrong turn at Albuquerque.

It's been said that one should never lose to a "directional" school (Northwest Arkansas State at Dubuque) or a school with a city in its name (a notion shot down with a bazooka by Charlie Strong and company at Louisville). Make no mistake, ULM is a talented football team that will make another run at a bowl game this season.

However, an ACC team returning 15 seniors and boasting All-ACC candidates (Whitlock and Campanaro) simply has to win that game. And they know it.

"I'm disappointed we lost," Whitlock said. "I believe this game was a must-win. We got some hard games. This was a game where they came to our house. I really believe that we were a better team honestly, but they played better. This is how it goes."

What is most puzzling is that one side of the football is playing with intensity while the other seemingly is mired in quicksand, displaying no sense of urgency despite seeing opportunity slowly slip away. Sitting high above the field, I could hear voices from different corners of the room calling plays in certain situations (correctly) before the play unfolded.

I agree with Grobe when he says of the passing game that, "Our kids are hearing the same calls they've been hearing for four years." I also agree that part of the problem is that some of the players being counted on like Jonathan Williams haven't been around for four years to hear it. So, I dismiss any notion that the offense as a whole is bored with the scheme.

In fact, these are the same pass calls, according to the coach, that Riley Skinner ran during the glory years of the Grobe era.

The gleam from the shine of the 2006 ACC Championship has faded over the past four seasons. If this Deacon team is to continue down the path of its recent predecessors, Jim Grobe will have tallied 5 straight losing seasons and sparked a level of vitriol amongst the fan base never seen before in the football program. That is what happens when you change expectations.

It was hoped by many that a talented, senior-laden football team would help distract what has become an increasingly vocal section of the fan base from the upcoming basketball season. Instead, there are now new faces ensconced in the proverbial hot seat.

This weekend the Demon Deacons travel to historic Michie Stadium in West Point, New York to face the Army Black Knights. The Deacs will once again be favored, but will be facing much more than a resilient Army team that put up close to 300 rushing yards on Stanford. They will be fighting to salvage their season, right their program and play the type of football that was promised before the season.

There is a wonderful monument on the campus of the United States Military Academy, displaying a quote attributed to General George C. Marshall:

"I want an officer for a secret and dangerous mission. I want a West Point football player."

To me, that message intones a desire for strong leadership when facing severe adversity. Wake Forest needs those same qualities in its football season. Too often in the past few years, the "WF" decals on the side of the Demon Deacons' helmets have stood for, "We Fold" instead of, "We Finish."

Jim Grobe is inarguably the most decorated football coach in Wake Forest's history. At one time, his innovation and determined focus helped change the little school in northwest North Carolina into the ACC Football Champions. This weekend in beautiful West Point, Wake Forest needs a man (and a team) unashamed to make the changes needed to salvage this football season.

For if the season is lost, Wake Forest finds itself once again in a football mess- as if 1995 never, ever left.