Tajh Boyd offers his opinion of the Wake Forest offense on Instagram. Hint: some of you share this opinion.

Share All sharing options for: Clemson QB Tajh Boyd has some suggestions for the Wake Forest offense

Wake Forest's Michael Campanaro recently took to Instagram to share a picture taken presumably right after his spectacular touchdown grab against Boston College. It's a great picture, indeed, that inspired a few comments- including a couple from Clemson quarterback and Heisman candidate Tajh Boyd. 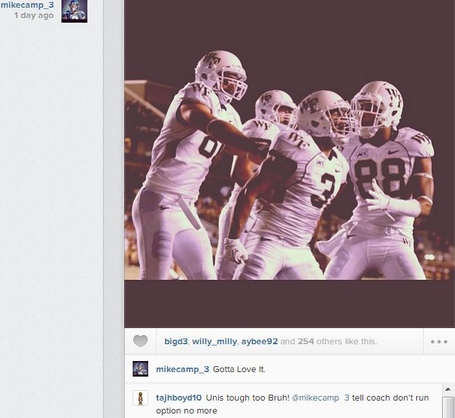 "Hah cause man it's not supposed to go down like that smh I watched and was like well damn(Gucci voice)."

At any rate, it's a fine picture and coach Jim Grobe himself lamented not taking advantage of opportunities in the passing game last Friday night. For the record, Campanaro snagged 5 passes for 86 yards and a touchdown against the Eagles, but quarterback Tanner Price was only 18-30 for 191 yards and an interception. If defenses are going to stack up against the run, Wake Forest is going to have to exploit those opportunities in order to be successful.