Wake Forest released the official schedule for the 2013-14 men's basketball season on Thursday. The Deacons begin the season at home November 8 against Colgate after a lone exhibition tilt against Brevard College. The Demon Deacons then play five straight home contests before heading to the Bahamas for the 2013 Battle 4 Atlantis tournament featuring Kansas, Tennessee and USC. Those games will be televised by the AXS and NBC Sports networks.

Following the Thanksgiving tournament, the Deacs  enjoy another four home games before a trip to Cincinnati to face Xavier in the annual Skip Prosser Classic.

Wake Forest begins its conference slate Sunday night January 5 on ESPNU, when the Deacons host rival North Carolina at 8:00 pm. From there, the Deacs travel to Virginia and Pittsburgh before hosting N.C. State in a prime-time affair on January 15. The Deacons then go on the road twice more before a three-game home stretch against Notre Dame, Syracuse and Georgia Tech.

Wake Forest will appear on the ESPN family of networks a total of four times this season. In addition to the opener against UNC, the Deacs will be showcased twice against Duke and once against N.C. State. Per the ACC website, all conference games carried on an ESPN, ACC or regional network will be available to users of ESPN3.

The conference tournament will be played March 12-16, 2014 in Greensboro. 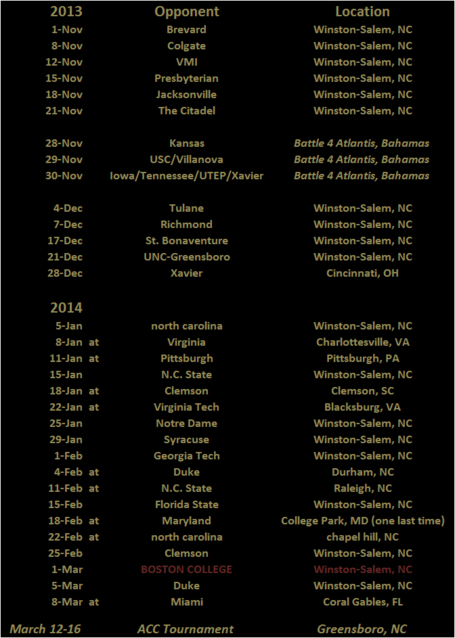