Much has been made of the reasons surrounding Wake Forest's disappointing 5-7 (3-5 ACC) 2012 campaign. Injuries, suspensions, internal discord- those are just some of the obstacles dropped in the Deacons' path last season. As the Deacons look to a better 2013, the above issues look to be resolved and attention is now squarely focused on player development and execution.

One area requiring a good deal of player development (in a hurry) is the Wake Forest linebacking corps. When asked at the ACC Kickoff about his team's depth, Grobe struck an ominous tone.

"My biggest concern is the linebacking position," Grobe said. "If you're a true freshman linebacker right now at Wake Forest, you either ought to be really excited or really nervous because there's a good chance you're going to end up on the field."

A struggling offense kept the Deacon defensive unit on the field for large chunks of last season. In the end, Wake Forest ranked 9th among ACC teams in total defense and 11th in scoring offense (giving up 32 points per game).

The Deacons return six linebackers in total but only two of them, redshirt seniors Justin Jackson and Mike Olson, were starters last season. Olson, a 6'3 inside linebacker, started 11 games last season, finishing second on the team in total tackles (78, 39 solo) and recording one interception against Boston College. Jackson, a 6'1 outside linebacker, started all 12 games in 2012 and was the team leader in tackles (81, 40 solo). Jackson and Olson also combined for 5 sacks on the year.

That leaves the Deacs in the midst of a youth movement if they want to help take some pressure of the talented Wake Forest secondary. Aside from Jackson, the only outside backer that has ever played a collegiate snap is Zach Allen. Allen played in all 12 games last season, starting 2. He finished the season with 42 tackles to his credit, 24 of them solo. Unfortunately for both Allen and the Deacs, he is academically ineligible and has yet to suit up this preseason as he waits for the NCAA to determine his fate.

The inside linebackers are the more veteran group, returning 3 redshirt sophomores along with Olson. Apex, North Carolina native Britt Cherry saw action in 6 games last season and tallied 1 tackle. However, Brandon Chubb played in all 12 games and recorded 22 tackles. One name that keeps popping up as a potential immediate contributor is Teddy Matthews, a 6-3 225-pound inside backer from West Palm Beach.

Despite the lack of experience at linebacker, Jackson was optimistic about the Demon Deacon defense as whole. 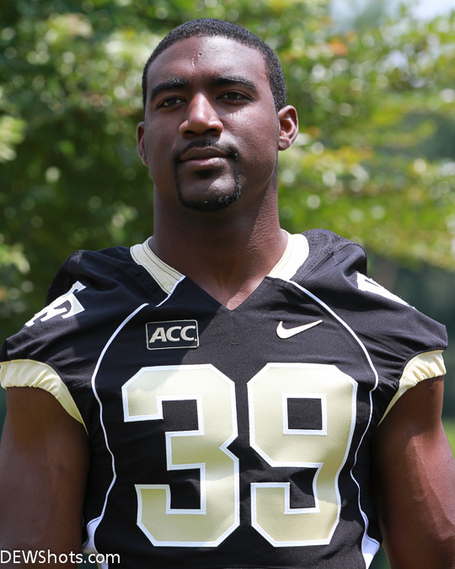 "As a group, I think we’re really going to be good, "Jackson said. "Our corners and safeties are really experienced and really good. We’ve got a good corner in Bud Noel and also KJ, Kevin Johnson. The DBs will be really good. The linebackers have me coming back, and we also have Mike Olson. We have a really good young guy, Brandon Chubb, who got some playing time last season and did really well."

It's depth crises like this one that helped Grobe decide to table the long-standing redshirt program in April. He quipped at ACC Kickoff that it was as simple as having players on the scout team that were better than what was on the field. They say that experience is the best teacher, and for the young Deacon linebackers class is now in session.

Football is here! Blogger So Dear at the 2013 ACC Kickoff