The Battle 4 Atlantis tournament bracket has been released and Wake Forest will square off against Andrew Wiggins and the Kansas Jayhawks in the first round of the Thanksgiving weekend tournament. 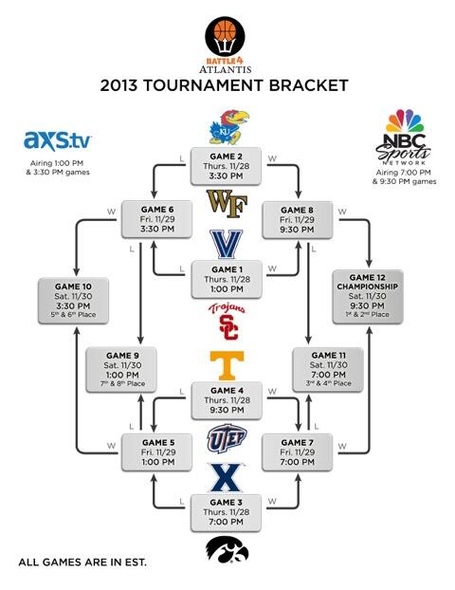 It had been rumored for a few weeks that Wake Forest would get the chance to see freshman phenom Andrew Wiggins up close and in person in the Bahamas on Thanksgiving day. Those rumors turned out to be true as the Deacs will square off against Kansas in the first round of the tournament.

No matter whether the Deacs win or lose the first round game it will then play a former Deacon (or two), as the other game in the pod features USC (J.T. Terrell & Ari Stewart) vs. Villanova (Tony Chennault). This Thanksgiving really should be about coming back together for Wake Forest at least.

The other side of the bracket features Tennessee vs. UTEP and Xavier vs. Iowa. It is a fairly strong field and unless if there is other reasoning aside from catering to UTEP and USC not playing each other (since they are already scheduled to play one another next season), Wake Forest is likely the #8 seed in the tournament, facing Kansas, the #1 seed.

Regardless of where the Deacs are ranked, it should be a good test early on to see how much maturity has occurred over the off-season. Hopefully Wake will get at least one win out of its travels to paradise and who knows, maybe the Deacs will even shock a fan or two while down there.