No offseason for coach Jen Hoover and Wake Forest basketball

It's been a busy summer already for Jen Hoover and the Wake Forest women's basketball team. The second-year coach of the Deacs was kind enough to check in with BSD in-between events on her busy schedule.

Share All sharing options for: No offseason for coach Jen Hoover and Wake Forest basketball

Wake Forest's women's basketball team last played a game on March 8, losing an overtime thriller to Maryland in what could be considered the best game of the ACC tournament. In the interview room after the game, I asked rising senior guard Chelsea Douglas when "next season" would begin. Her response?

Consider that answer a major victory for Jen Hoover, who is entering her second season at the helm of the Deacons' women's program. If nothing else, Hoover and her staff constantly preach to their charges the importance of getting better every day and not resting on one's laurels. That's one reason why this offseason has been anything but "off" for the Deacon women.

The first order of business came in early April, when assistant coach Jaida Williams accepted the head coaching job at Coastal Carolina. Williams is an excellent coach and recruiter, but even with the July evaluation period looming, Hoover didn't find reason to rush into a hire.

"The thing that is always amazing me about our staff is that I can take something to somebody and all five of them will say, 'I'll go do it,'" Hoover said. "That's a testament to what we've been able to put together. When we lost Jaida, it was kind of like, 'How do we complement stuff we've already got going, because we work so well together (as a staff) already.' It was just a matter of time to find that right fit."

The right fit came in the form of new coach Clarisse Garcia, who comes to Wake Forest after one season on the bench at Alabama. Prior to her stint in Tuscaloosa, Garcia was head coach at Division II school Palm Beach Atlantic, where she helped turned around a team that had suffered through a six-win season just prior to her arrival.

"I'm really excited to have her," Hoover said. 'She brings a lot of great experience from being a head coach and assistant coach. I think she'll be working a lot with our post players. She's passionate, energetic and it's all about the players. She's hit the ground running."

Most important, she hit the ground running before the freshmen made it to campus after the July 4 holiday. July is a key recruiting month, and time is precious when the staff is out traveling during the evaluation period. The first week or so seems to have gone smoothly by all accounts for the new Deacs, and now that the first evaluation period is over, Wake Forest will get to take advantage of new NCAA rules that afford them more practice time. 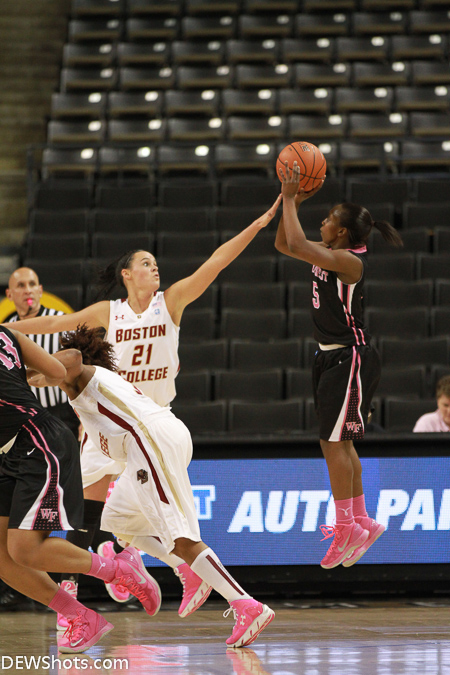 "We get eight weeks where we can work with them through the regular offseason workout period," Hoover said. "Two hours of basketball skill work and the other six with a strength and conditioning coach. The way it works is they have to be in summer school or they have to meet an academic standard. So now Chelsea (Douglas) can work out even though she's not in class."

BSD spotted Douglas and her teammates at the Triad Pro-Am this past Thursday night, and they look like they're ready to get started on the new season. Keep checking back with Blogger So Dear as we gear up for a new season and, in the process, introduce you to the newest members of the women's basketball program!