This week's collection of links from around the web about Wake Forest athletics.

It may be the offseason on Deacon Boulevard, but there is plenty of Wake Forest news making the rounds on the Internet. Here's a look at what's been going on this week in Tie-Dye Nation: 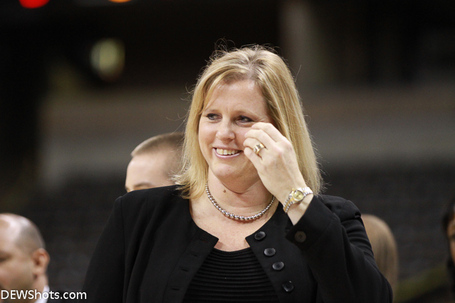 Wake Forest head women's basketball coach Jen Hoover spent the week in New York City as one of the 30 participants in the WBCA's Center for Coaching Excellence. This is a top-flight leadership program that is invitation-only.

Speaking of the women's basketball program, the ladies were one of five Wake Forest teams recognized this week for their showing in the APR. Not the most shocking revelation in the world if you know this group even a little.

The Winston-Salem Journal's Dan Collins had a chance to chat with Jeff Bzdelik this week about the basketball team's inclusion in this year's Battle 4 Atlantis, featuring (among others) Kansas, USC and Tennessee.

Finally, you may have heard that former Deacon Tim Duncan is once again in the NBA Finals, this time against LeBron James and the Miami Heat. Thursday night, the Spurs LeBeat the Heat to take Game 1.

The Week in Wake