In the Fall of 2004, a freshman class of football players matriculated at Dear Old Wake Forest, determined to change the perception of the Wake Forest program forever. September 9, 2006 marked the first public display of the strong influence of the Fresh Deacs.

Share All sharing options for: The rise of the most successful class in Wake Forest football history

What had begun with hopeful uncertainty seven days before had devolved into a feeling of impending doom for most of the 26,071 fans in attendance at the former Groves Stadium. The Deacons, coming off three straight losing seasons under coach Jim Grobe, were staring at a loss to Duke during the second game of the season. For most teams, losing the second game of the season is not a devastating occurrence. When it comes at the hands of a team circled on your schedule as a "must win" on the road to bowl eligibility, it becomes a lot more serious.

Just one minute, 22 seconds earlier, the world was on its correct axis, as junior running back Micah Andrews barreled into the end zone from two yards out, tying the game at 13 apiece. Sam Swank then split the uprights for the extra point, and there was joy again in Winston-Salem. Duke had a freshman quarterback (Thaddeus Lewis) and 1:28 to pull out a victory. 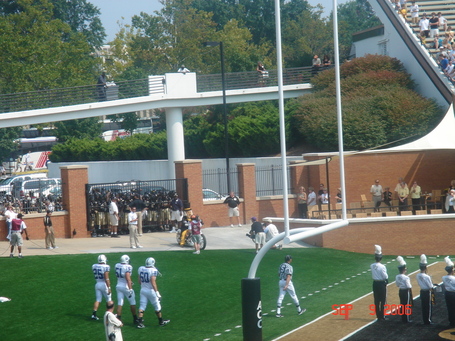 Two pass interference penalties and a complete implosion of the pass defense later, Ted Roof's squad found themselves in business on the Deacon 9-yard line, allowing just enough time for Lewis to position the ball in the middle of the field at the Wake 11. There were six seconds to play. Sophomore kicker Joe Surgan came on to the field to win the game for the Blue Devils.

I was in attendance that day in 2006 along with my two best friends, one of whom has a photographic memory (and a penchant for cynicism). I sent a message asking for what he was thinking during those final six seconds. This is what I got back:

"I can't believe we're going to lose to Duke!"

"How is it possible we're being out-schemed by Ted Roof?!"

"What were the paperbacks that the two Duke fans were reading while we were tailgating next to them?" 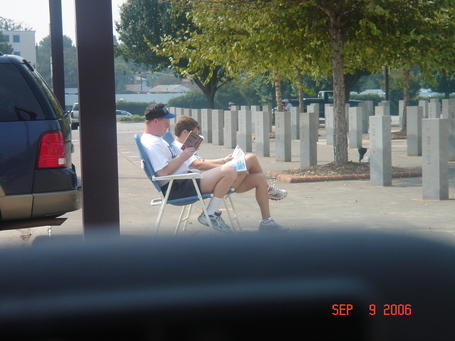 And finally: Who is Chip Vaughn?"

We know Chip Vaughn now as an ACC and Super Bowl Champion, and more recently a member of the CFL's Saskatchewan Roughriders as he seeks another opportunity in the NFL. But on September 9, 2006, Vaughn was just a college football player in a lot of pain.

"What a lot of people don't know is the week of the Syracuse game, there was a staph infection going around the entire team," Vaughn said. "I think about 8 guys got staph. I didn't think I would be able to play the (Duke) game. The night before the game, I didn't get an ounce of sleep. It even hurt to put just a thin sheet on top of it. Prior to that game I think I got four bags of IV (fluid). I had it, Micah Andrews had it, De'Angelo Bryant all had it. There were so many question marks around the whole team."

Question marks were the last thing this Wake Forest team needed. Just one week earlier against Syracuse, starting quarterback Ben Mauk suffered a gruesome shoulder injury while pouncing on a fumbled ball. The injury ended Mauk's season (and career at Wake Forest), and thrust redshirt freshman Riley Skinner in the starting role. The offense had to be hurriedly amended, among other things, and the last thing the coaches needed was something like a rash of sickness.

"I had forgotten about that," Skinner said. "That was a big deal. There were guys that were hooked up to IVs, getting those things drained; just nasty all over the place. They had to come in and completely sanitize the locker room. I remember Steve Vallos had it pretty bad. There were about six starters that all got it."

Things went from bad to worse when starting safety Josh Gattis went down in the first half with an injury. Vaughn, now a redshirt sophomore reserve, was suddenly the number one guy in a hotly contested conference game.

"Me, Patrick Ghee and Josh (Gattis) all rotated. Josh got hurt at the start of the second quarter so I had to come in and play safety and all special teams with two staph infections. I was out there hurting, but at the same time I was hyped because this was the first time I'd had to show what I had."

And so it came to be that Vaughn found himself on the field during that pivotal 1:28 of football at Groves Stadium. For Vaughn, his introduction to the spotlight didn't begin well.

"That last drive, we had two or three pass interference calls," he said. "I had one, Kevin Patterson had one, and I think that was back-to-back. Then we missed a tackle and the dude gets down to the nine-yard line."

What happened next would set the tone for the 2006 season, but the reason why it happened can be traced to 2004.

Jim Grobe arrived on campus in 2001, tasked with building a football program that would be competitive on the field without sacrificing the school's academic reputation. Prior to Grobe's tenure, the Deacons had appeared in only five bowl games in its history. The Deacs parlayed a 6-6 record in 2002 into a Seattle Bowl bid, beating the Oregon Ducks 31-17, but by 2004 the program was still essentially playing .500 football. Deacon fans wondered if they would ever see a consistently competitive program on the gridiron.

That year also marked the arrival of yet another crop of Deacon hopefuls. Nicknamed the "Fresh Deacs," that freshman group came to Wake Forest without a lot of fanfare (as usual) but with a Florida swagger. Then, as now, Wake Forest was mining Florida for the best possible talent. Most of the freshman class (including Vaughn) would redshirt, which meant they had plenty of time to absorb their new surroundings on campus. They weren't exactly excited.

"At the time at Wake, it was all about Chris Paul and Justin Gray, a basketball school," Vaughn said. "The football team was kind of like the black eye...everybody else was doing good but us. We couldn't even walk around campus with our heads held high. We were like, ‘We've got to do something. We've got to change this whole mentality.'"

As freshman, they were supposed to work hard and get acclimated to college life by following the lead of their more senior peers. They decided to do something else. They would lift weights, then lift some more. They would lift extra weights, run extra sprints and go hard every day...and they weren't quiet about it.

"All of us came from very good high school high school programs. Everybody was accustomed to winning. We were always taught to practice how we play. So we practiced like every day was Saturday. That was just the mindset we had. The upperclassmen, those guys couldn't stand us at all."

The intensity of their work ethic only grew once they were eligible to play in 2005. However, that team struggled in the newly formed Atlantic Division, stumbling to a 4-7 record. Going into 2006 offseason, it was time for the Fresh Deacs to assert themselves both on the field and in the locker room.

"They went very hard in practice," Skinner said. "There was a confidence level that had a little touch of cockiness, but enough to where everybody respected what they were doing. Some of the older guys didn't like it as much, just because they felt like you have to earn your stripes before you can open your mouth and do some of the things they were doing on the practice field. Whether it was going full contact when it was just shoulder pads and shorts, or getting in the face of upperclassmen that maybe weren't giving 100% and taking the game as seriously as they should. I was a younger guy as well, so I would listen to everything they were saying."

"When they started playing the way they did, it was pretty clear that they backed whatever they were saying. It sparked the team in a sense that we believed in what we could do and we believed the ceiling was higher than some people might've thought for our team. It really was that core group of guys that started that whole mentality and level of confidence that we played with."

The whistle blew to end the time out, and Fresh Deacs and their teammates found themselves staring down the barrel of a 28-yard field goal attempt and a loss to Duke with six seconds remaining on September 9, 2006. At the time, they had no idea that almost four months later they would be playing in the Orange Bowl, representing the ACC as its Champion. They didn't know that along the way they would blow out Mississippi and Florida State (!) on the road. All they knew was that they were in serious trouble.

Vaughn, having played most every snap at safety and participating on special teams was on the field goal block unit. During the Blue Devil time out, Vaughn and his teammates huddled to receive their instructions from coach Ray McCartney.

The ball was snapped, and Vaughn exploded across the line towards Surgan. Angling his body, Vaugn leaped into the air with with outstretched arms, and the football made impact with his right elbow. The ball bounced harmlessly back to the Wake Forest 30-yard line as time expired, setting off a wild celebration on the Groves Stadium turf. 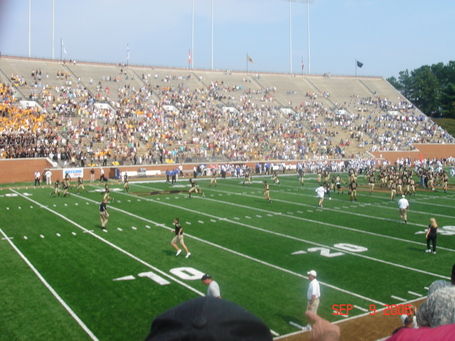 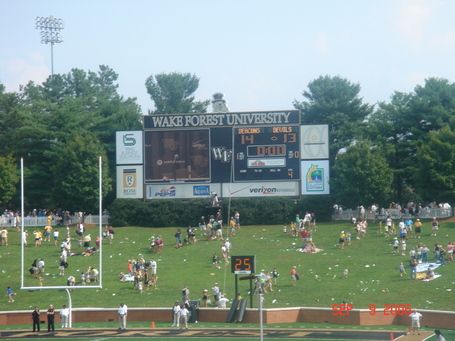 The Demon Deacons were now 2-0 heading into a date at Connecticut, not bad considering the obvious problems created by the injury to Mauk and Skinner's steep learning curve. A loss to Duke at home, no matter the personnel, might have deflated a team that had worked all offseason at becoming a tighter, more selfless unit. Instead, the locker room was a boisterous, jubilant den of young men who felt like world-beaters.

"Oh, man, it was nuts. It was crazy, man. Everybody was cheering. It was like, if we played a full 60 minutes, we felt like nobody in the entire country could beat us. We felt like the only way we could lose is if we beat ourselves. That's it."

This is the first in a series profiling the redshirt class of 2009.