Long-rumored plans to follow-up March's "FireBz" newspaper ads came to fruition on Saturday, as a billboard expressing fan and alumni displeasure was erected on NC Highway 52.

Plans to erect a billboard expressing displeasure with both Wake Forest AD Ron Wellman and head basketball coach Jeff Bzdelik finally came to fruition on Saturday after a week of message board speculation about its actual existence. The easily visible black and gold message is located on a high-traffic stretch of NC Highway 52, between two exits for BB&T Field and Lawrence Joel Coliseum. 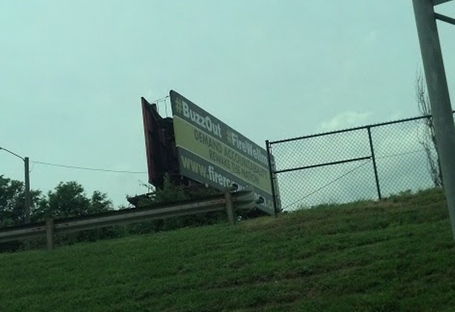 The content of the billboard (shown below) depicts two hashtags now familiar to Deacon fans in social media, as well as a web address for a new website similar in design to FireBz.com. According to the group-funding website Crowdtilt.com (a website co-founded by Wake alum James Beshara), over $4,500 was raised to fund the billboard.

"This board cost about $2000," said campaign administrator (and Wake alum) Nate Ferria. "That specific amount (not the full $4500 that we raised) was raised in literally two and a half hours. Forty-seven people contributed in total before we closed contributions because we had reached goal. We have enough to go through with a second board in the fall, which is currently the plan."

The "BuzzOut" movement began as a faint rumble on message boards long before this past basketball season, but grew to a mighty roar in March when the proprietors of FireBz.com placed ads in the Greensboro News and Record calling for a change in the men's basketball program. Ferria states on the Crowdtilt project page that fans raised upwards of $2,500 in two days towards the purchase of the newspaper ads.

Following the NCAA Tournament, Wellman publicly reaffirmed the University's support of Bzdelik, angering an already simmering portion of the fan base by alluding to "multiple years" remaining on Bzdelik's contract. Now, it seems the focus of this disgruntled section of the base is now firmly on Wellman, who has never wavered in his messageto fans regarding his trust in Bzdelik and the job he was hired to do.

"When the unanimous media reaction to your yearly interview is, 'What is he doing, and why won't he stop doing it?,'something is very, very wrong," Ferria said. "My favorite quote to come out of all of this was from CBS' Gary Parrish, who equated Wellman to a gambler who doesn't know when to get up and call it a night. The man has angered a deeply passionate fanbase, and any implication that we are a minority can be quickly shot down by even just a cursory glance at public polls on the subject."

It is not unusual for college athletic programs to use billboards, among other media, to promote their teams while taking playful jabs at rivals. Just last Fall, N.C. State began its "This is Our State" campaign, strategically placing billboards in various areas of the state, including the Research Triangle. In addition, Texas A&M wasted little time last year in poking fun at rivals University of Texas, declaring via billboard that Texas was, indeed, "SEC Country."

However, fan-funded billboards expressing this level of discontent are more the exception than the rule, and one might wonder if an approach like this could do further damage to the LOWF (Little Ol' Wake Forest) image which fans and alumni alike despise. Ben Swain, ACC writer and host of The Walk-Ons podcast, understood the sentiment in the billboard's message but expressed concern for the approach in an e-mail to Blogger So Dear.

"Whenever you make a public statement like that, the outside world is never going to know what steps were taken prior," Swain said. "AD's are customer service guys first and foremost, which means they'll respond to emails and phone calls from boosters and fans more often than not. That makes it seem like Wake fans skipped that step entirely and went straight to the billboard which means one of two things … the fans are crazy, or this particular voice is the minority."

It remains to be seen if the Wake Forest administration will have any comment on this latest protest action, or if they will remain silent while this group of fans and alumni exercise their right to free speech. In any event, this billboard (and the newspaper ads) are an unwelcome black mark for a national institution trying to move forward with a new capital campaign.

In the meantime, the billboard will be visible for at least the next four weeks. However, there is already a new Crowdtilt project page up, for the express purpose of keeping the billboard up through the month of June. At time of this posting, the group had already raised half of the funds required to keep the billboard up for another month.

Blogger So Dear will continue to monitor the situation as it unfolds.