Former Deacon CB Okoro remains confident he will find a home in the NFL.

As the football world excitedly waits for the NFL Draft to commence on Thursday night, former Wake Forest defensive back Chibuikem Okoro tries to ignore the noise while remaining confident that years of hard work will reap its just rewards.

"I work really hard," Okoro said. "I feel like hard work pays. I always quote from the Bible and it says a lazy person doesn't eat. A hard worker will eat. I always pride myself on working hard and that's what my family is all about: working hard."

Okoro is listed at 6'1, 190 lbs and plays cornerback. He is also a return specialist, having run back 6 kickoffs for 124 yards during the 2012 season. During a dismal 2012 for Wake Forest, Okoro still managed to pick off two passes and recovered one fumble (for a touchdown). 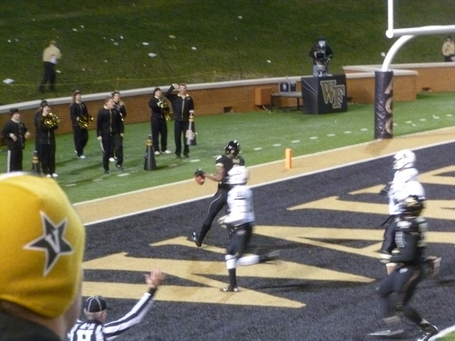 The week of the NFL Draft is full of predictions and projections for the many hopefuls trying to make the league. Okoro doesn't get caught up in the hype, opting to control what he can control.

Okoro said that the process of choosing an agent meant that he had to politely tell potential suitors that he really didn't care about draft status or predictions about his ability. He chose to train from January through March with a number of high-level prospects in Boca Raton, Florida in preparation for this week.

"I was lucky enough to train with a lot of big-time guys in Boca, and I'm sure I'll see them go pretty early and I'll be excited for them," he said. "Knowing that I could go late or I could go as a free agent doesn't bother me at all. I just know that once I'm in camp, the difference between the first round and the seventh round doesn't mean anything. The guy that wants it the most will play. I set my goals and I go for them, and I don't look back."