Another night of games gone means some more bracket shuffling as we get closer to Selection Sunday.

Villanova and Iowa State both picked up big home victories over ranked opponents in Georgetown and Oklahoma State respectively that should make both fan bases feel better about their chances to make the NCAA Tournament. Meanwhile, California suffered a loss at home to Stanford, which isn't a horrible loss, but also isn't what the doctor order for Mike Montgomery's squad. I still have the Golden Bears in the tournament but there is little room for error the rest of the way if they don't want to sweat it out next Sunday.

I've continued to adjust teams based on their wins and losses to get our predicted bracket from 3/5/13 updated with the current landscape. The initial bracket that we put out is still one that we feel will be close on Selection Sunday, but we also want to keep our Bracketology relevant as teams win and lose.

It was a pretty crazy night so there were a fair amount of changes.

Michigan and Michigan State moved into #2 seeds after Georgetown and Miami lost to Nova and Georgia Tech respectively. Minnesota dropped a couple of lines after a bad loss at Nebraska. Some teams lost but weren't penalized as much as well.

With a loss to UNC in College Park, Maryland falls out of my consideration for the tournament at this juncture. Tennessee also got by Auburn in a game that would have ruined their chances as well.

I had a bit of trouble setting the bracket up today because I have three Big Ten teams as two-seeds, which wreaks havoc in evenly distributing teams from conferences across the four regions. Other notable problems that I kept running into were that Butler has played Indiana and Memphis has played Louisville this year. That made me move a couple of teams from their respective seeds on my S-Curve to a seed higher/lower than they would have originally been.

Finally, thanks to Chris Dobbertean at Blogging the Bracket for stopping by and dropping a comment about yesterday's Bracketology. He informed me, and rightfully so, that Texas Southern cannot play in the NCAA Tournament this year because of APR sanctions from the NCAA. That moves Southern into the auto-bid for the SWAC. Not a huge change, but one that I was incorrect on before today. 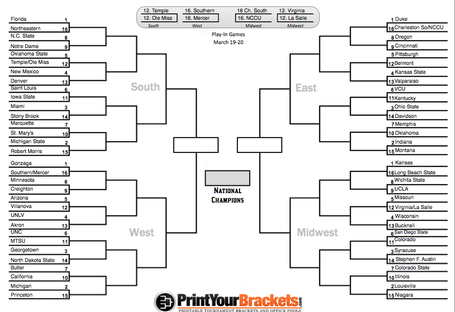 I'll be back with KenPom's bracket tomorrow, so for those of you waiting this long to get to that part, I sincerely apologize.

Note: As I stated earlier, I had to make a lot of changes to the bracket after I had my S-Curve for the night, so if you see any first or second round matchups that I somehow overlooked that cannot be played for whatever reason, please let me know and I'll adjust it ASAP.