Coaches in Thursday's 6 versus 10 match-up agree that Wake Forest is a threat in the 2013 ACC Women's Basketball Tournament.

Wake Forest approaches Thursday evening's first-round match-up with sixth-seeded Georgia Tech still stinging from a resounding 82-64 home defeat at the hands of the Jackets two weeks ago. The Deacons got off to a good start that night but fell victim to a 15-0 run keyed by the play of Tech guard and perennial Deacon-killer Tyaunna Marshall. Marshall would finish the game with 27 points while backcourt-mate Sydney Wallace added 20 to finish off the Lady Deacons. 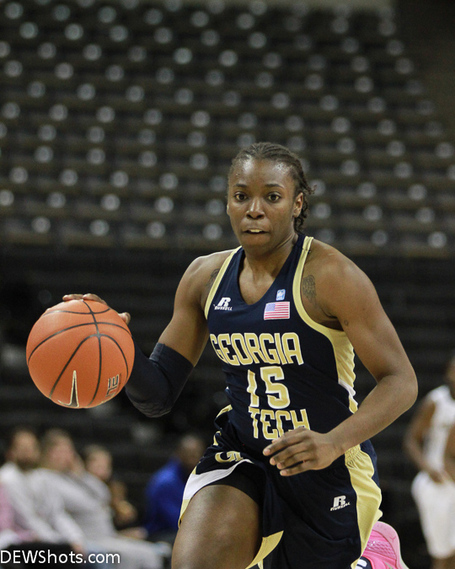 The Deacons hope that Thursday's effort more closely resembles the January 31 meeting between the two schools. In that game, the Deacs had five players in double figures while sophomore Dearica Hamby grabbed 12 rebounds before the Deacs lost by 7 in overtime, 89-82. If the comments from Georgia Tech's MaChelle Joeseph during Tuesday's ACC conference call is any indication, Hamby is going to be a major factor in Thursday's match-up.

"I definitely think Dearica Hamby is the difference-maker for them," Joseph said. "Her athleticism and the way she plays causes match-up problems. Wake is a very dangerous team, there's no doubt about it. Wake has one of the best backcourts in the ACC, and at the same time they have an inside game with (Sandra) Garcia and Hamby."

Hover agreed with her counterpart's assessment, but stressed that a victory will be contingent on an all-around team effort.

"I think we are dangerous in a lot of ways," Hoover said. "When our five are playing off of each other, we can be really dangerous. The key thing for us will be rebounding and taking care of the ball during the tournament."

It would also help, one guesses, if the Deacs could finally find a way to stop Marshall, who seems to relish playing the Deacons. Of course, nobody else in the league can figure it out, either. Marshall finished the ACC regular season with double-doubles in her last four games. Combine that production with the scoring of Wallace and forward Roddreka Rogers, and Georgia Tech is every bit as dangerous as the Deacs.

Tip-off is set for 6:00 p.m. from the Greensboro Coliseum and will be televised on RSN.