Today we whipped up an S-Curve to base wins/losses off of, while maintaining the projection idea of the entire bracket. That caused the bracket to move around a lot, but most teams remained at the same seeding as they were before. It's also interesting to work on it to get an idea of how far in-depth you have to get with prior matchups, conference matchups, and geography before you finalize it.

After the first crack at it last night and messing around with the bracket and the seedings a little more I finally established an S-Curve that will make it easy for me to move teams around when they lose or other teams around them win.

That means there are a fair amount of changes to the bracket today from yesterday's initial release. A lot of the seedings are the same because they are still projections for where teams will fall on Selection Sunday, but with more games played it narrows down where teams are headed a little bit better than we had yesterday afternoon. 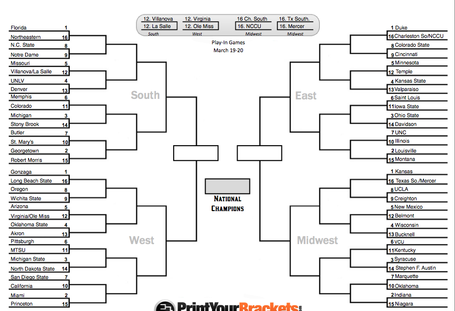 As we predicted, Boise State lost to UNLV, and since they were right on the bubble they are currently on the outside looking in. They do have plenty of chances to get the big win they need coming up, as they face off against New Mexico, and then have the Mountain West Conference Tournament (currently the third best conference in America according to KP).

Iowa did a lot for themselves with a win against Illinois, and now find themselves as the first team out of our bracket. Ken Pom has them at 31st overall, but the Bracket Matrix voters disagree, with only 2 of the 97 voters putting them in the tournament right now. If they beat Nebraska (as they should), and steal a win in the Big Ten Tournament against a top 4 seed, they will sneak into the Big Dance. We are higher on Iowa than most, but believe they can make it in with a couple of good wins.

Southern Miss is all but eliminated with their loss to Marshall last night (200+ in KP), but can still steal a spot if they beat Memphis in the conference tournament. 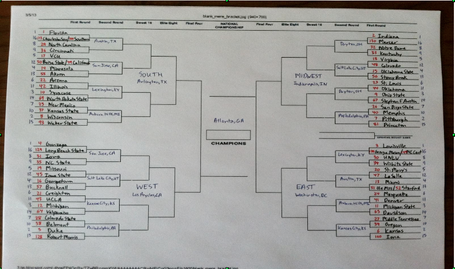 For KP it was a lot of procedural stuff since he obviously has his S-Curve formula well set for the Tournament (and the rest of the year too). His was a much easier to fix than the essential overhaul that we had to make with ours.

Any oversights or questions are always welcome and I'll do my best to explain why we slotted teams where we did. Enjoy it guys!