For those of you that may not know, "Bracketology" is the study of brackets, and in this case it specifically means the studying of the teams that will fill the brackets in two weeks. Today marked the first time this year that I took the time (and it does take some time) to sit down, list out the teams, and attempt to take a somewhat educated guess at which teams will be in and out by this time on the 17th of March.

First of all let me explain how Stonz and I went about compiling the teams that we put into this first edition of BSD Bracketology.

Using a variety of websites and excel tables to insure that we did not leave any team out, thus ruining our entire project before we got started, we put teams into 5 categories: Auto-Bids, Non-Auto Locks, Near-Locks, Solidly In, and Potential Teams. The Potential Teams were later split into Bubble In and Bubble Out, adequately named for what they mean in terms of making the Big Dance.

I'm not going to list out the teams that we put into each category because I am sure that would spark off a pretty big debate, but we tried to limit the "Non-Auto Locks" to teams that are 100% going to make the tournament, even if they lost out until next Sunday. Obviously the "Auto-Bids" include 31 teams (31 conferences that have a champion), and what we did here was attempt to predict the team that was most likely to win their conference tournament, even if they are not in first place right now.

Here is how these categories broke down numbers wise:

Basically the entire bracket that we put together, especially this first edition, was to try to predict where teams will wind up on Selection Sunday. As we get closer to the 17th we will be updating either every day, or every other day, depending on how much time we have each day to put it together. It should be pretty interesting to come back to this in a week and a half and see how successful we were in predicting it from right now.

This year we will also be doing something a little differently. Thanks to a contributor to BSD, we will have a Ken Pomeroy bracket compiled each day to compare our own homemade brackets to for a nice side-by-side look at different ways the bracket could be made.

As a reader you will likely not agree with all of our seedings, especially since ours are meant to be predictive in nature and figure out what teams will land where instead of where teams would be if the season ended today. That may cause a few teams to jump off the page at you in our bracket.

First of all, let's roll out our seedings in the order we expect (68 teams total with the expanded tournament format): 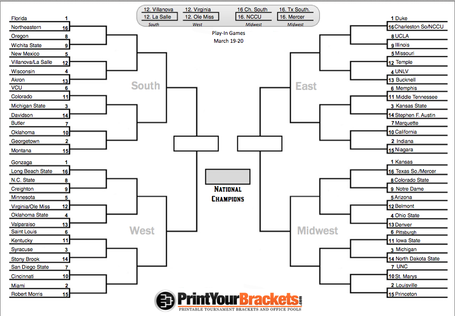 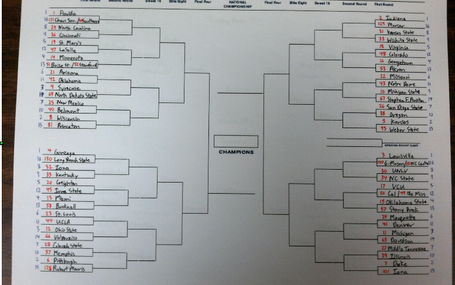 As you can see, there are several differences between our initial bracket and the bracket by Ken Pomeroy. Most notably, Butler would be left out of the tournament, as they sit at 60th in his ratings.

Note: Since I finished this after the 7 PM games tonight I was able to go ahead and get a head start on how some of the Bracketology will change after tonight. Southern Miss essentially played themselves out of the Tournament with a loss @Marshall while Ole Miss stands to jump into the Big Dance with a win over Alabama. We had Boise State projected to lose tonight, but if they win then they will be in the Tournament as well. Ohio State is going to knock off IU, but I figure that will work itself out to finish up around where we have each of them anyway.

If you notice anything out of wack or anything that you have questions about then shoot us something in the comment sections. I'm sure because of the bulk of data involved we overlooked at least a few things that need to be fixed.