The #BuzzOut movement had an ad in the Wake Forest student paper, the Old Gold and Black, last week and has shifted its aim of getting Jeff Bzdelik fired from Wake Forest to the Greensboro News & Record on the day of the first round of the ACC Tournament.

Following up last week's ad in the Old Gold and Black, Wake's student newspaper, a group of more than 100 Wake Forest fans and alumni raised over $2400 to place ads in the Greensboro News & Record during the first round of the ACC Tournament. 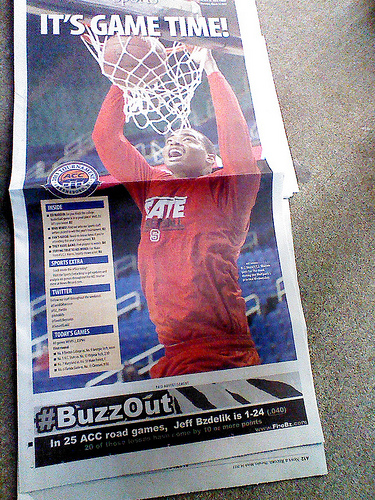 The ad, apparently spearheaded by the site FireBz.com, is on the front page of the sports section and has two quick stats about Bzdelik's road woes, as well as a hashtag and a URL. The site was started earlier in the season by a Wake fan and has reached well over a million page views in its brief existence.

This comes on the heels of a season where Wake, despite wins over N.C. State, Virginia and Miami, finished as the 10 seed in the ACC Tournament and ended the year losing 9 of its last 12 games. A highly touted freshman class was largely up and down, but Devin Thomas made the Freshman All-ACC team, Arnaud Adala Moto gave the team solid minutes and Madison Jones played his way into a starting role.

Bzdelik had been quoted in interviews before the season stating it was essentially a winning season or bust, with an NIT bid as the goal. Wake Forest will finish the year with a losing record for the third straight year. The site, as well as some of the other concerned fans, believe the players (and the program as a whole) deserve better and have urged athletic director Ron Wellman to part ways with Bzdelik.