The 2013 ACC Tournament in Greensboro, NC will be the 60th edition and will be the last featuring 12 teams. Although many would characterize the ACC as being in a down year, I have no doubt the tournament will provide many of the fireworks and sparks that fans are used to. BSD breaks it down.

Before I start the actually preview and "analysis", you should go sign-up for SCACCHoops.com ACC Tournament Pick'em.

Now, let's take a look at the bracket for this year's ACC Tournament, along with the television information: 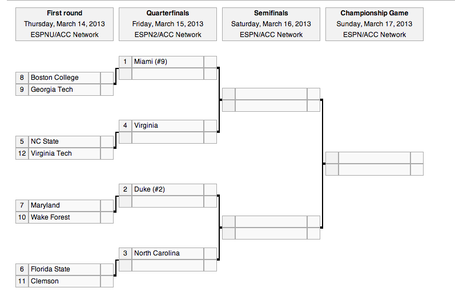 The Thursday games may not be extremely exciting, but as Wake fans we have our game to look forward to at 7. There are also 7 total teams that must win four games in four days if they want to make it to the Big Dance. I think it's safe to assume that N.C. State is in the tournament right now, but they may not want to lose to the Hokies in the 5v12 game to make things complicated.

Also, here are the Log5 results from KenPom.com for the ACC Tournament (spoiler alert: Wake has virtually no chance):

BC and GT kick off the ACC Tournament at high noon in a rematch of last Saturday's 74-72 Eagles win that clinched the 8 seed. Despite winning that game, KenPom still has Georgia Tech as a 56% favorite to move onto Friday (65-63).

Boston College had a very balanced attack in that game with 4 scorers in double figures and another one at 9 points. Defense was optional in that game and it took 18 points in the last five minutes by the Eagles (17% chance to win with 5 minutes left in the game, down 62-56) to get the W on Senior Day in Chestnut Hill.

I disagree with KP that Georgia Tech will take this game and actually like the Eagles to move onto Friday. Head coach Steve Donahue of Boston College has his team rolling at the right time with three straight wins to end the regular season.

Whichever one of these teams wins could possibly give Miami a run for their money. Georgia Tech beat them in Corral Gables last week, and Boston College lost to them in Chestnut Hill by just one point back in January.

This game is interesting for a couple of reasons. N.C. State needs to win to guarantee themselves a spot in the NCAA Tournament, and I want to see how many points Erick Green can score. He dropped 35 points against Wake on Sunday and State's defense is worse than ours.

KenPom has N.C. State as an 84% favorite to advance (74-61). A lot of it depends on which N.C. State team shows up though. Will it be the one that beat Duke and hammered UNC? Or the team that lost to Wake Forest and FSU on the road?

I'm guessing Coach Gottfried will have the team ready to go, at least for tomorrow, and the Pack will put this one away early in the second half.

Whoever winds up winning will square-off against #4 Virginia on Friday. This is a very dangerous Virginia team because they know they need to win to get into the tournament. Most of the time a team that gets a bye may wish for the worse team to win, but in this case the Wahoos may want the Pack to go ahead and TCOB on Thursday so they get another chance at a big win to impress the committee. Also, VPI-UVA is a big rivalry and the Hokies would love for nothing more than to ruin UVA's season.

This is probably the best three team bracket and the one that will provide the best game on Friday in N.C. State-Virginia, so I'm pulling for the Pack to get there.

We saw this matchup in the first round of last year's ACC Tournament. What was supposed to be a close game turned into another loss for Wake Forest in the ACC Tournament. The Deacs haven't won an ACC Tournament game since Skip Prosser defeated Georgia Tech 114-112 (2OT) in 2007, his final win as a head coach. I don't expect it to be any different tomorrow night.

Also, for you gamblers out there, Maryland opened as a -5.5 point favorite, so if you have common sense go bet on them. I hate to say that, but all indications point to this as easy money.

In all seriousness, Jeff Bzdelik is 0-7 vs. Maryland in his tenure at Wake Forest and the Terps just overpowered the Deacs in both meetings this year. Barring a super-human effort from C.J. Harris, this will be his last game in a Wake Forest uniform.

If/when the Terps win they will square off against #2 Duke on Friday night in a game that Coach K likely wants to see. The Terps knocked off the Devils in College Park on February 16th, and Duke will no doubt want revenge on their pseudo-rivals.

This could be a pretty intense game since Maryland needs to win this game to have any chance at getting an at-large bid to the NCAA Tournament. I think it will be closer than some think, but Duke wins it fairly easily at the end.

In the final game of the day on Thursday (and no doubt one that will be sparsely attended by anybody that is not a fan of these two schools), is Florida State vs. Clemson. FSU ended the season with two big home wins over Virginia and N.C. State, which puts those two teams in precarious positioning heading into this whole shindig.

On there other hand there is Clemson, a team that has not won since St. Valentine's Day (6 game losing streak). I don't want to say that Clemson has mailed it in, but their 45-43 late game loss to Miami seems to have deflated any hope they had for a tournament run this year.

Interestingly enough though, Ken Pomeroy has the Tigers as a favorite in this game (albeit it a small one with a 61-60 win). I don't really have a good feeling on how to choose this game, but I'm pulling for an upset so I'll go with the Tigers in this one. If not, then Michael Snaer will win the game on a buzzer-beater...BOOK IT.

UNC has been rolling aside from their abomination against Duke in the Dean Dome the other night. Not sure what exactly was going on there, but I don't think Florida State can beat UNC and we all know Clemson can't beat them (ever apparently), so I'm taking UNC to the semi-finals.

Obviously this is a bit speculative because I do not have a crystal ball to predict who will make it here, but I can make a good guess.

Whether or not Miami winds up playing Virginia or N.C. State, it should be a pretty good undercard to the second semi-final of North Carolina vs. Duke.

N.C. State would have beaten the Canes were it not for a late tip-in by Reggie Johnson in Raleigh. If the Pack can get by Virginia then I would guess that the good C.J. Leslie has showed up for the week and that makes them very dangerous.

I think both UVA and N.C. State are capable of beating the Canes, but will say from a viewing standpoint that I would prefer the up-tempo pace of the Pack vs. Miami than the drag-it-out pace of the Wahoos.

In the end since I am picking N.C. State to make it to the semis and Miami will benefit greatly from having played one less game. The Pack has narrowed their depth to 7, and maybe 8 players, so that could take a toll on the starters by Saturday. I'm taking the Canes to advance to their first ever ACC Championship Sunday game.

I know, I know. I look like pretty much every other media guy out there immediately just picking these teams to get to Saturday, but with the teams they are likely to play on Friday night it seems like this game is an inevitability.

Duke, with a full-strength roster, absolutely destroyed UNC on Senior Night in Chapel Hill last Saturday. Coming into this game there were many people, myself included, that thought the Heels had a great chance to knock off the Devils. After that performance though it is difficult to see UNC turning it around that much on a neutral court in just a week's time.

While the Greensboro crowd will be rocking for this one (with slightly more UNC fans there), this should be a pretty interesting matchup. If for some reason N.C. State makes the finals then there should be a fair amount of red sticking around too. If I had to guess I would say they would be pulling for Duke.

I'm going with the Devils in this one to produce the best matchup of the tournament for the Championship---#1 Miami vs. #2 Duke.

I'm guessing that a lot of people are writing the Hurricanes off after their late season dip. I, however, prefer to look at their entire body of work this season and believe that they have what it takes to not only make it to Sunday, but win their first ACC Championship.

In order to do this the Canes will have to defeat the #2 Duke Blue Devils, who, let's face it, would likely have been the #1 seed themselves if Ryan Kelly hadn't gotten injured.

Ryan Kelly nearly single-handedly defeated the Canes in Cameron earlier this month to help the Devils redeem themselves from a beat-down in Coral Gables on January 23rd.

A lot of people criticized Duke even after their win over Miami, saying that if it were not for Ryan Kelly the Canes would have won again. Most of those same people have quieted down after Duke crushed Virginia Tech and North Carolina in back-to-back games.

Miami doesn't like to push the pace, but showed in their 1.10 offensive efficiency in the second game against Duke that they can run and score with the Blue Devils.

Duke showed a bit of a weakness in their man-to-man defense with Seth Curry and Quinn Cook on the floor, resulting in slam dunks and alley-oops all over the place in the first half of that rematch. A good formula against Duke when these two are on the court is to use Coach K's overaggressive man-to-man defense against them and penetrate as deep as possible. This forces Mason Plumlee to make a decision as to whether to stop ball or stay on his own man inside.

Despite the Canes giving Duke all they wanted in both match-ups this year, I still believe that Duke will come out on top. Miami might be the older team, but Duke is the more experienced team come tournament time. The Devils bowed out in the semi-finals of last year's ACCT to the eventual champs in Florida State, and want to reclaim their title here in Greensboro.

While it would not surprise me at all to see Miami win if these two teams do meet on Sunday, I'll roll with Coach K and his Blue Devils in any ACC Tournament championship game.

Enjoy the tournament everybody and I'll be out there tailgating tomorrow afternoon and beyond for all the games, so if you know who I am and see me then come talk to me. I won't think you're too weird.