No.2 Florida State took advantage of four early Wake Forest turnovers to hammer the Deacs, 59-3 on Saturday in Winston-Salem.

Share All sharing options for: Turnovers doom Deacs in blowout loss to Seminoles

WINSTON-SALEM--The Wake Forest Demon Deacons came into Saturday's game concerned with Florida State's all-everything quarterback Jameis Winston. As it turned out, they should have been worried about their own. Senior Tanner Price threw 3 early interceptions, all of which resulted in Florida State touchdowns, and the 'Noles rolled to a 59-3 victory at BB&T Field.

Price, a four-year starter at quarterback, was benched during the 2nd quarter in favor of redshirt freshman Tyler Cameron, having completed 1 of 4 passes for 3 yards in addition to the turnovers. In addition to the passing woes, redshirt senior tailback Josh Harris fumbled a handoff that was returned by Jalen Ramsey 23 yards for touchdown. The Deacs turned the ball over 7 times in defeat (6 INTs, 1 fumble). The Seminoles' Nate Andrews was responsible for 2 of the 4 first half interceptions, returning 1 for a touchdown. 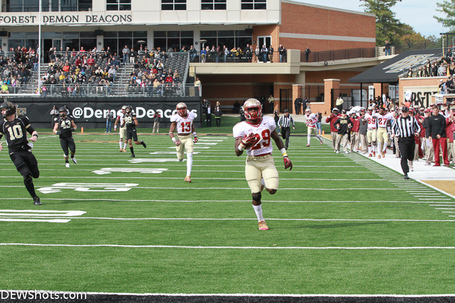 The Seminoles (9-0, 7-0 ACC) led 35-0 with 13:56 left in the first half, effectively ending the afternoon for the Old Gold and Black. The stands at BB&T Field emptied quickly at halftime save for many fans clad in the Garnet and Gold of Florida State. The 'Noles are home for the next two weeks against Syracuse and Idaho before closing out the regular season in Gainesville for their annual showdown with the Florida Gators. 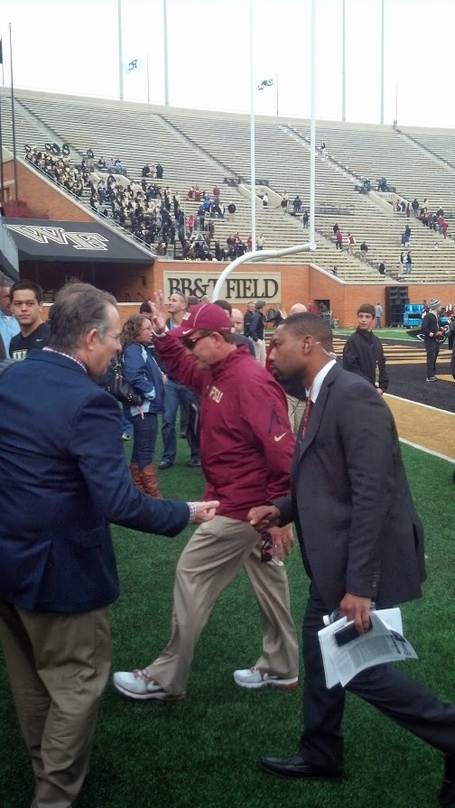 "You're talking about a football team that had 11 kids drafted last year," Grobe said. "I mean, that's unbelievable. You look at this football team, and I think it's probably the best one we've faced since I've been at Wake Forest, and that's after they lost 11 guys to the NFL last year. It's a pretty special football team."

The 59 points scored by FSU were the most given up in BB&T Field history, besting the 50 put up by UNC in a 1994 contest. The Deacs' Cameron fared a little better than Price in relief, going 5-19 for 63 yards but also throwing 3 interceptions. Wake Forest finished the afternoon with only 166 yards of total offense. 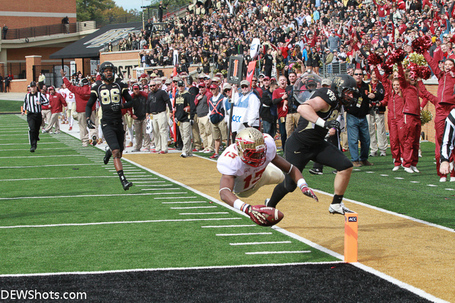 Wake Forest (4-6, 2-5 ACC) gets a week to lick its wounds before hosting Duke in a pivotal game on November 23. The Deacs needs wins against Duke and at Vanderbilt to qualify for bowl eligibility. Deacon fans can expect Tanner Price to remain behind center, but Grobe noted that the quarterback decision will ultimately be coach Tom Elrod's.