A Deacon's Journeys: Madrid versus Barcelona

Blogger So Dear's Griffin Kurzius explores the rivalry between Spain's two biggest cities, Barcelona and Madrid. The piece dissects the political tensions between the cities and how it boils over onto the soccer pitch.

Share All sharing options for: A Deacon's Journeys: Madrid versus Barcelona

First off, it’s been too long. For the past six weeks I have embarked in my semester abroad in Barcelona. The last time I was in the USA, the Demon Deacons were undefeated.

Wake Forest is, and always will be a home to me. So studying in Barcelona was a major adjustment. It is a small, densely-populated city on the water with tremendous beaches and nightlife (sorry Last Resort). This contrasts to the sprawling suburbia of Winston. Meanwhile, I live near the cultural center of the city, a far cry from the "Wake Forest Bubble."

But I currently miss the comforts of late night Cookout and early morning Bojangles. I digress, I have even grown to miss The Pit on occasion. And of course, the Deacs!

That being said, I have loved and embraced every moment of my journeys thus far. It has already gone so fast that I haven’t had time to sit down, relax and jot my thoughts down. My next piece will be sooner… and not as long.

I just felt it was necessary to tell this story unabridged.

Madrid and Barcelona: The Most Passionate Rivalry

Growing up in the suburbs of New York City, I was always engaged in sports rivalries. I was born wearing pinstripes. In seventh grade, my class had to write a paragraph on "the first law you would break if you would not be penalized." Instead of stealing a Lamborghini or robbing a bank, I wrote that I would urinate on Fenway Park.

I wanted to maintain this hatred for Boston beyond sports. I really did. That being said, I gladly love #TheRivalry and hate Boston College. But in truth, Boston is a city of history, a regional gem not a global goliath like NYC. Boston has a great beach front and brought Legal Seafood to the world. The people are forthright and fast-paced like New Yorkers. And politically, the cities are more similar than they are different. Beyond the realm of sports, Boston and New York are more allies than enemies.

I thought I knew sports rivalries. But I don’t.

Nothing prepared me for the competition between Madrid and Barcelona.

I learned early on that Madrid and Barcelona are far more than athletic rivals. These polar cities possess deep-rooted animosity towards one another. During the biannual mammoth collisions between FC Barcelona and Real Madrid (October 26th in Barcelona), the cities pause. Because here, the soccer matches are a microcosm of a far greater battle.

Barcelona, the capital of the Spanish province Catalonia, is in the midst of a fight for their freedom from the federal government in Madrid. The tensions have boiled over in the aftermath of the 2008 recession. Catalonia receives less than 16.91 billion in taxes than it pays or 25 percent of Catalonia’s federal taxes. Some Catalans believe the government in Madrid is purposely exploiting the fertile Barcelonan economy. Meanwhile, people from Madrid argue that as a wealthier state in a welfare-state, Catalonia must pay more than its share.

Embroiled in a political war, Catalonian citizens remain divided on the controversial issue of independence. Recent polls say approximately 46-57 percent of the population want independence. A vote will take place next year. 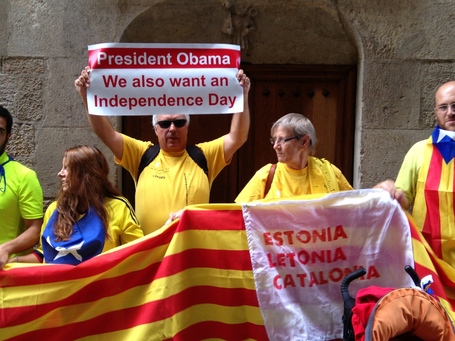 While the issue has escalated in recent years due to economics, a separatist movement has existed for centuries.

The two cities literally don’t speak the same language. In Barcelona, the primary tongue is Catalan—a fusion of Portuguese and French. Speaking Catalan was banned during the time of dictator Francisco Franco, and Catalans see their language as a huge part of their cultural identity.

Contentions with the Spanish state began in 1714—the year Philip V sieged the region and united Catalonia with the rest of Spain. For two centuries, Catalonians never forgot their customs but were forced to conform to Spanish ideals.

This took a turn for the worse during the Spanish Civil War in 1939. The division between the capital city of Madrid and Barcelona intensified during the controversial reign of Francisco Franco. Madrid supported the fascist ruler while he trampled over the rebel Catalan forces. Franco repeatedly gave Barcelona the raw end of the chorizo. He treated them like his incompetent baby brother, giving the region limited government support.

Almost forty years since his controversial reign, the Spanish government has yet to publicly denounce his tenure. Residents of Madrid are mixed on his ruling. He modernized the nation and fostered a great economic boom. But he controlled the press and ruthlessly murdered thousands. The citizens of Barcelona are less ambiguous about the Franco reign. They vehemently despise his existence.

Franco was a staunch supporter of Real Madrid. 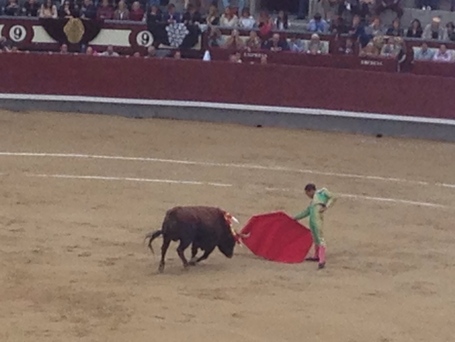 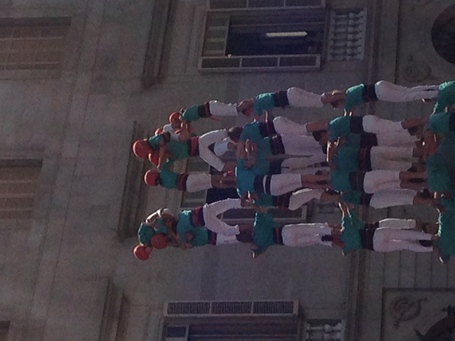 While many of the soccer players on Real Madrid and FC Barcelona are not from Spain, playing in El Clasico immediately throws them in the midst of a regional battle. A physical war between the rival cities, the battle for superiority and supremacy reigns on the field.

Without witnessing an El Clasico yet, it remains the talk of the city. Residents have circled October 26th in their calendar for months and spend aimless hours discussing potential strategies and in-game minutia to exploit the opponent’s weaknesses.

Tickets for the event start at $300 (I am currently taking donations… please support the GriffKurz to El Clasico Fund); while a standard game at Camp Nou, Barca’s archaic palace, costs $60.

The two franchises in Spain have been successful since the founding of La Liga, but developed into powerhouses in recent years. They have combined to win 54—Madrid with 32 and Barcelona at 22—of a total of 83 La Liga Championships. Even more remarkably, they have won 25 of the last 30 Spanish league championships.

The rivalry began in the 1930s as a battle between the two largest cities in Spain. But with the wave of fascism, El Clasico escalated into a game of politics. After Franco’s coup, he ordered his troops to arrest Josep Sunyol, the president of FC Barcelona and a leader in the Republican Left of Catalonia.

Even after the death of Franco in 1975—and the institution of a democracy—regional pride has dictated much of the differences between the clubs. To this day, they apply contrarian styles in the front office, in coaching meetings and on the pitch.

Real Madrid employs a Galacticos methodology, which refers to their desire to acquire the best individual talent every year. Madrid fans laud the team’s desire "to win at all costs" and pay for the world’s top soccer players.

Meanwhile, the Barcelona faithful deride the strategy as a reflection of Madrid’s prima donna ethos. Even with world class talent, Madrid falls short on teamwork and camaraderie. The players, Barca fans claim, care more about individual statistics than team goals.

On the other hand, Barcelona prides itself in finding the world´s top youths and training them at their private facilities called La Masia. In Catalan, masia refers to the familial house and symbolizes the cultural tradition for children to live with their parents into adult life. The name encompasses the ¨whole is greater than the sums of its parts¨ ideology.

Among the projected 11 starters for FC Barcelona this season, eight graduated from La Masia.

Their prized-signing of the offseason Neymar, who reported took less money to play for Barcelona instead of Madrid. In his first interview, the

Brazilian phenom repeatedly stated how excited he was to play with Lionel Messi and help the team.

Even the best player on each team—and indubitably the two best players in the world—embody the image of their respective team, and enhance the dichotomy between the clubs.

The Portuguese native Cristiano Ronaldo from Madrid is the archetypal prodigious diva. He is tall, powerful goal-scoring machine, who speaks freely about his soccer prowess. He reaches the back pages of the newspaper almost as often as the front.

Meanwhile, Lionel Messi from Argentina is a soft-spoken, diminutive southpaw who won FIFA’s Player of the Year Award four straight years and who broke the European record with 73 goals. He shies away from the media and embodies the mesia team-first mentality.

One thing the rivaling clubs do agree on, however, is their public claims to be a soccer club for entertainment purposes only. They claim to have no political agendas. Meanwhile, FC Barcelona’s long-running slogan mes que un club, "more than a club" says otherwise. Barca’s new alternate jerseys resemble the Catalan separatist flag. This season, the city’s poster boys are a walking, talking advertisement for the entire world to see. 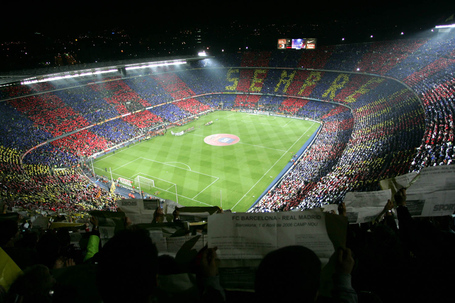 Only separated by a 2 ½ hour express train, the forever linked cities appear worlds apart. A majority of Catalonian students boast they never have stepped foot in "those lands." Not all of them advocate separation, but they unanimously agree that Madrid is the enemy and their grievances of Spain’s capital could fill Camp Nou to the brim.

Engaged in the most tempestuous times of the Yankees battling against the Red Sox, I thought I knew rivalries. But I don’t.

Hundreds of years of pride and disgust. Contrasting lifestyles and personalities. Even the possibility of independence.

The streets of Barcelona will be empty. Every person glued to the television. Heart pounding, body sweating, because this is more than a game.

I thought I knew sports rivalries. But I don’t.

Not until kickoff will I fully understand the significance of El Clasico.