Deacs in the Desert: Douglas, Hamby lead Wake Forest to victory over Arizona

Jennifer Hoover's young Demon Deacons opened up their West Coast trip with a solid 70-58 win over Arizona. Wake will play Cal on Friday.

Share All sharing options for: Deacs in the Desert: Douglas, Hamby lead Wake Forest to victory over Arizona

The Wake Forest women's basketball team began their "West Coast Swing" with a bang Tuesday afternoon, defeating the Arizona Wildcats 70-58 in Tuscon. The Deacs were one again led by senior Chelsea Douglas (22 points, 4 assists), who shot 5-11 from the three-point line in the victory. Dearica Hamby (18 points, 10 rebounds) recorded yet another double-double after just missing one against Radford.

Freshman guards Ataijah Taylor (9 points, 5 rebounds) and Jill Brunori (8 points) helped fill the scoring void left by Kelila (Kay Kay) Atkinson and Millesa Calicott, who were held in check for most of the game by Wildcat defenders. The win was the first road victory for the Deacs who now travel to Reno, Nevada for a date with California in the first round of the Nugget Classic.

"It feels great to get this first road win against a Pac-12 team," Hamby said. "It will help us out a lot, long-term. I think they were so concentrated on Chelsea that they forgot that I can score, also. This is a great win to go to play Cal. It will give us a lot of confidence. We can beat them."

Wake Forest has now won three straight games after starting 1-2 after an exhibition loss to Wingate. Tasked with replacing five seniors, three of whom were in the starting rotation, second-year head coach Jen Hoover's team was picked to finish 12th in the ACC this season. If the Deacs are to surpass that expectation, Hoover is counting on the Douglas to lead the charge. 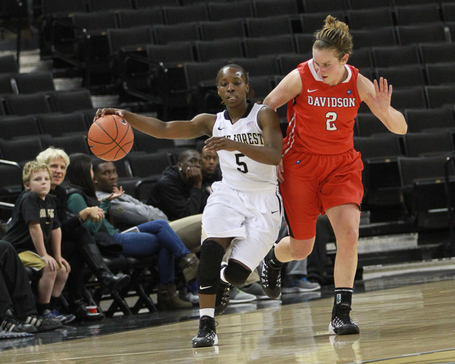 "She's probably the most driven kid I've ever been around," Hoover said. "I've been around some pretty tough (kids), and she's as driven if not more than any of those kids going into a senior year. A lot of kids figure it out after that senior year, and then they try to do it in the postseason and I think she saw that happen a little bit last year. I think the difference with Chelsea now is she isn't doing it by herself. I think she really understands that we're not going to go as she goes this year, it takes everybody. I think that's what a difference a year makes."

Hamby is regarded as the toughest Deacon to game plan for, and Wake will need her to improve greatly on last year's 10.6 points per game. Hoover surmised that Hamby was probably a little too deferential to the senior leaders last season, but is now finally ready to show what she is capable of doing. 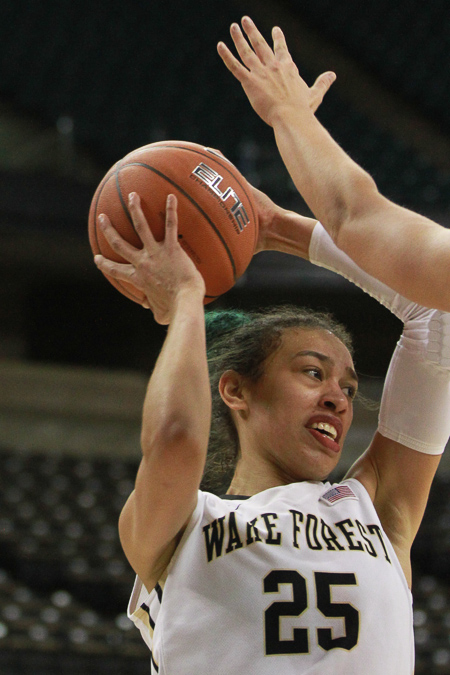 "With Dearica I think last year was her coming-out year, a little bit," Hoover said. "She figured out how much we relied on her to be consistent not only on the offensive end of the floor but just as much on the defensive end of the floor. She has to anchor the defense. She's the one that everybody in the conference is worried about defensively. I talked to a former coach who was in the ACC last year and he asked me about her, and he said ‘That kid's a pro.' We constantly tell her that, and it's her kind of understanding that she is a pro and being devoted to that piece of it."

Hoover has a reputation for generating group buy-in relatively quickly, and that was very apparent in last year's ACC Tournament. The Deacs blew out Georgia Tech in the opening round (after getting pounded by the Jackets just days before) and pushed Alyssa Thomas and national powerhouse Maryland to the brink of elimination before falling in overtime. As Hoover and Douglas addressed the media following their tournament ouster, it became apparent that Hoover finally had a team that was "all-in."

"My biggest philosophy is that the number one thing they have to understand is how much you care about them," Hoover said. "If they know how much you care about them as an individual, they'll do pretty much anything you ask them to do. I try to make sure our players understand and know more than anything our staff cares about them as people- what their goals and dreams are, what they want out of life, just the whole gamut."

That philosophy seems to work on the recruiting trail, too, as Hoover and her staff landed three top-100 recruits from the 2014 class. Amber Campbell, Nicole Floyd and Taylor Gordon all signed National Letters of Intent to play for the Deacs next year. Per a Wake Forest release, Prospectnation.com ranked the class as No. 15 overall and No. 6 in the ACC. It's the second straight top-25 class for Hoover and her staff.

"Amber, Nicole, and Taylor are all extremely driven, humble, and passionate, and they epitomize the values of Wake Forest Women's basketball," Hoover said after the signings. "There is no doubt that all three will make a meaningful impact on the basketball court, in the classroom, and out in the community."

In the meantime, the Deacs will have to find a consistent third scorer to compete in the meat grinder of the newly-expanded ACC. It was hoped that redshirt freshman Atkinson would be that player, but she has been nursing an injured hamstring since Fall break. Atkinson finally made her debut against Radford last Friday, scoring 20 points and earning rave reviews and a sigh of relief from Douglas. 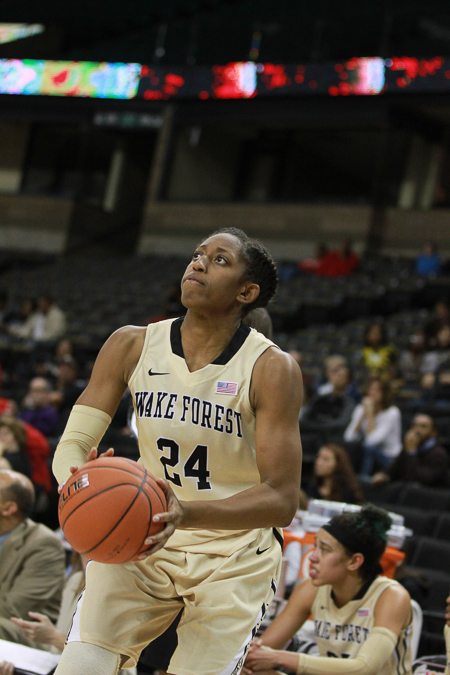 "I'm happy to have her back," Douglas said. "It opens up the floor a lot. It's good to have an extra scorer out there with you that can fill it up at any time. She's been around since last year, so it's to see her finally get out there and see what she can do."

The Deacs' game against the Cal Bears is at 10:30 p.m. ET Friday night. They will play either Idaho or host school Nevada in the finale on Saturday before heading back to Winston-Salem. Follow @JP_Mundy for links to live streams of this weekend's games.