Wake Forest may not ever see any benefits from Maryland's substantial exit fee, but the Demon Deacon football team gave the Terrapins a parting gift of its own, winning 34-10 on Saturday at BB&T Field. Quarterback Tanner Price became the second ACC player since 2000 to rush, throw and catch a touchdown , and senior flanker Michael Campanaro broke Desmond Clark's school record for receptions to cap a happy homecoming weekend for the Demon Deacons (4-3, 2-2 ACC). 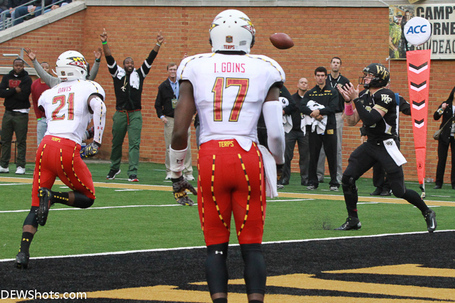 "It was a lot of fun out there today," Price said. "We had a lot of energy offensively, defense did a really good job and put us in good positions to put points up. We did a great job of capitalizing for the most part, and it was a lot of fun today."

During the victory, Price became the third quarterback in Wake history to throw for over 8,000 yards in a career. Head coach Jim Grobe, who tied the legendary Peahead Walker for career victories (77) heaped praise on his senior quarterback, who has been a lightning rod for criticism as the Deacons stumbled out of the gate in 2013.

"I thought he played really well, and I thought he also played really well against North Carolina State," Grobe said. "I think he has put together two games back-to-back which is pretty special. We have five more games against teams that are really talented, so it is going to take a great effort out of him every week for us to be good on offense." 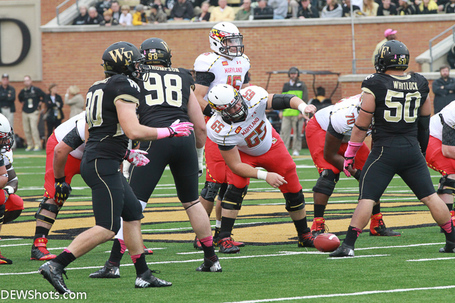 Senior nose tackle Nikita Whitlock set the tone for the afternoon on the game's very first play, sacking Terrapin quarterback C.J. Brown for a 14-yard loss. After a 3-and-out, the Deacs took over on the Maryland 36 courtesy of a 23-yard Campanaro punt return. Two plays later it was first-and-goal on the Terp 3-yard line, as senior Josh Harris gashed the defense for a 28-yard gain. The 5-play, 36-yard drive was capped when Harris burst over the goal line for the first touchdown of the day.

"I came out fast and I really got them thinking," Whitlock said. "I guess they thought they could single block me at the beginning and when they tried I took advantage of the single blocks. Towards the end of the game they started doubling me and leaving my partners open like Zach Thompson, and he capitalized on it."

The Deacons once again used wide line splits and multiple 4 and 5-wide formations on the offensive side of the ball. The spread look once again allowed Campanaro to run free through the secondary, as he followed up a 12- catch, 153-yard performance against N.C. State with 11 receptions and 122 yards. He was more excited, however about his two completions on the day.

"When you hear plays like that called from the sideline, you kind of get excited," Campanaro said. "But you have to calm down so you don't mess it up. That was fun, Tanner and I switching roles."

Campanaro's record-breaking 217th reception came on the penultimate play of the fourth quarter, as the Wake Forest coaching staff frantically tried to get him the record. The game was well in hand, but Grobe had a reason to keep throwing to his star flanker.

Lost in all the offensive fireworks was a stellar afternoon for kicker Chad Hedlund, who gave the crowd a jolt by booting a career-best 51-yard field goal to end the first quarter. The long attempt came on fourth-and-14 from the Maryland 34. The Wake Forest offense originally stayed out, as if they were going to go for it, but after a timeout the kicking unit came on to finish the drive. Hedlund, who has battled consistency issues, then kicked another from 38 yards in the fourth quarter to officially get the victory party started on Deacon Boulevard.

Despite the dominating performance from the Deacs, Maryland (5-2, 1-2 ACC) outgained Wake Forest 383-307 in defeat. Starting quarterback C.J. Brown was 15-24 for 137 yards and no touchdowns before being pulled in favor of backup Caleb Rowe (12-27, 1 TD). Brown's primary offense was throwing 2 critical first half interceptions, one to Merrill Noel and the other to A.J. Marshall, both of which ended up leading to Wake Forest touchdowns.

"It's exciting," Marshall said. "I really felt like it was a team win. We really focused hard on these past two weeks, especially with the bye week, to get to know Maryland. I really feel like Coach [Grobe] put us in a good position to win."

Not only did Maryland lose the game, they also lost the services of Stefon Diggs and Deon Long for the rest of the season. Both suffered leg fractures during the game and had to be taken off the field in a stretcher. Both Long and Diggs appeared to get injured on the same play during the first half, but Diggs remained in while Long was carted to the locker room in obvious pain. Diggs suffered his leg injury during the second half, eventually getting taken to the locker room, as well.

"It's unfortunate," Maryland coach Randy Edsall said. "I feel bad for both those guys. We got to make sure we move forward. What has to happen is we have to have guys step up and guys go out there and play with the kind of intensity that you have to play for 60 minutes. We didn't get that today."

Next up for the Deacs are the Miami Hurricanes (Saturday, Noon, ESPNU), currently ranked No. 10 in the BCS standings. The Hurricanes received a scare in Chapel Hill last Thursday night before finally edging the North Carolina Tar Heels, 27-23. The Deacons will be huge underdogs on Saturday, but will look to carry their newfound momentum forward against the mighty Hurricanes.