A happy coach Jen Hoover said, "I really thought the difference started this week in practice. We had two of our best practices going into this. You could see a sense of urgency and almost like, 'Okay, it's here, let's go with this.' 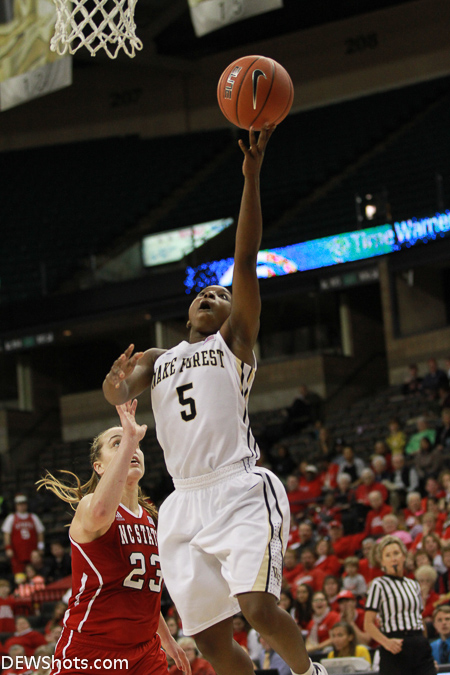 "They know night in and night out we've got to play hard. I started that way, with hard practices. We had a few injuries because of it, but like I told them, that's what it's going to take. Against a team like this, we had to work to get quality shots every possession. Quality shots that we could make. We talked about that the last few days, and that means you've got to take care of the ball. If we worked for it we could get some good looks. "

Wake Forest employed a frenetic, physical defense from the outset that gave Wolfpack star Kody Burke fits for most of the game. North Carolina State, ranked in the top 30 nationally in scoring, was held to 36 percent for the game on 22 of 62 shooting. The Deacs forced 20 turnovers, which led to 18 points. Wake Forest more than held their own in the paint, scoring 36 points against the formidable Wolfpack post players. Along with Hamby, senior Sandra Garcia was a force inside with 8 points and 8 rebounds.

"I thought their defense dictated the game, period," said Wolfpack head coach Kellie Harper. "Their defense was leading into their transition game ... they looked great scoring. They sprinted the floor, they were fresh. We were just a step slow in getting back."

"We did not focus early on. We missed some easy layups early in the game and those are the ones that you've got to knock down to give yourself some confidence. Then, you've got to credit their defense. We didn't get a lot of wide-open looks. We had to make tough shots when we did score. I think they had a really good defensive game plan and our kids just didn't handle it." 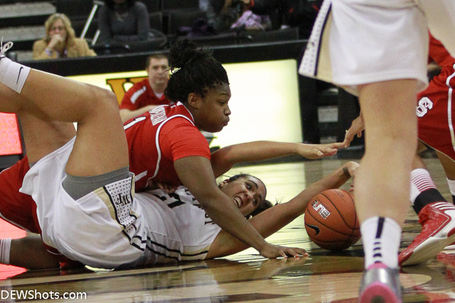 Sandra Garcia on the origins of the intensity on display against State:

"Our last three practices we've been going hard, we've been going live, we were focused. N.C. State's a great team, and we had to compete with their transition points, their big post players."

Dearica Hamby on outsiders' perceptions of the Lady Deacs:

"I'm sure a lot of people doubted us with the loss we took to Virginia Tech but I think that we made a statement tonight."

Hamby on improved team communication on the court:

"Coach always focuses on communication, so as a team I think we're trying to do that a lot more."

Garcia on the sense of urgency for the Wake Forest seniors:

"Coming into this game we were all like, 'This is our last time playing N.C. State at home so let's make it a good memory for the seniors and the rest of the team."

Hamby on the busload of N.C. State fans that showed up:

"I think I heard our fans a little bit more. Our fans definitely stepped up."

"When we played behind them they didn't really want any physicality."

"We know how they play, we'll just start working on Tuesday when we get back in the gym preparing for Florida State."