The Duke Blue Devils used an impressive second half deluge to defeat Wake Forest 73-44 before a raucous crowd of 3,127 in Winston-Salem on Sunday afternoon.

"I love the fact that we were very aware of 5 and 22 (Chelsea Douglas and Lakevia Boykin), held them down from what they've done, and also 25 (Dearica Hamby). Elizabeth is feeling more comfortable, even when people are climbing on her arms. She's getting her balance back. Being out for nine months, and then she's expected to make shots with people all over her. The bottom line is you've got back into a rhythm of that. She practiced well and had kind of a rhythm today, of putting down shots even though they were more difficult." 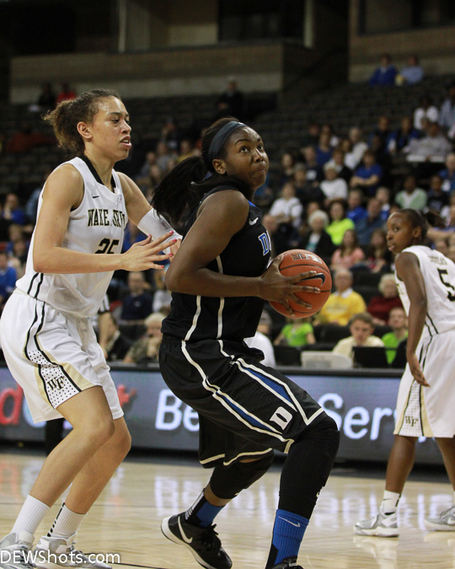 "I also loved Chloe and Richa off the bench. Their confidence ... just their poise and confidence. They know what's going on out there, so we don't lose anything, so you're looking at a team that very seriously seven or eight deep in terms of not losing anything and also bringing a lot of confidence." 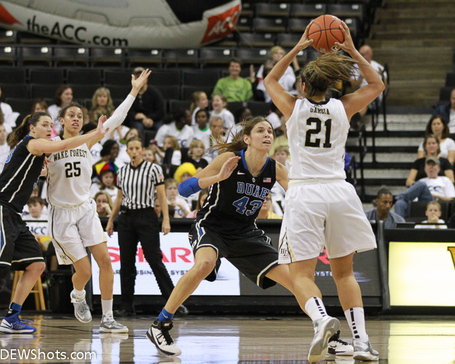 The Deacs were their own worst enemy on Sunday, allowing 26 points off 23 turnovers. Wake Forest found itself down only 11 at the half, and were nearly even with their foes in rebounding margin. However, Duke only committed 4 first half turnovers to Wake Forest's 14, thus gaining the advantage on the scoreboard. The Deacons were lead by Lakevia Boykin's 12 points, while Dearica Hamby was once again in double figures with 11.

Said Deacon head coach Jen Hoover, "I think Duke's a very good basketball team, and we knew that coming in. I thought the physicality of the game, I did not think we responded very well to. That's something we have to look at. We got to be able to respond and be ready to go." 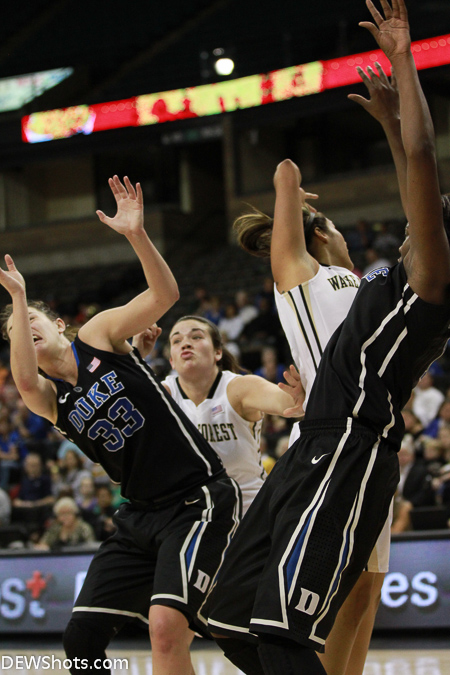 "We had a little momentum coming into this game. We just had a big win on the road against a ranked opponent. Coach just told us there's nothing to get our heads down about, we have to continue with the way we were playing and come into the Clemson game with the same mentality."- Senior guard Lakevia Boykin

"I know they're disappointed. I'm just as disappointed. I'm definitely not a coach that's into any kind of moral victories. I think we have to learn a lesson, it's got to be a hard one. It's got to be as hard as Virginia Tech's lesson was, and that was a hard one we had to take but we learned and we grew and we came out and showed how much we grew from it. We have to do the same thing with this one."- Coach Jen Hoover 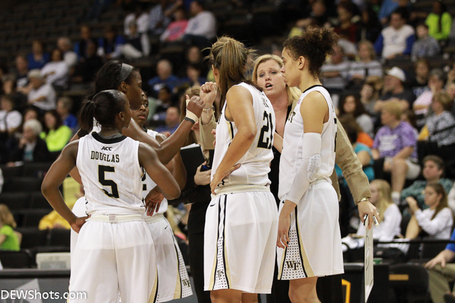 "It starts with the way we practice on Tuesday, and they know that. That's been a big growth and change in this team. Our practice intensity levels have gone up tremendously since the beginning of the new year. Again, I don't know what that is- is that five seniors knowing that's about it, this is their last shot through the ACC? Is it the fact that we are in conference now?"

"A lot of it, I think our non-conference schedule has prepared us for what we're going to face night-in and night-out. Playing Kansas on the road, playing UCONN in the Virgin Islands, playing Purdue, playing Purdue, playing Marist. Playing teams that are NCAA tournament teams. We did not come through and play an easy schedule to then get to the conference and find out what it was going to take to get into a battle. We've been through those battles."- Coach Jen Hoover