Wake Forest released their finalized depth chart for Duke this morning, and there is one big change that Demon Deacon fans have to be elated to see. 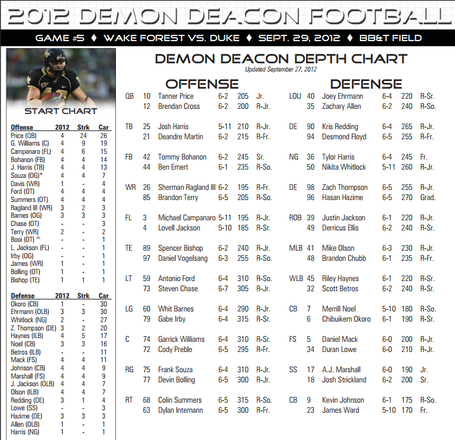 Unless if I am missing something here there is only one big change from last weeks depth chart vs. the Army Black Knights, and that is NG Nikita Whitlock's inclusion in this week's depth chart versus the Duke Blue Devils. While he is listed as the back-up nose guard to true freshman "Big Baby" Tylor Harris, if Nikita gets out there and his ankle feels good I bet he gets a lot of snaps.

On Tuesday Nikita said he was shooting for 60% of the snaps just because his endurance was a little off from not running in two plus weeks. Coach Grobe was a little less optimistic, but that could very well be coachspeak from the expert in that area.

Barring a setback, I expect Nikita to play about 50% of the snaps tomorrow. He is absolutely crucial to what Wake Forest wants to do on defense, especially against a high-powered Duke passing offense. Getting pressure on Sean Renfree and disrupting the short slants and bubble screens is a critical key for this Wake Forest defense. Not to mention closing up the middle for an already anemic rushing attack.

Whitlock replaces graduate student Hasan Hazime, who shifts over to backup Zach Thompson at defensive end. This bumps R-So Johnny Garcia out of the two-deep for this weekend.

It's also nice to see DE Kris Redding slated to start again even with limited practice time this week because of an ongoing achilles injury that he reaggravated against Army.