Offensive Players to watch
Defensive Players to watch
OFFENSE
The Army Black Knights run the unique wishbone, triple option offense, which starts and ends with quarterback Trent Streelman. He is a senior now up at West Point and has totaled over 4,000 yards combined in passing and rushing over three years plus. He runs the offense to a T and has perfected reading opposing defenses and deciding what to do with the football. Streelman must first read the defensive tackle/linebacker and decide whether or not he will hand off to the FB. If that player commits to the tackle on the FB then he will pull it out of the FB's stomach and continue on with the play. The goal from there is to either turn it up field as quickly as possible, or pitch to the tailback/wingback that is behind him on the play. The option play has a big potential for lost yards if run poorly, but also can reap huge gains if run correctly.
Jared Hassin, the Army leading rusher in 2010 with over 1,000 yards is listed as one of the back-up wingbacks (to Terry Baggett, who may not be able to play on Saturday). So far this year he has run 3 times for 17 yards, but he may see that workload increase a lot on Saturday. Also, as discussed yesterday, Raymond Maples had no-contact in yesterday's practice and it is unsure of whether or not he will be ready to go. If he cannot play then expect to see a heavy dosage of his backup, Jon Crucitti, who has run the ball 6 times for 43 yards this year. This would be a BIG loss for the Knights, as Maples has run for 100 yards in each of his first two games this season.
This is just speculation, but if neither one of the starting running backs can go for Army it would be pretty devastating for them. The wishbone offense is all about timing, reads, and knowing where to be on the field. Seems like throwing in players that haven't played a lot with Streelman, or in Hassin's case haven't played with him too much in a couple of years, could be very detrimental to the team's overall cohesiveness and effectiveness.
Fullback Larry Dixon had a career day last week against NIU, where he garnered the Independent Offensive Player of the Week award after running for 136 yards and 3 TD's on 28 carries. That indicates to me that the Huskies were happy for Streelman to handoff to Dixon, and instead focused on Streelman and Maples on the outside.
I would discuss the wide receivers but it is somewhat pointless as there have only been four completions on the year. The wideouts in this offense are expected to be very good blockers and occasionally go out for a pass. Of the four completions this year, each has been to four different players.
Defense
When you look at the numbers on the Army defense, it is hard not to lick your chops if you are Tanner Price and the Wake Forest offense. They rank 118th (out of 124 teams) in points per game at 41.5 PPG. They also rank 101st in both rushing and passing defense. This would be an ideal game for the Wake Forest offense to try to get their run game working, as the Black Knights are allowing over 200 YPG. I hope Josh Harris and DeAndre Martin are getting as excited as Tanner Price is.
Most people know that Army runs a unique offense, but they also run a very unique defensive set as well called the "flex" defense (or to be exact, the "Double Eagle Flex Defense"). This involves a special bandit and rover linebacker. The flex defense is essentially what it sounds like---the Black Knights are very flexible in what defenses they can run.
The "rover" linebacker is essentially a hybrid safety-linebacker that can drop back in coverage or blitz up close from the line of scrimmage. The "bandit" linebacker is a hybrid linebacker-defensive line player, and can switch that up as well.
Utilizing the bandit and rover positions on the field at the same time can allow Army to run anything from a 3-3-5, to a normal 3-4/4-3, or even a 4-2-5. This puts a lot of pressure on the opposing teams QB to read the defense, find where the bandit and rover linebackers are lined up, and make the correct calls at the line of scrimmage.
The "Double Eagle" comes from the fact that Army lines up their defensive tackles across from the guards, which will occupy the guards and the tackles (3 spots with two tackles). This allows for unique blitz schemes from all over the field if run correctly. (See Image below) 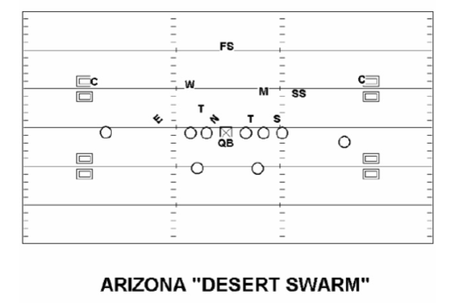 via www.lostlettermen.com (read this article if you want more knowledge of the defense)


Regardless of the difficulty that the flex defense can present, it has not presented much difficulty so far in the 2012 campaign. Against Army last week, the Northern Illinois Huskies held the ball for just 6 minutes and 2 seconds in the entire first half, yet managed to score four touchdowns in that time span. Overall, the Huskies amassed 515 total yards (342 passing, 173 rushing, including an 88 yard TD run by QB Jordan Lynch in the first quarter.
If Interdonato is right in his blog then there will be some changes in the secondary before this week's game against the Deacs. In practice yesterday Fr. Chris Carnegie and So. Marquis Avery were running as first teams cornerbacks, Sr. starter Josh Jackson didn't see practice yesterday due to an injury. If Avery were to start this weekend he would see his first action as a Black Knight.
Starting defensive end Zach Watts also didn't practice yesterday, but the Black Knights should get a pretty big morale boost if team captain Jarrett Mackey, who practiced yesterday with the first team could make his season debut in place of Watts.
Overall yesterday there were three freshmen practicing with the first team (aside from Carnegie at CB there was Brandon Fusilier-Jeffires at FS, and Alex Meier at the bandit linebacker spot), which for a complex defense could be a problem for the Black Knights to run on Saturday against an experienced Wake Forest offense.