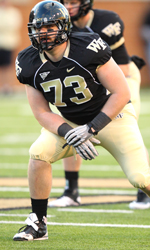 Wake Forest RS Junior Steven Chase tore his ACL and meniscus in a practice injury on Tuesday, an MRI confirmed earlier today. Chase, an offensive lineman who was recently dismissed and reinstated on the team before the season started, appeared to suffer the injury after being involved in a scuffle with defensive lineman Nikita Whitlock.

Chase was slow to get up from the bottom of the pile after the two were involved in a pushing match and was seen leaving practice minutes later to head back to the locker room. Today, the bad news was confirmed as the MRI came back revealing a torn ACL and meniscus. The usual recovery time for this injury is between 9 months and a year. Chase is presumably done for the season.

Chase was slated to start at left tackle after playing in 11 games his sophomore season, starting three times. With this injury it is likely that Devin Bolling, a RS Junior as well, will take over the starting spot. Chase was expected to provide some experience to a young offensive line already riddled by departures and injuries. Daniel Blitch left the program earlier in the week, Ramon Booi has been sidelined with knee injuries since switching to the offense, and Dylan Heartsill's career is likely over with recurring back issues.

Good luck to Steven in your recovery and we hope to see you back next year big guy.