On the heels of me taking to Twitter to bring eyes to the fact that the Official Game Notes and Depth Chart hadn't been released yet for the Wake Forest website, they surprised me and released it a few minutes ago. The depth chart still isn't updated for the week yet, but something is better than nothing I reckon.

The biggest thing to take note of now is that Alex Kinal has, at the moment, won the starting punting job over Alex Wulfeck. That goes along with what I've seen at practice, as Kinal has been more consistent than last year and has the stronger leg. It's also awesome that he is only a RS Fr, which will be good for years to come!

Other than that the only change I can think of is that Matt James will replace Terence Davis behind Sherman Ragland III (glad to see Sherman starting) in the two-deep depth chart. Davis separated his shoulder and will be out 3-4 weeks. I assume the injury occurred after the depth chart was published last week.

Click through for the official depth chart and analysis 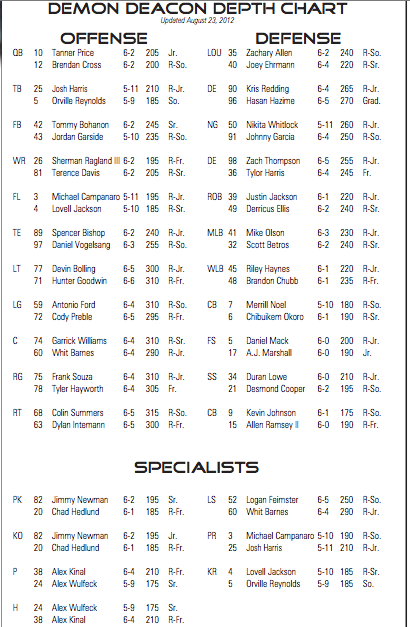 This depth chart will be updated on Thursday/Friday, and I will fix it here when it is changed!