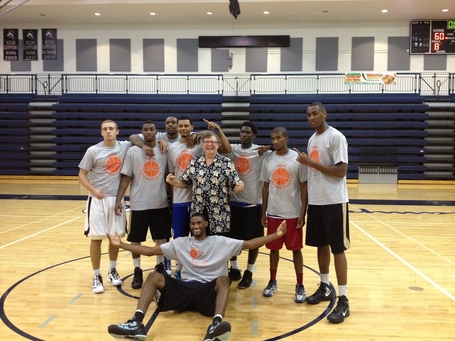 Click through for information, stats, and analysis from the final night of the Triad Summer League Pro Am.

The semifinals and finals of the Wake Forest Triad Pro-Am Summer League certainly lived up to the billing as two of the three games went down to the wire, and the first semifinal game was tightly contested throughout the game until Grace, Tisdale, and Clifton were able to pull away in the second half.

In the first game, the big surprise was C.J Harris' absence from the court. He rolled his ankle in a workout earlier this week and did not participate tonight. He did however appear to be walking fine and said he was just staying off it just in case. This does not appear to be a problem whatsoever moving forward. Without Harris on the floor, the team was led by former Demon Deacon L.D. Williams, current Yale player Mike Grace, and current Wake guys Devin Thomas, Arnaud Moto, and Spencer Jennings.

The Deac team got off to a fast start with a 24-9 start fueled by the perimeter play by L.D. and the solid inside play from Devin Thomas. After a quick 12-0 by the Mountain Fried Chicken team, primarily fueled by host Kishon Bishop who was able to get down the lane and attack the paint with ease, the Deacs were able to bounce back with continued consistency from L.D. and Thomas.

This was the best game we have seen thus far from incoming freshman Thomas who was absolutely dominant inside. A lot of the time it is difficult to tell how guys will fit in after watching the loose-style of Summer League, but Thomas ended up with 16 points and 18 rebounds and was an absolute force inside. At one point L.D. came over to the scorer's table and said "lemme see Devin's rebounds, I don't know what his stats are but I do know he's grabbing all the rebounds." Thomas has a solid ability to box out with his 240 pound frame and looks ready to compete from day one down in the block if he can avoid getting into foul trouble.

Incoming freshman Moto also had a solid night recording 9 points, 3 assists, 3 rebounds, and 3 steals. Moto reminds me of a typical 3 who floats out around the perimeter but can also move inside with solid athleticism. While Rountree is more of an anomaly at his size, Moto is a guy you see a little bit more of night in and night out at the D-I level. Moto can definitely use some work on his inside game and ability to get to the basket, but with some solid coaching he will get shot selection under control and will be a factor for the Deacs. Moto has a solid frame already and will only get stronger, I liked what I saw from him throughout the Summer League. He is more of a quiet player who you don't recognize much, but occasionally flies in to make a remarkable play and you notice he has 6 points and 6 boards.

There was a lot to like from this first game but the biggest thing to note was that Devin Thomas has the ability to play like an absolute beast at times. His biggest issue is staying out of foul trouble and that's something that coaching can address.

In the second semifinal, the Deacs struggled out of the gate, as Walt Baxley scored the first six points of the game and the Holcomb-Fayes (HF)s led 14-6 early on. The Wake Forest team recovered by the end of the half, however, behind an incredible performance by Aaron Rountree. The freshman displayed his tremendous versatility, tallying five points, seven assists, and six rebounds in the half, including an assist which tied the game at 31 as time expired. He ended up finishing two assists and one rebound short of a triple-double. Rountree's early excellence enabled Codi Miller-McIntyre to win the game in the second half and overtime. The combo guard was held scoreless in the first half, but exploded for 17 points after the intermission, including some incredible late-game heroics.

Down by five with 46 seconds left, Chase Fischer drove to the rim but missed a difficult layup. Rountree grabbed the rebound and finished through contact. The three-point play brought the Deacs within two. After two made free throws by Baxley, Miller-McIntyre converted a three-point play of his own, after he was inexplicably fouled on his drive to the rim. The HFs then made both free throws again, setting the stage for an epic finish. Down by three with under 20 seconds left, Miller-McIntyre got into the paint but lost the handle; the HFs had an opportunity to complete the steal, but the ball slipped out of their hands, providing the Deacs new life. Once again, Salem Smiles turned to Miller-McIntyre, and this time he delivered. The 6'3 guard elevated over his defender, draining a fadeaway three-pointer to tie the game.* The HFs raced down the court and had a good look at a three of their own as time expired, but it rimmed out.

With the crowd buzzing, the overtime period did not disappoint. There were four lead changes in the two minute period, and once again, the game came down to the clutch shooting of Miller-McIntyre. Down by a point with 20 seconds left, Miller-McIntyre missed a three, forcing the Deacs to foul. This time, however, Salem Smiles managed to foul someone other than Baxley, and the HFs missed both free throws. Now down by a point with under 10 seconds left, Miller-McIntyre drove to the basket and drew a foul. After his first free throw did a 720 on the rim, Miller-McIntyre calmly made the second to give the Deacs the lead. The HFs were able to generate a decent look from three as time expired, but once again, the iron was unkind. The Deacs won, 75-74, advancing to the league championship.

Interestingly, of the four Deacs on Salem Smiles, it was the two freshman that made the biggest impact. Sophomore Chase Fischer finished with 13 points along with 3 rebounds while consistently deferring to Miller-McIntyre down the stretch. Fellow sophomore Daniel Green had a relatively quiet nine points and nine rebounds.

*We have video of the shot. Should be posted sometime tomorrow.

Following the two semi-final games, the championship was really kind of a let down in terms of level of play. This was of course to be expected however after the Salem Smiles emotionally and physically draining win in the semifinal overtime win against the HF's.

This game went back and forth at times, but for the most part saw SalemSmiles and Aaron Rountree battling as hard as possible to grab every last rebound, every last loose ball, and contest every basket. Like last night, Rountree once again showcased his 100% intensity every second he was on the court. Wake fans are going to absolutely love Rountree for his effort, his personality, and his ability to lay some trash talk out on the court when necessary. A couple of times throughout this final Rountree and LD were jawing back and forth and Rountree got LD to commit two offensive fouls (somewhat questionable ones I might add) which were really just frustration fouls where Rountree was contesting every inch of the court when LD was off the ball.

Rountree's demeanor on the court really reminds me of LD's so it was fascinating to see the two going back and forth, jawing about who's city this is, which managed to draw the mild-mannered and quiet CMM into the fray when LD continued to chat to Codi while he was on the bench. I like what LD brings to the Summer League because he goes out there, gives it his all, and riles up the Wake guys to give them a look of what it's like out on the big stage. It's interesting to note as well that Reggie Johnson was at the game sitting behind us, and was pretty impressed with Rountree's play. I'm very excited for what he brings.

As noted earlier, the game itself was pretty sloppy. Codi Miller-McIntyre continued his stellar play from the final ten minutes of the second semi-final and ended up with 11 points, 4 rebounds, 4 assists, and 2 steals. Moto ended up with 5 points, an assist, and 3 rebounds but was all-in-all less effective than the earlier game and looked tired at spurts during the contest. Thomas followed up his big game on the boards with another solid performance coming in with 11 points, 8 rebounds, 3 assists, a steal, and 3 bloks. He was in foul trouble throughout the second half though and wasn't as effective in the waning minutes as many Deacs may want him to be. Fischer hit a few three's and ended up with a little bit of everything with 14 points, 3 rebounds, 2 assists, and 2 steals. Rountree again showed his versatility dropping 12 points, an assist, 4 rebounds and a block. Green had a solid second game but fouled out near the end of the game with 13 points and 9 rebounds.

Something which I hesitate to mention because of giving attention to it but must be covered because of its impact on the game, was Chas McFarland's attitude from the Grace, Tisdale, Clifton bench. Chas was not playing in the final but was on the bench since he was on the team. He managed to accrue two technical fouls for talking to the refs and was ejected with a minute left. The final margin was four points and Chase Fischer hit every free throw that came from the technicals Chas picked up. It was an unfortunate way to end an otherwise fun and exciting Summer League. I would encourage future Summer League organizers to exclude Chas because of the black mark that he brings to not only the event, but to the Wake Forest name at large.

Congratulations to Salem Smiles and their 2012 Summer League Title. If there are any questions/concerns/comments, please feel free to include them at the bottom or shoot any of the BSD guys an email. Go Deacs!