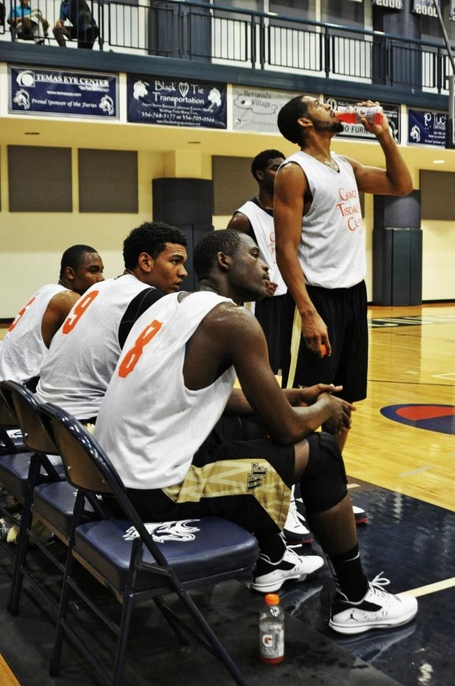 Tonight's games saw a couple of surprises, as the Wake-led team struggled for the most part against the three other teams in the league. The Guilford College team (Triad Commercial Properties) nearly pulled off a huge upset against Travis McKie's team (Modern Nissan) thanks to a heck of a game by Josh Pittman.

The Holcomb-Fayes overcame a slow start to knock off the C.J. Harris led team in a close affair as well.

The third game of the night was a shocker, as SalemSmiles (CMM, Rountree, Fischer, Green) suffered a defeat to Mountain Fried Chicken. This was despite pretty strong games by all of the Wake guys.

Stats and analysis from the Wake guys can be found after the jump, as well as recaps of the game.

Editors Note: Thanks to Robert Reinhard and Stonz for their recaps of games one and three respectively!

Travis McKie's game was shining as bright as his neon shoes on Monday night at Forsyth Country Day. McKie led his team to victory and finished with a game-high 32 points to go along with 7 rebounds and 3 steals. His team was down early, but then he demanded to return into the game, and he immediately took over by finishing a monster dunk in traffic. He never looked back from there. He was showing off his improved perimeter game as well, as he finished with 3 3-pointers, and demonstrated strong ability dribbling the basketball in the open court.

Andre Washington did not have his best game offensively, as he finished with only 7 points and 2 turnovers, but he did grab 6 boards, and had an incredible 7 blocks. Tonight was really the first night he showed outstanding shot-blocking ability, so we will look for that in future games. Madison Jones continues to be a very good rebounder for his size. Tonight he pulled down 6 boards to go along with 6 points and 2 assists. Jones plays scrappy defense, but sometimes that leads to fouls being called-as 4 were called on him in tonight's contest. He moves well without the ball and can find open space on the floor, but he now must knock down the shots once he gets the ball.

In the marquee matchup of the night, the Holcomb-Fayes fought back from an early deficit and defeated the Deacon-laden squad by a final of 63-58.

The hotly contested game (and poorly officiated if I say so myself), saw CJ Harris pour in 20 points, but they could not stop Reyshawn Terry, who was ejected from the game after a technical foul in the second half, but before he went drilled 3 straight threes from the top of the key to open up the second half. Walter Baxley led the H-F's with 21 points.

On the Wake side, Harris finished with the aforementioned 20 points, and also chipped in a couple of assists, two boards, and a steal. Arnaud Moto demonstrated his ability to get to the basket in the first half and wowed the crowd with a couple of strong finishes. He wound up with 9 points and 5 rebounds with two steals. Moto reminds me of Travis McKie in his freshman year in the way that he is a slasher and good rebounder, but needs to work on his jumper and perimeter game.

Devin Thomas had a hard time adjusting to the physical play because he was hampered again by fouls and probably only played about 10 minutes total before succumbing to the five foul limit. He managed to score 4 points, dish out an assist and grab four boards before his disqualification. Devin needs to work on adapting to the game he is in and learn when to let a guy go or just go straight up on defense instead of crashing into the guy. Otherwise he will be extremely foul prone once basketball season starts.

Spencer Jennings once again had a sneaky good night, with no points, but 4 assists and 3 rebounds.

Wykevin Bazemore from WSSU continued his good play in the Pro-Am and had 3 points with 8 rebounds. The Rams star is comfortable on the court and more than holding his own against the Wake players and professionals of the other teams. Michael Grace from Yale also had a strong game with 12 points.

In the final game of the night, the Deacs took a surprising 78-66 loss. Playing against Chas McFarland and the rest of Mountain Fried Chicken, Aaron Rountree, Codi Miller-McIntyre, Chase Fischer, and Daniel Green trailed nearly the entire night. Fischer led the scoring for the Wake players with 19, including four three pointers. He did not attack the rim as much as he had in previous games, although he did hit a runner in the lane and scored on an offensive rebound putback. Miller-McIntyre was the more aggressive backcourt player, repeatedly beating his man on the perimeter but often settling for mid-range jumpers instead of taking the ball all the way to rim. The freshman point guard finished with 16 points and four assists.Throughout the game, CMM combined well with fellow freshman (and cp3 All-Stars alum) Aaron Rountree. The 6'9 swingman had no trouble stuffing the statsheet as usual, compiling nine points, five assists, five rebounds, four steals and two blocks.. Rountree played with his typical intensity, but gambled a bit too much defensively. While Rountree is impossible not to notice on the court, Daniel Green on the other hand compiled an incredibly quiet 13 points and 10 boards. As his offensive game continues to develop, he will need to learn to be more proactive. Right now, he is too comfortable deferring to teammates at the offensive end. At one point, Rountree could be heard telling Green to be more aggressive, and "make a play!"In news that should surprise no one, Chas McFarland was ejected in the middle of the second half due to a technical he received while at the scorer's table questioning a referee. McFarland was vocal throughout the game, mixing comedy with negativity. After a Salem Smiles player missed a free throw badly, Chas shouted to his teammate, "good foul!" He also frequently reminded teammates to leave Rountree open, since he "can't shoot." McFarland did not, however, make a major impact on the court. Josh Nofflet led Mountain Fried Chicken with 30 points.