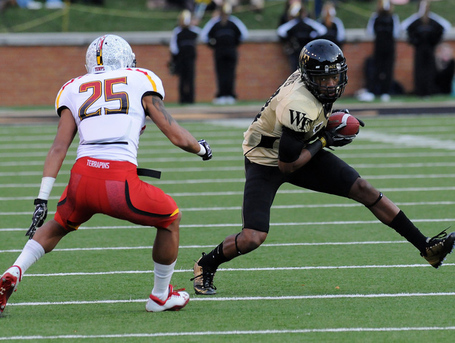 Today is segment three of our two-week analysis of the 2012-13 Wake Forest football roster. The previous two days have dealt with the quarterback and running back situations, so today the discussion will center around those guys catching passes from Tanner Price.

Last season's wide receiver corps was primarily focused around Chris Givens in the slot, Campanaro behind him, and Terence Davis as the big target. This year has many familiar faces as Camp and TD return, but the biggest name in Givens was drafted by the St. Louis Rams.

Click through the jump to read more about the receiving targets for the upcoming football season.

The 2012-13 Wake Forest receiving corps is one of the deepest we've had in quite some time. The number one target in Michael Campanaro, has been named to the pre-season Biletnikoff Watch List and promises to bring an extraordinary amount of talent into the season. Perhaps the biggest name coming into the season behind Camp is Sherman Ragland III, a redshirt Freshman from last season. At 6'2", 195, Ragland has the ability to get downfield from both the slot and the outside position to present himself as a viable threat for Price in the passing game.

Ragland, a graduate of Southern High School in Durham, NC, was one of the fastest runners in the state in 2010, winning the 55-meter hurdles. His ability on both sides of the ball won him a scholarship to Wake Forest as he was recruited by Coach Steve Russ from the Demon Deaons. Ragland is a speedy receiver who will add more depth to the team in the slot position behind Camp than we have had in quite some time. With the return of Camp, a guy who has a knack for getting to the middle of the field on crossing/timing routes from the QB, the receivers have an incredible start for the season. Camp is one of the best returning starters in the ACC and based upon his off-season prowess in the weight room promises to be one of the best Deacons on the gridiron period next season.

Behind the emergence of Ragland and the return of Camp, Price has Terence Davis on the outside to look to for a big target, particularly in the red zone. Last season Davis caught 20 passes for 269 yards and 5 touchdowns. He was primarily an outside receiver who caught passes towards the sideline and on deeper routes. He was one of Price's favorite targets downfield and the focal point of any fade routes thrown towards the corner of the end zone while the Deacs were in the red zone. Davis will continue to provide a consistent downfield, larger threat for the Wake Forest in the upcoming season while Camp and Ragland primarily play a shorter, Chris Givens role in the offense. Ragland is more likely to take off downfield on a fly route than Camp is, but Camp and Ragland both are more likely in general to stay beneath or just at the first down marker for Price to look to on dump off and check down routes as the play breaks apart.

Behind Ragland, Davis, and Camp in the top three receiver positions, sit Matt James, Quan Rucker, and Lovell "Scooby" Jackson. James, at 6'5" 220, promises to be more of a Terence Davis type receiver. He has the height and athletic ability to get down the field from an outside position and catch passes above both corners and safeties. Scooby, a redshirt Senior, is perhaps the most likely guy to come in as a third guy from the slot position. Scooby has primarily returned punts and kickoffs throughout his Wake Forest football career, but has the speed to put on a show and lose the nickelbacks who attempt to guard him as he lines up in the slot.

I would look for Scooby to play a decent amount along with Camp and Ragland in the slot and would look for James to be the primary outside backup for Davis when he needs a breather. If the lineup calls for a big receiver opposite TD when the Deacs are in the red zone then James can do that as well.

Quan Rucker, a resident of Statesville, North Carolina, only caught one pass in the 2011-12 season (against Gardner-Webb). Despite this, Rucker is a bright spot in the Wake Forest receiving corps and will most certainly see some game time in the upcoming season. As a listed flanker, presumably behind Camp and Scooby, he will see some action in the case of injuries or unique five-wide formations.

Rucker has an explosive ability to beat his man off the line and get to the inside of the field to meet sharply thrown passes from the QB, and there is no doubt that he will look to exploit this ability to see some game action for the Deacs this season.

In addition to his ability to get to the middle of the field, there is hope from the coaching staff that he will be able to run some more outside routes and get to the sideline in an attempt to stretch the defense and keep them on their toes. Guys like Rucker are the key to third down conversions as they come in unexpectedly and keep the secondary guessing on what is coming next. I would look for Quan to have a solid season and make some big catches on second and third down to keep drives alive throughout the year.

Remaining wide receivers who will see some-to-minimal playing time include Brandon Terry, Airyn Wilis, and perhaps PJ Howard IV. The main problem with these three guys is that they bring duplicate skills to the gridiron that the starters/backups already possess and may not bring a lot of things otherwise. I do like the various potential that each of these guys bring to the field, particularly Terry's size and athleticism, and Howard's speed. It remains to be seen what each of these guys can do moving forward but for this upcoming season I just don't see them being too much of a factor unless the injury bug jumps up and bites the first and second string contributors.

As far as the tight ends go, it remains to be seen how much the Steed Lobotzke offense will incorporate the big men on the offensive line. For the past couple of years it has appeared that the Deacs had some solid hogs on the outside of the line who could get a few yards down field and make a play, but they never really popped up too much in the offense. If this trend continues I wouldn't be surprised if the offense bucks off the tight ends nearly completely and just throws out an extra wide out into the formation with Price in the shotgun, but one never really knows in the summer/off-season.

If the Deacs do decide to revert back to a consistent tight end formation, there is certainly some potential from Spencer Bishop, a RS-JR, and Neil Basford, a RS-SO. Both guys come in over 230 pounds and have the ability to displace linemen from the point of scrimmage, but the key in the Wake Forest offense is their proclivity to get downfield towards the first down maker and make a catch. From the tight end slot this involves beating a man off the line in many circumstances, getting to the second level where the linebackers are, and catching a pass in traffic. With the current Wake offense though, where the run comes from the singleback and the pass comes from the shotgun, it remains to be seen where and how tight ends will come into play.

Last season's leader in receptions from the tight end position was Cam Ford, who caught a meager 12 passes for 99 yards, but did manage to haul in 3 touchdown receptions. The main key for the Wake Forest tight end is their ability to run a crossing or a short sideline-out route in short yardage/red zone situations. If Basford or Bishop can rise to that challenge, Lobotzke's short yardage plays will reach a different level for the 2012-13 season.

Here's a look at the 2011-12 receiving stats to see what the Deacons are losing/retaining from the previous season:

Campanaro's low touchdown total is likely an aberration, as he will grab a lot of the touchdowns that Givens had last year. Likewise, many of Dembry's catches will go to Davis because has a similar game as the senior who graduated this past year.

Wake Forest's receiving corps last year was one of the best in the ACC and there is no reason to believe that this year will be any different despite the losses that the team had to the draft and graduation. The receiving position is one of the many bright spots of the Demon Deacon football roster this season.