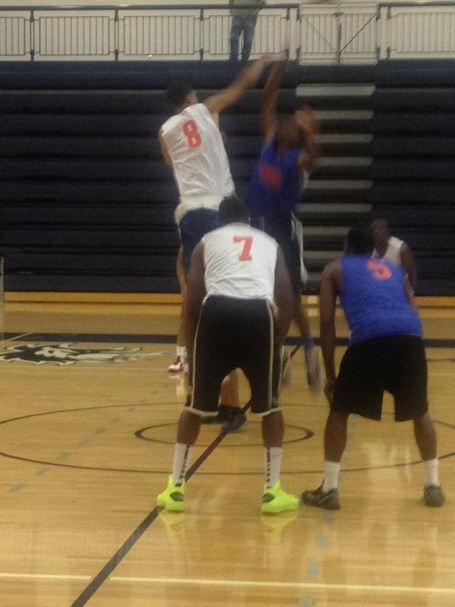 We once again are in the dog days of summer, and while that means no sports that mean anything, we do have the Triad Pro-Am Summer League that features every player on the Wake Forest basketball team. It's never good to look at these games and get too high or too low about anybody, but the games do usually indicate which players have to work on and give a good idea of what a team has to work with come winter.

If tonight is any indication, Wake Forest will be quite pleased with not just its seven-man class, but the rest of the team as well. For the first time in nearly two years, I was actually somewhat encouraged by what I saw on the basketball court, especially in terms of maturity, teamwork and representation of my alma mater.

Nearly every Wake Forest player had a highlight of some sort, and they all played what looked to be very fundamental basketball, which was very pleasing for the Wake fans in attendance.

The marquee game of the night came at 7:30, which saw a Codi Miller-McIntyre and Aaron Rountree led team decimate the "X" time defending champion Holcomb-Fayes 65-43. That game was sandwiched between two other Wake Forest led victories.

Click through the jump for recaps from each game and statistics of all Wake Forest participants.

In the first game of the Pro-Am season, Travis McKie, Andre Washington and Madison Jones led Modern Nissan of Winston Salem to a 90-82 win over Mountain Fried Chicken (Note: Tyler Cavanaugh is on Modern Nissan's roster, but he did not play tonight as he is still recovering from a foot fracture. He is out until at least next Thursday). Modern Nissan led the game nearly wire-to-wire, although the lead was in the single digits for much of the 2nd half.
As expected, McKie dominated in the summer league atmosphere. Travis tallied 14 points in each half and collected five rebounds. He also made a number of hustle plays and seemed to be Modern Automotive's leader. His jump shot looked smooth, and he attacked the glass with his typical intensity.
Somewhat surprisingly, Andre Washington was the second-leading scorer for Modern Automotive. Although Washington took advantage of his height to collect a number of dunks and easy lay-ups, the 7'1 freshman center also showed impressive footwork as he finished a number of plays with good touch around the rim. He finished with 23 points and 11 rebounds. He also proved to be serviceable at the charity stripe, connecting on five of his eight free throw attempts.

Freshman point guard Madison Jones had the quietest game of the three Deacs from a scoring perspective, but he still managed to make a significant impact with his hustle and athleticism. The 6'1 guard collected six rebounds and two steals to go along with his nine points. Jones showed good aggressiveness attacking the basket, but was unable to finish on a number of his drives.

The second game of the night pitted last year's champions, typically called the Holcomb-Fayes, against a team led by sophomores Chase Fischer and Daniel Green coupled with freshmen Aaron Rountree and Codi Miller-McIntyre. The Wake team got out to an early 7-0 lead behind a couple of early baskets by Miller-McIntyre. After this solid start, the team hardly looked back, extending the lead out to 36-19 at the half and cruising to a 65-43 win.

The Holcomb-Faye team lacked the solid inside presence which they have based their tenacious zone defense around in past years, and struggled to get the ball through the basket. Green and Rountree posed problems all night inside, as each player recorded multiple blocks and managed to swat former Deacon David Weaver at least once apiece.

The intensity that the Wake team brought into this game will be difficult for other teams to match moving forward if they can keep up their stellar play. After the first night of play, this team is definitely one of -- if not the best -- teams in the summer league.

Chase Fischer: Fischer had a quiet night in the first half, primarily staying around the perimeter and stretching the defense out with his outside threat. One aspect of Fischer's game which was a point of criticism for Deacon fans last year was his inability to get down the lane with any consistency, and this is clearly an area which he focused on during the off-season. On multiple occasions Fischer looked to take an on-ball screen and penetrate down the middle, and managed to record a few baskets from inside the paint by getting his shot off. He struggled a little bit from outside but made a great play in the first half by getting a defender in the air and drawing three shots at the free throw line. Fischer showed good improvement from this point last year and finished the night with 16 points, 3 rebounds, and 3 assists.

Daniel Green: Green was one of the most impressive players of the night. First and foremost he has put on 15 to 20 pounds and looks to weigh around 220 pounds. The biggest criticism of Green last year was undoubtedly his strength inside and his wiry frame. Green definitely hit the weight room during the summer, and it showed. Even more impressive than gaining strength was how athletic he appeared on the floor with the added weight. A lot of guys will put on a few pounds and will look sluggish after the fact. This was not the case with Green, who crashed the boards with great intensity.

A solid point which all Wake fans will love is he never hesitated to throw the ball down with authority rather than trying to lay the ball in. He can still use some work on his back to the basket game and ensuring he has good position off the ball before he calls for it, but Green has made real strides in the off-season which should make Wake fans believe that he will compete for serious minutes on this basketball team next year. He finished the night with a double-double, 15 points and 11 rebounds.

Codi Miller-McIntyre: CMM got the game started off right with a quick five points in the first minute, including an impressive fadeaway three with a hand right in his face. The first thing to note about CMM is that he is absolutely jacked. He stands at 6'4 and has a considerable amount of muscle on his body. His strength coupled with his length make for a tenacious defender, and Codi was constantly all over his man aggressively. This was something which I thought was a theme of the night with most guys, the intensity and defense were hands down the best part of the first slate of games in the summer league.

CMM has a sweet stroke with his jumper and as he becomes more confident with himself and his surroundings, I would expect him to get down the lane more easily than he did tonight. He seemed tentative at times to drive into trouble and was more conservative on the offensive end than many Wake fans would like him to be. This was his first game of the summer league, though, and we'll get a better read on his offensive skill set as the league progresses.

I was happy with what I saw from Codi tonight, he's going to be a fantastic player on both sides of the ball for the Deacons. Codi finished the night with 12 points, three assists and one board.

Aaron Rountree: I saved the best of the night for last. To say that I was impressed with Rountree's game would not do justice to how I felt. I'll start with his stats first to give the depth of his game: nine points, two assists, five rebounds, four steals and (at least, it was tough to tell on some group blocks) two blocks.

The best part of Rountree's game right now, not just for his height, but period, is his passing vision. Rountree set up on the high post towards the top of the key on several possessions and would hit cutters from the wing with pinpoint accuracy. He has the ability to get his man up on him and then zip the ball to the basket to a cutting guard or a big man sitting on the low block. This is something that Wake has missed for the past few years.

Good teams have athletic and long players who can stretch the defense out, guys you have to guard to prevent them from hurting you on their own shot and can distribute the ball to the rest of the team. Rountree is this guy for Wake. I've seen him play on several occasions and each time have come away more and more impressed with this Bzdelik signing.

He will need to put on some more muscle, but he has the frame to do so. Additionally his jumper can use some work, but like I said there are plenty more games to increase the sample size from what we saw tonight. I also enjoyed Rountree's swagger. He's a humble young man, but he has that aggression and confidence on the basketball court which it takes to be an elite player. I am very excited to see Rountree's progression as a player at Wake over the next few years.

While Guilford College put up a better game than most people in attendance expected, the Wake Forest-led squad managed to pull out a 75-68 victory.

C.J Harris led the way for Grace, Tisdale and Clifton with 20 points, two assists and a rebound. He got a lot of help from freshman teammates Arnaud Moto (18 points and two rebounds) and Devin Thomas (10 points and eight rebounds).

Spencer Jennings finished the night with three points and a couple of rebounds.

Guilford College was led by Ben Strong (a former D3 All-American at Guilford College) and Zeb Richardson (who played with the Los Angeles Lakers last summer) to make the game a little closer than I would have expected.

As for the Wake guys, C.J Harris displayed exactly what made him a third team All-ACC member last year. He has added a little more muscle to his frame and was content on getting into the lane and wreaking havoc. He hit several threes and got to the line at will against the big men of Guilford College. Harris will be a great leader for us this year and was the coach for his team for the night.

Arnauld Moto showed a powerful game as well, reliant on getting to the rim and cleaning up around it too. He settled for his jumper a little too much and struggled early on, but he got into his flow, found his way to the free throw line and got some easy finishes at the basket. I was impressed by his size for a presumed 3-man, especially as a freshman.

Devin Thomas, one of the most anticipated freshman in this class, did exactly what most around here want him to do. Defend the rim, rebound the ball and finish strong. He shows great prowess on the boards, and while he can continue to work on his technique, the hunger to win and fire in his game is definitely there. He led his team with eight rebounds, and it felt like he got his fingertips on at least 3-4 more that could have added to his total.