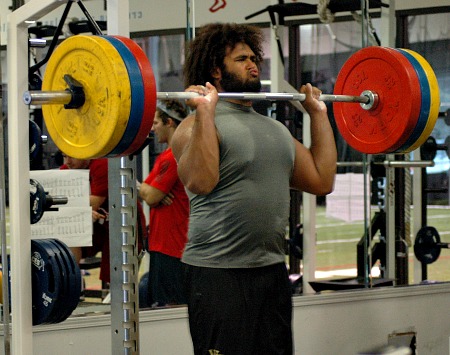 The third of the three Deacs drafted in Round 4 was G Joe Looney. Joe went 22nd in the round, 117th overall, to the San Francisco 49ers. Interestingly, Joe seems to be a more highly touted pick than Wilber according to NFL.com's coverage, despite being drafted later. Joe has a good shot of making some noise, especially in a situation like offensive line where rotations and substitutions are so frequent.

Read more about the scouting report after the jump...

Looney is a strong interior lineman who has been consistent for the Demon Deacons since stepping on campus. He is an athletic mover who blocks well in the run game and has great size. He has fourth-round value based on his production and ability to be inserted right away.

Looney is quick off the ball to get into D-linemen and get movement. He displays good technique in his sets and is very polished when using his hands. He can get upfield to hit linebackers and is effective when pulling or sealing the edge. He has been a reliable and durable interior guy at Wake Forest, and the go-to man to run behind throughout his career.

Looney can struggle in his pass set at times. He has the feet to get there but will get aggressive and lose his balance on blockers. He can work to sit in his base better and be more effective here at the next level, but needs a good coach.

I definitely agree with that projection; I think Joe will battle for minutes but will ultimately be a backup. Still, as I've said, in a situation like the Offensive Line where injuries, rotations, and substitutions are incredibly frequent, there are far worse prospects to have. That, and you'd be hard-pressed to find a much better coach in the league right now than the one he's got, at least among the younger coaches in the league.

I actually knew Joe personally during my time at Wake, so this is particularly exciting to me. Best of luck, Joe. Maybe you'll get a ring within the next few years, who knows?