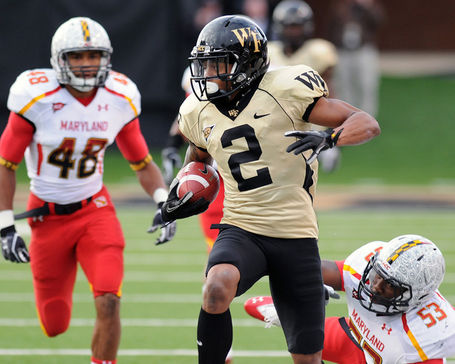 Well guys, wonder no more! Three of the Demon Deacon Football family will all have chances to show their stuff at the next level. There will be a short piece on each of them, but we'll go one at a time. WR Chris Givens, the most highly touted of the Deacs this year by far, went with the first pick of the day, Pick 96 (#1 in round 4) to the St. Louis Rams.

We had our video scouting report on Givens earlier this week, and while he slipped about a round further than expected, he can come in right away and help a St. Louis Rams team that is desperate for receivers.

After the jump, I'll talk a bit about Givens' scouting report, what the destination means for his career, and how he could end up being a real steal for the Rams.

Givens is an early entry junior out of Wake Forest, where he was a first-team All-ACC selection this past year. He has adequate size and is a blazing straight-line runner who looks similar to Philadelphia's Jeremy Maclin with his movements in-route. He relies heavily on his speed in everything he does. He's capable of taking a speed-out and cutting upfield to daylight. He is a polished player who could be selected late in the first round; he has all the traits of a productive NFL receiver and an immediate No. 2 option.

Givens is an elite deep-threat receiver who is fluid and quick off the ball. He can eat up a defensive back's cushion in a few steps to get them on their heels and then accelerate in a very controlled, explosive motion. He adjusts well to balls in front or behind him, and he can make all the necessary catches at full speed. Givens has obvious field awareness and routinely would get behind corners in Cover 2 before throttling down for a quick back-shoulder throw before a safety can get there. He can get jammed at the line on occasion but usually beats defenders with a jab step. He has excellent footwork at full speed to change directions or drag his feet along the sideline.

Givens can get jammed at the line of scrimmage when he doesn't ignite a quick jab step or if an explosive corner quickly gets in his face. He often looks over his shoulder and gets alligator arms going across the middle. He is a tough player but far from physical. Givens gives little effort as a blocker in the run game and is only capable of being a decoy or running off his man.

I'd say this take is pretty accurate on all counts. NFL.com's analysis of Givens as a genuine No. 2 option and deep threat is spot-on. I'm excited for Chris ending up in St. Louis, as this means he'll have a quality young QB tossing him the ball.

Congratulations to Chris, all the best in his career, and I have faith that we'll see him plenty on Sundays. You'll always be a Deac, Chris. Get it.