Share All sharing options for: Q&A With Testudo Times 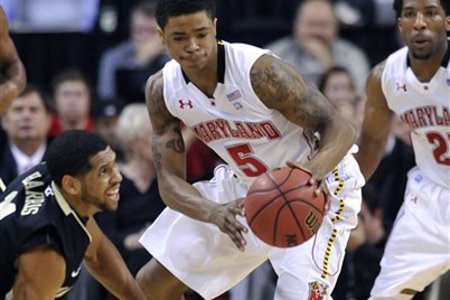 Leading up to the opening game of the ACC Tournament we got together with Testudo Times and were lucky enough to banter about the matchup between the Wake Forest Demon Deacons and the Maryland Terrapins, which will tip off at noon tomorrow in Philips Arena in Atlanta. Discussion includes how both teams will respond after limping home down the stretch, what kind of defense we can expect to see, and ultimately who will come out on top in this contest to see who gets a shot at top-seeded UNC on Friday.

Click through to get the full Q&A with Testudo Times

Blogger So Dear: In the first game this year Maryland had just gotten Howard and Len back into the lineup. How much of a difference will they make in this game without Ty Walker in there to swat everything that comes down the lane? I can't believe I'm asking how Walker being gone will be an impact, but I am.

Testudo Times: Well, Howard's back out, hurt with another leg problem and Len has actually regressed since early in the ACC season. He's really struggled with the height and athleticism in the ACC, and I don't think he was ready to make that leap right away without getting in minutes against lower-quality teams to build up his confidence. Walker was an absolute menace last time -- single-handedly responsible for a 5 percent drop in Maryland's FG percentage if you're willing to use brute math -- and the vast majority of those blocks came on Maryland's post players down low. Those aren't gimme shots for the Terrapins anyway, but they're ones that should be going in, and I expect they will this time.

BSD: Who will Maryland look to if Stoglin continues to be relatively quiet? Maryland obviously has more depth than the Deacs and will have more options to turn to, but who will turn it on when the going gets tough?

TT: That's the $64,000 question if you're Maryland. The answer changes night-to-night, and Mark Turgeon really needs someone to step up and be the answer game-in and game-out. It's been James Padgett in the past, but he's primarily a garbageman who'll clean up other people's messes. That's not a bad job, but a good defensive rebounding team can crowd him out. Then other times it's Sean Mosley, a canny senior who has a really underrated mid-range game and plays smart, but has a tendency to disappear in the big moments. The Virginia comeback ran through him, but when push came to shove in the closing minutes he ended up deferring to Stoglin, and Maryland of course lost. Most recently it's been Nick Faust, and he's the best long-term stock of the bunch. Very athletic, very confident, and a terror slashing to the hoop, Faust has slowly been finding his rhythm and developing an outside shot. His jumper is ugly as sin but has been going in as of late. If he can consistently give Maryland double-digits in points, they're a much better team.

BSD: Will the Terps play any zone or will they primarily be sitting back in man? Wake has been playing a lot more zone lately and it's helped but we're still giving up tons of uncontested threes. Who is going to make the Deacs pay when we sag on defense?

TT: Turgeon has gone to zone maybe 20 minutes all season. He's a man-to-man lifer (something I love) and sticks to his guns on it all day long. There will be very, very little zone. If there's any at all, in fact, I'll be a little surprised.

As for Maryland's outside shooters: well Stoglin is obviously dangerous, but he needs to rework his game to be more deadly off the ball than on it. He's a catch-and-shoot nightmare but so often looks to take it off the bounce instead, and that will kill him against a zone look. Sean Mosley and Nick Faust can both hit open threes. I'd let Mosley shoot 'em all day long, but I have to say that every time Faust pulls up for a jumper my heart jumps to my throat. His shot just doesn't look like it should be going in.

BSD: Aside from the Maryland-Wake game what game are you most looking forward to on Day 1 of the ACC tournament?

TT: It's four not-at-all-appetizing games in the first round, but forced to choose I'd probably say Miami-Georgia Tech. The Jackets seem like they've been showing some life lately, and Miami's fighting for its life on the bubble. It's the only one with real NCAAT implications and so probably the only one that should have a lot of emotion.

BSD: Prediction time: who wins and by how much? The Terps are around a five point favorite on KenPom, but I actually think Maryland wins by more than that. How will Maryland respond to the loss against UVA? It was a tough one but will the Terps come out on fire or will they be rusty after losing a tough one to the Cavs?

TT: I do think Maryland just barely edges it, probably by around four points or so (but the margin is sort of irrelevant when predicting a close game), but I'll say that I have absolutely no confidence. They've looked absolutely beat in the past few games, and while the close loss to UVA probably looked okay from a box score perspective, they were almost run out of the building in the first half. If it wasn't for Mark Turgeon freaking out coming out of the break -- I mean that literally: he was pushing around his assistants and everything -- that game isn't close. That said, I do think that the break might've helped them. They've played one game in the last week, and for a team that was on its last legs that has to help out a bit. That said, I wouldn't be the least bit surprised to see the Deacs win it, even handily. Maryland has really lacked fight recently.

Thanks as always goes out to Testudo Times, a great collaborator here on the SBNation network. BSD also sat down with Testudo and answered some questions, which will be up on their site tomorrow morning and linked over here as soon as the questions are posted. As always, go Deacs!