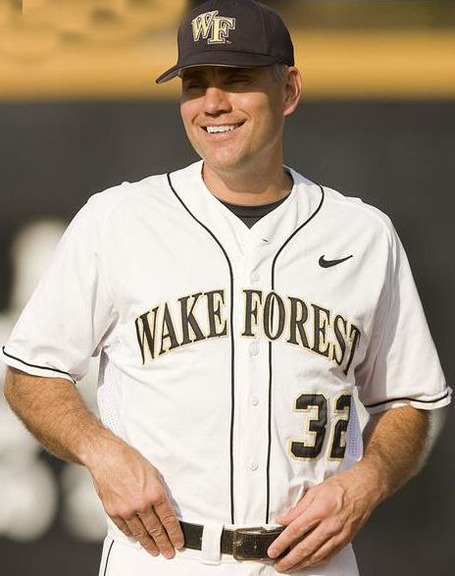 The Wake Forest Demon Deacon baseball team is off to a solid start with a 5-4 record on the year. The Diamond Deacs are currently riding a four-game winning streak and are fresh off a sweep of three different opponents in the Wake Forest Invitational. The best of these wins was over the Georgetown Hoyas, who entered the game 6-1 on the year. Behind starter Brian Holmes, the Deacs were able to shut down the potent Georgetown offense to snag a 5-2 victory.

Following this win to conclude the Invitational, Wake returned to action on Tuesday and came away with a 9-8 victory on a home run from RS Junior Mac Williamson in the sixth inning. This is the third year under head coach Tom Walter and is the first time in a few years that the Deacs have a legitimate shot at making some noise in the conference and making a run at a regional invite to the NCAA tournament come June.

During Tom Walter's first year at Wake Forest, the Demon Deacons struggled in a lot of areas. The team appeared to lack fundamentals left over from the tail end of the Rembielak era. The Deacons have not made the NCAA tournament since 2007 when the team advanced to the Championship game of the ACC tournament, ultimately falling at the hands of the North Carolina Tar Heels by a 1-0 margin. Year two under Walter revealed that the team was steadily improving and was on the right track, underscored by focus in the field, bat discipline and in the classroom.

This year's version of the Diamond Deacs got off to a rough start with a season opening trip to Las Cruces, New Mexico to take on New Mexico State. At face value this appeared to be a relatively odd place to take a road trip, but it has an emotional back story. Walter was the head coach at New Orleans when Hurricane Katrina hit and the team was displaced with nowhere to practice tor even anywhere to attend school. New Mexico State kindly extended an offer for the team to come practice and train in Las Cruces, and the bond still remains for Walter and the Aggie community. In addition to this connection, the weather in New Mexico is an ideal location for early season baseball games to ensure the games are played since it's a relatively warm, dry and arid climate.

Despite getting good pitching efforts in the first three starts, the Deacs were unable to get the bats going falling 5-3 in the season opener, rebounding for an 8-5 win in game two, and losing 3-1 in game three. Game four of the series was markedly different as both teams got off to fast and hot starts, but the Aggies ultimately outlasted the Deacs 13-9 to grab the series and get off to a 3-1 start.

While the series was not exactly what the Deacs had in mind, New Mexico State presented quite a road challenge for Wake as they were the best hitting team in the nation last year. The Aggies also boast the preseason WAC player of the year in junior catcher Zac Fisher. The pitching staff actually did a good job of shutting Fisher down as he hit a cold 3-15 on the series, but the Aggies did enough at the plate around Fisher to ensure that they won the series.

The Deacons then returned home to sweep three games against UMBC, Cincinnati, and Georgetown to get their record back up to .500 on the year at 4-4.

"I told the team after (the Georgetown game), hopefully today is the last day ever under .500 so obviously the goal is to get back to .500 quickly when you get under it. It starts with pitching, and we got good efforts this weekend from Van Grouw, Cooney, and Holmes," said Coach Tom Walte.

Walter's prognostication held water when the Deacs jumped out to a solid 8-3 start against the UNC-Asheville Bulldogs before conceding five runs in the fifth inning to knot things up at 8. Williamson's sixth inning home run broke the tie and the Deacs held on at the end of the game to secure the victory.

The Deacons have had several bright spots so far on the year, underscored primarily by the emergence of three solid starters at the forefront of the starting rotation: Tim Cooney (1-1, 1.42 ERA), Justin Van Grouw (1-1, 2.92 ERA) and Brian Holmes (2-0, 0.00 ERA).

The Deacons bats came alive over the recent home series and were sparked by several good hitters at the top of the lineup. The key for Wake going forward will be finding consistency at the back end of the lineup for when the conference season arrives. Key hitters include SS Pat Blair, OF Mac Williamson, 1B Carlos Lopez, and 2B Conor Keniry who has really emerged as a surprise early in the year.
Hitting Highlights
Upcoming Schedule
March 2: Eastern Michigan 4 P.M., WFBB (Van Grouw, 1-1, 2.92 ERA)
March 3: Marshall 4 P.M., WFBB (Cooney, 1-1, 1.42 ERA)
March 4: Eastern Michigan 12 P.M., WFBB (TBA); Marshall 4 P.M., WFBB (Holmes, 2-0, 0.00 ERA)
March 6: Valparaiso 4 P.M., WFBB
March 7: Valparaiso 4 P.M., WFBB
The Deacons will start conference play a week from today as an upstart Maryland team under third year head coach Erik Bakich has the Terps at 20th in the nation. Maryland was picked to finish 5th in the Atlantic Division prior to the season by the coaches, Wake was picked to finish 4th in the division.
There will be more updates coming as the season progresses, as well as some quotes from Coach Walter, some of the players, and thoughts and prognostications looking forward to the ACC season and NCAA tournament as a whole. For right now, the Deacs needs to focus on winning these early season out of conference games, something they have struggled with over the past few years, and try to get some wins under their belt to get momentum going heading into the conference season.
The ACC looks to be one of the best conferences in baseball once again this year and Wake will need to compete on both sides of the ball in order to make a run as the season continues.