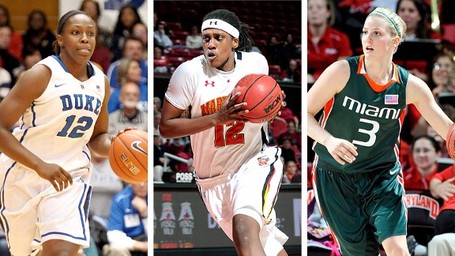 It wasn't as pretty for Wake Forest fans as the 68-39 beatdown was last Sunday at the Joel, but the 80-74 victory is just as sweet because it comes in the first round of the ACC Tournament. The game last night was a must win for the Deacs if they wanted to have a final shot or two at getting into the discussion for the NCAA Tournament. They took care of business against an over-matched and undermanned Virginia Tech team.

The Deacs will now get a shot to get that marquee win that could get them into the NCAAT tonight as they take on the No. 2 (and No. 7 nationally ranked) Miami Hurricanes at 6:00 in the Greensboro Coliseum.

The favorites all held serve except that N.C. State pulled a minor "upset" in the 8/9 game, 74-71. Continue through the jump to take a look at the updated bracket, more on the Wake game and a look-ahead to the games today (especially the Wake-Miami game.

As for more on the game last night, the Deacs were led by the three-headed monsters of Lakevia Boykin, Chelsea Douglas and Secily Ray. The three combined for 60 of the teams 80 points and hit big shot after big shot to hold off an extremely resilient Virginia Tech team.

Boykin came alive early and scored 12 of the teams first 15 points. Ray also did an exceptional job of getting the ball to basket and taking the fouls that came with it.

Despite the Deacs getting out to an early 19-11 lead, the hard-working Monet Tellier, who would set the Virginia Tech ACC Tournament scoring record with 23 points, hit a couple of three-pointers to pull the game to 21-19.

Wake went into the half with a 36-35 after another mini-run by the Hokies to cut into the Deacs lead. At the half, Wake Forest Head Coach Mike Petersen told the team to just get the ball to the basket a little more and that is exactly what they did coming out of the break. Ray once again took the ball to the basket hard and made the foul shots to stretch the lead out a little.

Once again, the Hokies did an excellent job of coming back despite playing a seven woman rotation against the Deacs 10-11 deep bench. They tied the game at 47, but the energy expended during the run proved to be too much as the Deacs rode the hot hand of Chelsea Douglas to counter-punch with a 14-2 run that put the game out of reach at 61-49.

The Hokies would make a few late threes and get some easy baskets on the offensive glass, but Wake Forest proved too much from the line by going 24-30.

The final score finished at 80-74 in a unique matchup that featured the first ever meeting of two male head coaches in the ACC Tournament.

Although the Thursday sessions only saw one really close game in Florida State-N.C. State, I would expect Friday to be the exact opposite. We have a rivalry game in Maryland-UVA, a must-win situation for the Deacs if they want to make the NCAA Tournament, and really the same situation for N.C. State vs. Duke at 3:00 p.m.

The best game of the day very well could be the first one though. Georgia Tech vs. UNC is a battle of two teams that in nearly any other conference would feature the No. 1 vs. No. 2. Fortunately in the ACC, this is the 4/5 matchup so we get treated to other superb basketball teams as well.

Georgia Tech won the only meeting this year between the two teams on Feb. 12, 56-54, in Chapel Hill. The Yellow Jackets have not lost since they dropped the previous game vs. Maryland, 64-56. They are ranked No. 18 in the country and are playing for NCAA Tournament seeding at this point.

UNC is likely safely in the tournament since they didn't drop another one to Clemson yesterday, but a win against Georgia Tech today would punch their ticket in the Big Dance.

In the second game of the day, the No.1 Duke Blue Devils take the court against the No. 9 N.C. State Wolfpack. It's a win or go home situation for N.C. State because the NIT at this point is up in the air with their 17-14 record overall.

The Pack will need a big day from the duo of Holston and Burke if they want to compete with phenom freshman Elizabeth Williams and Chelsea Gray.

Duke rolled in the season's only matchup on Jan. 8 in Cameron vs. the Wolfpack, 83-59, and I really don't expect today to be any different.

In the 6:00 p.m. game, the Deacs will take on the No. 2 seed Miami Hurricanes. Coach Mike Petersen said earlier in the week that if we can win against VT and Miami, then he doesn't see how the NCAA Tournament committee can exclude us. I may not agree with that 100 percent, but I know that if the Deacs don't win tonight then there is no chance to make it.

This is no easy task for Wake Forest because they will be going up against All-American Shenise Johnson and a Miami team that walloped the Deacs in Coral Gables on Jan. 26 64-39.

Miami has four losses all year and they were all against top 25 teams at the time the games were played (Duke, UNC, Georgetown and Tennessee). This will be a tough one for the Deacs, and while I am hopeful that we will play over our head, I think this one will be a difficult one to pull out.

For the final game of the night, the last team in the tournament to make an appearance will finally get their chance. The No. 3 seed Maryland Terrapins will take on the No. 6 Virginia Cavaliers, who dismantled Boston College in the late game last night.

Virginia is looking to bolster its NCAA Tournament resume as well. They should safely be in with a 22-9 record, but tonight would lock them in and give them a chance at a reasonable seed as well.

Maryland defeated UVA both times they played this year by scores of 68-61 in College park (Jan. 16) and 73-56 in Charlottesville (Feb. 16). I don't know why, but I have a feeling that UVA might pull the upset tonight. They are clicking at the right time of the year and play very solid basketball.

Well, there is pretty much everything as it stands for the ACC Tournament and Wake Forest. There are four great games on tap for today and a big chance for the Deacs to state their case for a second NCAA Tournament berth in school history.

All the games are on ESPN3/RSN, so there is really no excuse for not at least watching. If you live in the Triad please, please, please get out to the Coliseum and support the Deacs tonight at 6:00. It's a great Friday night activity for the kids and family, and Wake deserves the support with the way they have played this year.

Live updates and chats will be held on here for the Wake game (and bits and pieces of the others), so if you absolutely cannot make it to the game then come hang out with us hear and chat while watching the game at home!