Share All sharing options for: NCAA Tournament 2012: My Yahoo! Bracket, Complete With Upsets, Picks And Predictions

Everybody ready to shamefully ridicule me publicly for my bad picks in the NCAA Tournament? Yeah, me too. That's why I'm going to be revealing my predictions, my upset specials and my Final Four from top to bottom. This was a hard year for me, as I usually like to step out of the box and pick teams based on (a) potential matchups, (b) to avoid mass predictions and hopefully catch lightning in a bottle, and (c) placing particular credence on whether or not I "trust" the head coach.

This year, I bucked the trend and am trying something different. Higher seeds rule my bracket, and I actually stopped myself from my usual biases (never pick Big East teams, never pick Ohio State, always pick Izzo). I have a couple big upsets still, including one surprise Final Four team, that will still be enough to differentiate myself, but for the most part, I'm taking solid teams with good players that have been consistent all year. Seems crazy enough to work.

After the jump, I'll include my full bracket with a breakdown of my reasoning, and don't forget to join the BSD Bracket Challenge ... 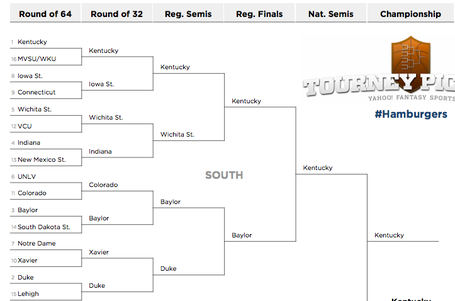 Let's get this out of the way right now. I don't want to pick Kentucky. I don't like picking Kentucky. I try every year not to do it, and usually it works out pretty well. This year, I just can't. They're the best team in the tournament, they have a ton of extremely talented players, a nice mixture of youth and experience, they're a better jump-shooting team than in the past, this could be Cal's last year (some reports are indicating he will leave to take the Washington Wizards job after this season), and I'm all aboard the Michael Kidd-Gilchrist and Anthony Davis train. This is the easiest bracket for a No. 1 seed, by far, and I don't see Kentucky being challenged until at least the Elite Eight.

I'm torn on Iowa State-UConn, but I'm not agonizing over it. The Cyclones have Royce White, and I want to root for them against a dysfunctional, underachieving Huskies team. If UConn beats Iowa State and somehow beats Kentucky, too, at least my bracket is finished, and I can watch the rest of the games in peace.

Xavier-Notre Dame is a battle of two teams that I just don't trust even a little bit, and that's lucky for Duke, who can use all the help they can get, as they were poised for an early exit too with their shaky interior play out of the Plumlees down the stretch and Ryan Kelly hobbled.

Baylor is still Baylor, and despite having a variety of scoring options and almost as much athleticism as Kentucky, could fall to the winner of the UNLV/Colorado matchup, but I don't see it happening. I'm playing it safe there.

I'm penciling the winner of the Wichita State/VCU game into the Sweet Sixteen regardless. Indiana is a good team, but the Verdell Jones III injury is a killer for this team, and I feel like both the Shockers and Rams would be able to exploit the Hoosiers regardless. I just feel that Wichita State is a more complete team than VCU, although it hurts picking against Shaka.

Kentucky-Baylor has the chance to be a really fun game, but never pick a team that does the same thing as the team it is playing against -- but not as well -- and that's fully in play here. UK moves onto the Final Four out of the South. 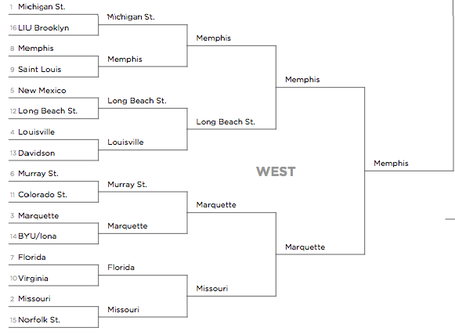 This is my biggest risk, and apparently others are on board as well, including Nick Fasulo of Searching For Billy Edelin. I know Michigan State is a good basketball team. They rightfully earned a No. 1 seed this year, but they've looked vulnerable at times, Branden Dawson is out for the postseason, and a lot of teams pose problems for the Spartans. Every year, I tell myself, take Izzo's guys a round further than you want to, and it usually works, but this year, I don't want to take them any further than round two.

I think Memphis is a terrific basketball team. Josh Pastner is a rising star among head coaches, the Tigers finished top 10 in the KenPom ratings and are rightfully irked at receiving an eight seed for their troubles. The team finishes around the hoop, plays extremely hard on defense and has one of the best players in the country in Will Barton. If there's any weakness for Memphis, it's that they don't grab a ton of offensive rebounds.

Now, getting out of a dogfight against Saint Louis is not going to be easy. I'm really afraid of this game. My bracket is officially busted if Memphis loses in the first round, and it's a definite possibility -- the Billikens are also top 20 in the Pomeroy ratings -- but I trust the Tigers this year. I shouldn't, but I do.

There are a couple other wacky risks I am taking, most notably, believing in Marquette. While the Golden Eagles looked extremely shaky in the Big East Tournament loss to Louisville, they are another complete team, and stand a chance at beating Missouri as long as they can make it past an extremely competitive Murray State Racers' team that beat Memphis earlier this season.

This year is not the year to take Davidson. While I completely respect Bob McKillop, Louisville should be able to make it through. But, I'm rolling on Long Beach (Death Row is the label that pays me) even though the Cards beat them once this year. I just have a gut feeling on this one.

Look, I like Missouri too. A lot. But so does everyone else; that's why I'm worried. They're an offensive dynamo, but something doesn't feel right. Instinct is telling me to steer clear of the Tigers. They'll have no trouble with the winner of the Florida-Virginia game (and that winner should be Florida -- UVA is just too beat up right now to do any damage, even against against the lethargic Gators), and have at least second weekend written all over them.

Again, this is my crazy region, and if all works out, I look like a genius. Otherwise, I can get out the red pen and mark a giant X early on and worry about everything else. Go Memphis. 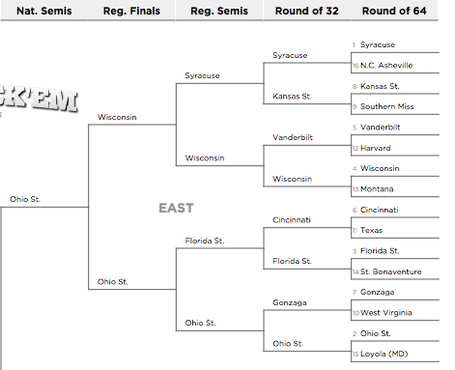 This is my boring region. I have the top four seeds moving into the Sweet Sixteen, and I don't feel confident about any of the four, but don't believe in any of the other seeds either. Gonzaga and West Virginia is a wash, Kansas State is a team I really like, but they're not going to beat Syracuse, the Vanderbilt-Harvard game will be a good one, and I liked Harvard as a trendy pick to make a run earlier in the year, but the Commodores will give the Crimson fits.

There is a chance Vandy could upend Wisconsin, making it easier for Syracuse to get to the Elite Eight, and it wouldn't surprise me, but I gotta trust Bo Ryan here. The Badgers play terrific defense and take care of the basketball, plus they rebound it well on the defensive end. I like them to be the ones to finally knock out 'Cuse.

Let's get this out of the way: I hate Ohio State. I do. It's a bias that shows through from me on a daily basis. That's why picking them was so hard, but I think they're being a bit overlooked in some places. They have a complete team between Jared Sullinger, William Buford, Deshaun Thomas and Aaron Craft and the Buckeyes are looking to avenge a Sweet Sixteen loss from a year ago.

It hurts me to make that pick, but it's a smart one. This team with a win or two more during the regular season could have made the case for the No. 1 seed in this region, and unless Florida State plays a perfect game (which includes hitting shots against an even better defense team statistically than the Seminoles are), the Bucks can move on. 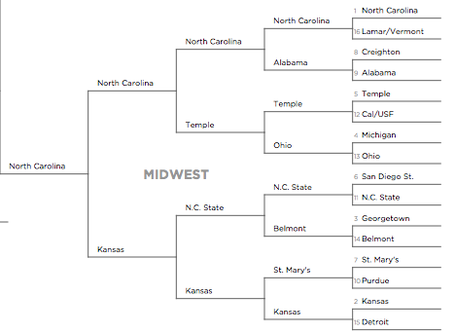 Here's where my first round upsets come into play. I'm not just picking them for fun, either, I truly believe N.C. State, Belmont and Ohio stand a good chance at winning these games. I don't believe in San Diego State even a little bit, and the computer numbers back that up. While the Wolfpack were the 68th team announced out of 68 in the field, they did just enough to get in, and all year with their size and athleticism, they posed a threat in March. It was just a question of whether or not Mark Gottfried would get them enough wins to get them in.

Belmont has come close a couple times in March and hasn't been able to finish the job. What better remedy than everyone's favorite major conference team that struggles in the tournament: Georgetown. While I respect what JTIII has been able to do defensively with his team, I think Belmont's offense can still find ways to score, and the Hoyas aren't good enough offensively to bulldoze the Bruins. And if Georgetown can win, I'm not super worried about it, as I think NCSU has enough firepower (if people can stay out of foul trouble) to move on anyway.

The Bobcats are my other big upset in this region. Michigan is a good team, don't get me wrong, and John Beilein has made my life miserable enough in the past. But, I'm a John Groce disciple. He gets the most out of his guys, he has an experienced team that is still young (and will return all of its major contributors next year), he's already done it once by beating Georgetown two years ago, and he's familiar with how the Big Ten plays (as a former Thad Matta assistant). This Ohio University team is ferocious on defense and won 27 games this year. They are not to be taken lightly.

Other than that, I think Kansas is a very good basketball team, but North Carolina is even better, and the Tar Heels will move onto New Orleans. 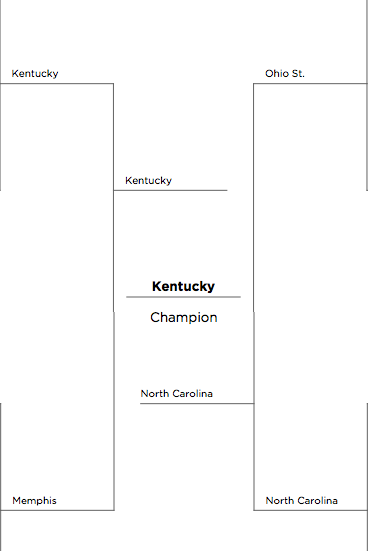 I've thought that Kentucky and North Carolina were the two best teams for March all year long. As long as John Henson is back, and he should be by the second round, the Tar Heels have one of the best point guards in the nation and the best front court. Plus, Harrison Barnes is likely playing his last college games, and we might finally see him care a little bit (which has been a rare occurrence this season). UNC has the horses to beat Ohio State, and I'm really excited about that potential matchup.

I think a Memphis-UK game would be a lot of fun from a storyline perspective, as well. Cal's former team and his protegé in what could be his last game at the Kentucky helm for a chance to play UNC in a rematch of one of college basketball's best games this year.

If things shape up that way, I'll be really happy and this will be an unbelievable month. If not, that's because some other crazy stuff happened, and March was March.

Either way, I'm just happy to be along for the ride once again.

Yahoo! Tourney Pick'em supports SBNation and the best college sports tournament of the year. Join the bracket pools of Drew Brees, Michael Phelps and Lil Wayne -- all while competing in the $5 million Perfect Bracket and $10,000 Best Bracket Sweepstakes. Be part of the best and biggest Yahoo! Sports tourney game yet – sign up today!