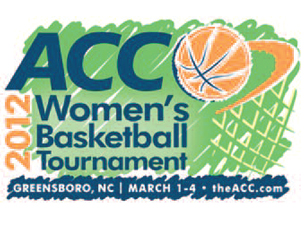 Today kicks off the 2012 ACC Women's Basketball Tournament in Greensboro, NC. The format is the exact same as the men's tournament that will take place next weekend in Atlanta, GA and that means four games today and four games tomorrow.

The No.7 Wake Forest Demon Deacons will take the floor tonight against familiar foe No. 10 Virginia Tech at 6:00. The Deacs dismantled the Hokies 68-39 on Sunday afternoon. Before that game though there are two games this afternoon featuring No.5 seed UNC vs. No. 12 seed Clemson at 11, and No. 8 seed Florida State vs. the No. 9 seed N.C. State Wolfpack at 3.

After the Wake-VT game, No.6 seed Virginia will take on No. 11 seed Boston College. Here are the match-ups for the weekend in its entirety after the jump, along with analysis of the tournament.

As you can tell, all of the games today are on RSN (Regional Sports Network), which is (I believe) Channel 46 on campus. That means that there is no excuse for not watching the Deacs play tonight at 6 p. m.

The 2012 ACC Tournament will likely be one to remember with the top four seeds all in the top 20 of the country. The Duke Blue Devils are looking to win their third consecutive ACC Championship and have put themselves in a great position to do so with the No. 1 seed.

The first game of the day should be better than some people may think, as Clemson knocked off UNC in Chapel Hill earlier this year by a score of 52-47. The Tar Heels have been on a bit of a slide as of late and find themselves at 19-10 and squarely on the bubble. A loss today could be catastrophic for their tournament odds. If UNC can get past the Tigers they will take on the red-hot No. 4 seed Georgia Tech Yellow Jackets, which would also be a pretty solid game tomorrow.

The 3:00 p.m. game features two teams that are probably pretty disappointed with the way the year has played out. Both Florida State and N.C State have seen a lot of success in the past, and they probably did not envision playing in the 8/9 game on Thursday. The matchup between Cierra Bravard and Bonae Holston inside should be one to watch for. I think this one will be pretty close, but I see FSU getting the victory.

That would set the Noles up with a date against Duke tomorrow, where they will seek revenge for getting swept during the regular season. Bravard will also be looking to improve upon her rather pedestrian (for her) 11 points and five rebounds during the two games.

Wake Forest vs. Virginia Tech will be the third game of the day, and I fully expect the Deacs to pick up where they left off last weekend against the Hokies. Virginia Tech was thoroughly outmatched in all facets of the game, and it would be difficult to see a scenario where they could overcome all of their deficiencies over the span of four practice days. I think the Deacs will look to pound the ball inside again and use Secily Ray, Sandra Garcia and Lindsy Wright to dominate the Hokies inside.

Assuming Wake gets the win tonight, it will put them in the position to get a win against No. 2 Miami that could catapult them into the tournament. The Deacs took a beatdown in Coral Gables earlier this year, but I believe this is a different Wake Forest team than it was in the middle of the year.

The final game of the night will pit the No. 6 Cavaliers vs. the No. 11 Eagles. UVA is probably safely in the tournament at this point with a win over the Deacs last weekend in Charlottesville, but they don't want to flirt with a loss to Boston College at this point in the year. I'm guessing that UVA will take care of business tonight and set up a matchup with their rival No.3 Maryland. UVA kept it close against Maryland in College Park, but got destroyed in UVA.

This would probably be the second best game of the day tomorrow behind a potential UNC-Georgia Tech matchup. As always in tournament play you just never know who is going to bring it in a "win or go home" situation. I really expect for UNC, Wake and UVA to take care of business because they are all heavily favored, but I have no idea how the N.C State/FSU game will work out. If I had to guess then I would take the Noles behind Bravard and Natasha Howard, but I could see that game going either way.

Today may not be the most exciting of match-ups, but we've got our Deacs playing tonight as well as a pretty solid 8/9 game. It will likely set up some very intriguing match-ups tomorrow and for the weekend.

Comments are always welcome and make sure if you are in the Greensboro area to stop by and watch the Deacs take on the Hokies at 6 p.m. tonight! GO DEACS!!!