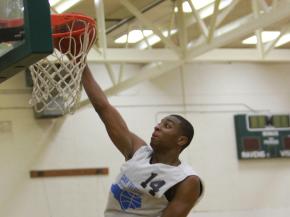 It's been a while since we have had a recruiting update of any kind on here for basketball. We don't have a lot of information right now regarding the 2013/14 classes, which we will certainly gain in the next month or so with the Carolina Challenge on March 24th. We did, however, get the chance to drive over to Greensboro to see Hargrave Military Academy (31-0, #2 in the country for post-grad schools) take on the Guilford College JV team.

Wake Forest commits Codi Miller-McIntyre and Andre Washington both play for the Tigers, and as a matter of fact, are coached by former Deac A.W. Hamilton. Codi was extremely impressive on the night and really played within the offense. Andre got a couple of tacky fouls in the first half, but got a lot of playing time to accumulate a fair amount of rebounds.

Thoughts on both of them, as well as some videos of each of them from recent play are after the jump. This is a must read for anybody interested in the incoming recruits and how they might help us in the future.

This is Part I of a three part series checking in on the 2012 Wake Forest commits as they finish up their high school basketball careers and transition towards college this summer.

Click through the link for thoughts on Andre Washington and Codi Miller-McIntyre.

First off, we have some videos of interviews/workout tapes/games/practices (etc), and that is followed up with some opinions of tonight and how they will fit in next year and beyond. Evaluations done by our boy Robbie Diesel!

Here we have video we took from last years Carolina Challenge (#14). Notice in the upcoming videos how much muscle mass he has gained since a year ago.

Codi Miller-McIntyre confirmed what we all thought about him, and that is that he is an exceptional basketball player. Tonight, his full game was on display. Codi demonstrated his passing and scoring abilities, and on several monster dunks displayed his incredible athleticism. He was in complete control of the game from the opening tip to the final buzzer. He picked his spots when his team needed scoring, but for the most part he was reading the defense and setting his teammates up with high percentage shots. I was also very impressed with his leadership ability and high basketball I.Q. Throughout the entire course of the game I watched him talk on defense and inform his teammates of what to expect from the opposing team. It was a pleasure to watch him play and he should make an immediate impact for the Deacs next season.

Andre Washington was a very efficient player for Hargrave tonight. He scored 8 points on just 3 field goal attempts. The big man also grabbed 9 boards, was perfect from the foul line, and had 1 block. He was able to do all of this in just a little under 20 minutes of play. What makes it even more impressive is that this is a team that loves to push the pace. There was a shot clock in this game, but they were never in any remote danger of having a shot clock violation. Despite this, he is still able to contribute. His body is still raw, but he has the potential to be be a solid contributor down the road. You can’t teach height, and Andre clearly has that with his 7 foot plus frame. He needs to gain weight and gain some strength too, but the height is there.

Overall, it was a great night in Greensboro. Hargrave Academy took home a 101-84 victory over the JV team from Guilford College. Virginia Tech commit Montrezl Harrell had a pretty big game as well for the Tigers. He will fit in very well in Seth Greenberg's system next year. The conditioning from Hargrave is very impressive, as they press pretty much the entire game. Codi did a lot in his 30 minutes out there, and Andre did a great job of getting up and down the court as a guy with his size.

Look for Part II some time Thursday or Friday (along with a recap of the UVA game tomorrow night). Previews and perhaps a Q and A should be coming at some point tomorrow for the game against the Wahoos tomorrow night as well. Check out Samurai Fooch's article on Mike Scott, as well as Martin's article on Deacs in the NFL combine coming up.