Bring The Goodyear Blimp To The ACC Tournament

Share All sharing options for: Bring The Goodyear Blimp To The ACC Tournament 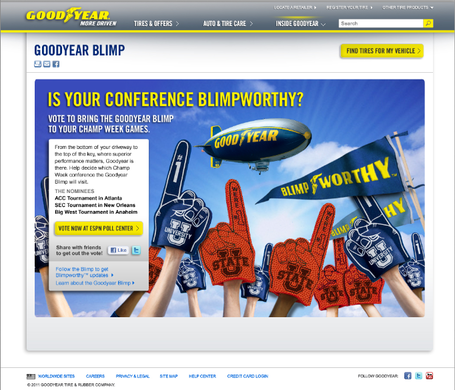 Had this pop in my inbox, and seeing as I'm a basketball and blimp enthusiast, it's nice to see my interests coincide with each other.

From now until February 27th college fans can cast their vote on ESPN’s SportsNation to determine which of these tournaments will be named the first-ever Blimpworthy™ college basketball tournament and bring the Goodyear Blimp to fly overhead.

It's between the ACC Tournament, SEC Tournament and Big West Tournaments, and I'm pretty sure the ACC will win it.

There are a few giveaways in it for everyone, it looks like, including T-shirts (everyone likes those, right?) and a chance to ride in the Goodyear Blimp (which I had the chance to do a few years ago, and is still one of the coolest memories I have).

If you're going to go and watch Wake lose on Thursday afternoon, might as well get the chance to see Atlanta from way up in the air and/or get a free shirt out of it.

So pop in and poll skew away on your Friday.